Director of Paan Singh Tomar Tigmanshu Dhulia on tightfisted critics, producers he could perhaps kill, and what his experience of theatre and television taught him about filmmaking 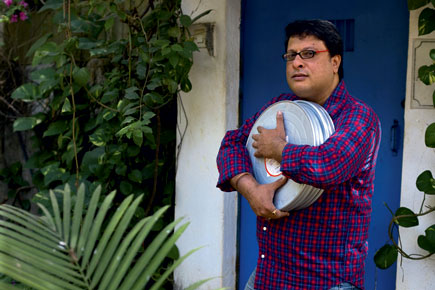 
Bastard, you are calling me after 20 years. What? Why I never thought of calling you? Mujhe laga tu mar gaya hai, saale (I thought you have died),” Tigmanshu Dhulia is telling someone, presumably a long-lost buddy, between quick, impetuous drags on his cigarette. As news of a favourable response to Paan Singh Tomar pours in from all quarters, Dhulia, who otherwise devours his morning newspapers from cover to cover, is only “glancing at the ratings”.

Among his many concerns about his own work is that critics always write glowing reviews of his films, including his last Saheb Biwi Aur Gangster, but rarely hand out more than three stars (Open’s reviewer awarded the film three stars too). “As if that’s the target they have set,” guesses Dhulia. “I don’t know why the content of the review never matches the rating. Maybe they are afraid to give my films more stars because they are worried, ‘What if this film doesn’t become a blockbuster?’”

What Dhulia means, simply, is that if a reviewer feels a film is great, s/he should go ahead and say so. The legendary Chicago Sun-Times critic Roger Ebert once put his finger on this culture of nose-in-the-air criticism: ‘I sympathise with the effort to get a film made at all. I approach a movie with hope, not suspicion. I have an open mind about films that provide their audiences with what they’re looking for and try not to be a snob about that.’

“Exactly,” exults Dhulia. Paan Singh Tomar is his fifth film. Although it opened with little hype, it has won praise for its compelling narrative track and Irrfan Khan’s heartfelt turn as a sprinter-turned-outlaw. It was in 1991, at producer Bobby Bedi’s office while doing research on Shekhar Kapur’s Bandit Queen that Dhulia first read about Paan Singh Tomar in Sunday magazine (published by the Ananda Bazaar Patrika group). He decided right there that whenever he would make his first film, it would be on this man. “My first reaction was, ‘How can a man be so many things in one lifetime?’’’ To Dhulia’s dismay, Paan Singh Tomar  seemed jinxed right from the word go, as he kept losing the magazine that was his entry-point material.

Then, there was the long hunt for a like-minded producer. “I have always had this problem—this producer thing, this producer problem. Whenever Anurag [Kashyap] and I meet, and that’s not very often, we only talk about how we could kill our producers.” Maybe because they don’t make conventional love stories? “Maybe, maybe…” he replies, nodding. “Everything is dictated by commerce in Bombay… ‘How much money can your film make?’ I am not saying money is not important, but there should be a fine balance between aesthetics and commerce.”

The scenario isn’t as bleak as it seems, though. Dhulia says that every once in a while, his faith in movies being a labour of love and passion is restored when he watches works of contemporaries like Raju Hirani, Anurag Kashyap, Dibakar Banerjee, Imtiaz Ali and even Sanjay Leela Bhansali.

Bhansali, eh? “Certainly,” he reaffirms, “I may not agree with all of Bhansali’s films, but you can see that here is a man with extraordinary passion for cinema. Similarly, Raju and Dibakar surprise me all the time. Dibakar, I have never met—and I don’t even know him, but I think his Love Sex Aur Dhokha defied this perception that ‘content dictates form.’ Sometimes, I feel I can make a film like 3 Idiots, but I am not sure if Raju would like to make the sort of cinema I do.” He taps at his cigarette lightly: “Raju must stick to what he is doing. He is doing excellent work.”

He comes across as a man with no insecurities, speaking well of his peers. He was born in Allahabad, Uttar Pradesh, to working parents of Garhwali descent, and raised in a literature and history-loving family, comfortably middle-class. His father, who passed away many years ago, was a lawyer and judge, while his mother is a Sanskrit professor. The undercurrent of local politics in his cinema—brutal campus politics in Haasil or the protagonist’s political ambition in Saheb Biwi Aur Gangster—can be attributed to “dinner conversations at home.” “They always revolved around politics. For a long time, I was only a mute spectator. I would listen without ever saying what I felt about a particular situation.”

Dhulia left Allahabad by train for the capital as a wide-eyed wannabe, entranced by the “Delhi theatre culture of smoke, booze and babes”, promising himself never to return until he made it big.  He trained as an actor at Delhi’s National School of Drama (NSD), but while his acting career, a move he calls ‘misplaced’ in hindsight, didn’t get him anywhere, he ended up learning a great deal from theatre. “The biggest lesson from theatre was how to make movies cheaply,” he says, “because theatre is a medium of minimum resources.” That, plus the art of using actors and their talent effectively. “I never over-instruct my actors. I let them be, like in theatre. Ingmar Bergman’s actors, for instance, are so expressive, and that definitely comes from his love of Henrik Ibsen and his passion for plays.”
It was also in theatre that he met the man who plays Paan Singh Tomar, Irrfan Khan, his long-time muse who was his senior at NSD. “Before that, I think, he was a part of the gang of bullies who were ragging us. I am not sure, though,” he says.

Another influence was TV, or more accurately what he picked up in that phase of his career, especially when he was involved in the making of the Star Bestsellers series and Naya Daur, a show based on Bhagwati Charan Verma’s Hindi novel Sabahin Nachawat Ram Gosain. “Drama. That is what television taught me. How to keep your viewers engrossed,” says Dhulia.

A small poster of Fritz Lang’s Metropolis shares the wall with Federico Fellini’s 8 1/2 in his living room. Dhulia calls himself a student of cinema and says he constantly learns from the works of other filmmakers. “There is a scene in Paan Singh Tomar where Irrfan tells his son that he is not [just] his father now, suggesting he is a dacoit. It’s a very private moment in a very public place where there is lots of activity. I picked that up from Mani Ratnam when I was working for him on Dil Se. Mani sir does such scenes beautifully.”

Despite being in the industry for two decades, Dhulia feels like an outsider, and Bombay, he maintains, is not the kind of place where he would like to put his feet up and retire. “Culturally, Bombay has no future. I am here only because it allows me to make films. I always felt I belonged to Delhi—or I would like to stay in Dehradun with my mother. Recently, I remember, she was humming a tune that my father used to when I was a kid, and I thought, ‘Ek din toh Bombay se jaana hai—wapas ghar (One day, I have to leave Bombay, get back home).”

“Look, I am in no way saying that Bombay—or Mumbai—does not have its culture. It’s a wonderful place. But we are making films for the Hindi-speaking belt, and Bombay is more of an English-speaking culture now. I find this conflict strange.”

But this is how life is in Bombay, isn’t it? Take it or leave it. “You—from Bombay—are doomed,” he sniggers.