The Return of Jackie Shroff

India’s own Marlboro Man, reduced to special appearances in Hindi cinema, sizzles as the sexually jinxed gangster of a Tamil noir film 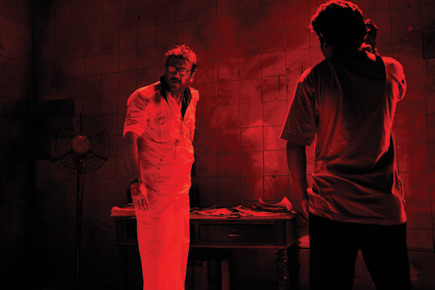 India’s own Marlboro Man, reduced to special appearances in Hindi cinema, sizzles as the sexually jinxed gangster of a Tamil noir film


Move aside DK Bose, for trying too hard. The backstreet boys of north Chennai are wielding guns and whipping knives faster than you can say Muthukumar. This is besides plotting techniques to get laid, and swearing with words that would make a truck driver’s ears flame. It’s all in Aaranya Kaadam a title inspired by the jungle canto of The Ramayana.

This is the film that walked away with the Grand Jury award at the South Asian Film Festival and had its world premiere at New York in November 2010. Back home, the abuses, nudity and allusions to Tamil superstars led to a recommendation of  52 stentorian cuts of the Censor’s scissors, and after escaping the nicks and cuts, hit cinema halls in India in June 2011. Aaranya Kaadam has been hailed as a noir venture into the dangerous zone of Tamil badlands, or the jungle where bad men and gamine molls fight for survival. It blends in the dizzy pace and dark drama of Tamil comic books, hawked on pavements and peopled with square-jawed men with hooded eyes and iron fists and hapless women asking to be rescued.

In the midst of rascals who cuss and kill in the film prowls an ochre middle-aged Chennai Corleone, Singaperumal, grizzled and leonine, losing his grip over his group of nasty gangsters. It’s Jackie Shroff—hailed once as a smoky and brooding hero of the 1980s, smouldering above a slogan that went ‘It takes a Charminar to satisfy a Man like you’—in a never-before seen role in a Tamil film. He goes “Eee”, baring his fangs, foaming at the gums while brushing teeth in the morning, and trots and swishes his veshti, swaying his hips to the swinging beat of Ilaiyaraja’s 1980s chartbusters playing on the radio before going for the kill. He is a defanged don, lording over hoodlums who no longer salute him and lying impotent in the arms of his winsome mistress.

Why Jackie Shroff? Well, considering that it’s small parts and special appearances that have been his mainstay in the past five years in Hindi cinema, Shroff has kept himself busy by acting in Telugu and Malayalam films. But there’s a deeper reason too. Aaranya Kaadam’s producer SPB Charan says, “Many Tamil actors had turned down the role as they found it controversial.” What goes unsaid is that in the image-conscious and machismo-ridden world of Tamil cinema, leading actors did not want to play a gang leader who is sexually defunct and can no longer boss his thugs around. “Jackie listened to the narration of director Thiagarajan Kumaraja and heard me spell out the terms over the phone, and he was on board,”says Charan.

The film’s opening shot has Jackie toss his moll on a bed, only to fail in the act and turn violent and abusive as she whimpers that he’s powerless. And as the film hurtles towards its climax during the crazy events of one day, Jackie tries to clumsily seduce his moll again and stomps naked in the boudoir, humming to a wicked tune. While Bollywood’s hunks flash their bottoms, Jackie drops his clothes and saunters around full monty. “The censors were worried about that bit,” chuckles Charan, adding that with a crotch pad on, “Jackie was absolutely cool” doing the buff act.

Shroff has been the original cool dude, a model who walked into Hindi cinema for a lark. He had been known as Dada, a euphemism for a bully, at Teenbatti in Mumbai. He had wanted to play villainous roles before Subhash Ghai made a rakish if silken Hero of him in 1983. While admired for his machismo, Shroff had been dismissed as a wooden model until he won Filmfare award for playing a trusted lieutenant of a Tamil thug in Parinda in 1990. He has acted in more than 150 films, and with a growing middle and thinning mop, has lately only been seen in special appearances in Hindi films.

At long last, in Aaranya Kaadam, we see glimpses of his original talent when Shroff brings in a touch of whimsy to the role of a dreaded character in a language he’s unfamiliar with. Though he had his voice dubbed, Shroff plodded through the Tamil oaths and growls, with the director prompting him, and learnt his lines through transliteration and by picking cues and nuances.

The old beast can still pack a punch. It’s the unlikeliest of roles, but Jackie Shroff makes evil engaging.