The Politics and Poetics of Rajinikanth 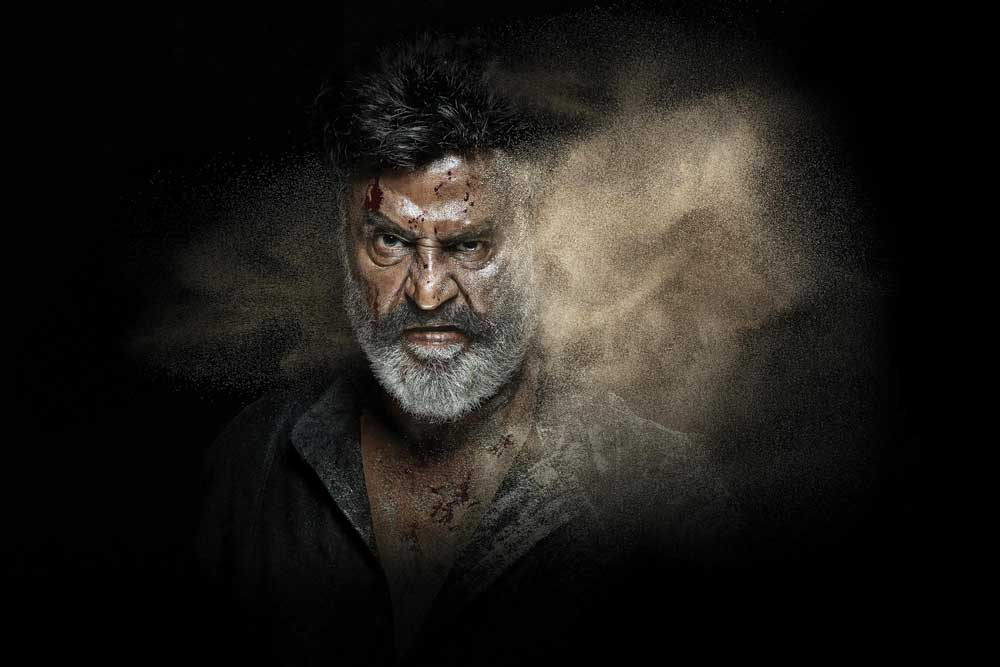 HALFWAY THROUGH Kaala, the latest Rajinikanth starrer, Harida, played by Nana Patekar, visits Dharavi, the turf of Karikalan alias Kaala. The host invites the politician into his house and makes the introductions in an act that should level the playing field between the upper-caste Harida and Kaala, a Dalit. Selvi (Easwari Rao) offers the minister a glass of water, which he turns down. He places his hands above the vessel and politely but firmly declines to drink it. When the women of the house remark that Harida seems to be a nice enough person, Selvi is quick to point out that he wouldn’t even touch the water in their house. This scene highlights the politics (of untouchability) of the movie. It is little surprise, then, that Kaala has rightly been hailed as a ‘celebration of the subaltern’, with its well thought-out use of Ambedkar, the slogan ‘Jai Bhim’, the blue flag and other telltale symbols.

The film, mired in controversy before release, has done well at the box office after initial hiccups. Released to less-than-usual hype, Kaala has, according to trade analysts, crossed the Rs 100-crore mark worldwide in just three days.

The film’s release saw stiff opposition from fringe groups in Karnataka, especially on June 7th , the initial date of its release. Rajinikanth’s comments on the Cauvery river water dispute had caused much furore. But by June 8th, the film saw a full-on release in theatres to critical acclaim and commercial success.

Prior to the election results in Karnataka, the actor had said the state should release Cauvery water to Tamil Nadu irrespective of which government came to power. The statement sparked outrage, as the actor-politician’s comments increasingly do, and the new Karnataka Chief Minister HD Kumaraswamy expressed security concerns over the movie’s release. The Supreme Court refused to ban the film a day ahead of its release, stating rather unusually that ‘everybody is waiting for the film’s release’.

Produced by Wunderbar Films and backed by Rajinikanth’s son-in-law, actor Dhanush, at a cost of Rs 140 crore, Kaala is directed by Pa Ranjith and stars Nana Patekar, Easwari Rao and Huma Qureshi in other major roles. The film reunites the team behind Kabali (2016), the superstar’s previous movie, with both cinematographer Murali G and composer Santhosh Narayanan coming on board again. Editor A Sreekar Prasad replaced Praveen KL.

Politically loaded, the film chronicles a protest of the Tamil speakers of Dharavi, as they are led by Karikalan (Rajinikanth) against a land-grabbing minister, Haridev Abhyankar (Patekar). It expertly plays with ideas of black and white, the ruler and the ruled, the government and the citizen.

The film’s director is acutely aware of the space afforded to him and how everything within the frame potentially tells a tale of its own. His story might still be seen as a fable, but Ranjith is responsible enough to keep the fantastical elements to a minimum.

In the 1990s, when Rajinikanth began playing only larger-than-life characters, he spoke for the poor and marginalised. In a scene in Annamalai (1992), in which Rajinikanth plays a milkman, he takes on a politician (Vinu Chakravarthy) after which the man undergoes a miraculous change of heart. All through that decade, even when his films were suffused with politics, his offer seemed to be entertainment. In pop consciousness, the superstar’s movies of that era may have been escapism, but were gratifying all the same.

On the other hand, Kaala lacks a fluent and cohesive plot and is not really a satisfying watch, but plays with the thalaivar’s (leader) image enough to be engaging. The superstar in Rajinikanth is muted as the politics of the movie takes precedence. With his New Cinema influences, Ranjith is concerned about the subaltern of Dharavi and keeps the plot believable, especially in the movie’s first half. The film is well-researched and has moments of extraordinary acting from a well-chosen cast.

Many scenes aptly and amply illustrate the strength of the performances. Like, when Kaala first meets Zareena (Huma Qureshi), the romance in the air is palpable even after he asks the woman from his past not to address him as Karikalan anymore (following a particularly intriguing dinner scene).

Rajinikanth offers the best of his theatrics—the style, the walk, the self-deprecating comedy, and, on occasion, that fleeting moment of mature romance. Unlike Billa, Annamalai or Padayappa, Kaala is a complicated man—a leader with a propensity for violence who seems to seethe under the surface. His politics may be simple and clear-headed, but his personal life definitely is not; he is torn between tinges of romantic feelings for a Muslim woman and a more pragmatic relationship with the wife from his hometown of Tirunelveli.

His sons are diametrically opposite—Lenin, the youngest, believes that the system ultimately delivers and wants to make it better, and Selvam, the eldest, is more like Sonny Corleone from Godfather, with his violent ways and devil-may-care attitude.

Patekar’s Harida is probably the most caricatured of the roles in Kaala, but both director and actor manage to bring some refreshing aspects to the portrayal. The pre-interval scene in which Kaala traps Harida inside Dharavi may be the most thrilling for Rajini fans, but is also a testimonial to Patekar’s subtler acting skills. A scene with Sayaji Shinde is laugh-out funny in which a smashed Kaala keeps asking the politician who he is.

The movie doesn’t exactly write out Rajinikanth, the superstar. His soft and harsh sides, perfected in Baashha (1995), return to impress us. The opening scene expertly captures both—a ball faced by Kaala is declared wide after it removes middle wicket during a cricket match, and, in the subsequent sequence, he strongarms and stops the razing of a dhobi ghat in the middle of the slum. Rajinikanth has never been averse to playing older roles, but in Kaala, his younger self is present only in animation, which must be a first.

Many pages are being written on how the politics in the movie can be linked to the more pertinent one outside the confines of filmdom. Cynics say that it is all puppetry—politicians and actors (the lines between the two have long been blurred in Tamil Nadu) using a volatile situation to achieve their own ends.

Rajinikanth has drawn flak for his comments on the Cauvery issue as well as his widely televised statement on the May 22nd Thoothukudi killings over a protest against a Sterlite copper smelter. To summarise, he said that such protests would turn Tamil Nadu into a graveyard. His comments were perceived to be anti-protest and angered nearly everyone.

When Kabali was released, Rajinikanth had not entered politics the way he has now. The anticipation of his political launch had been in the air for an unlikely 15 years. It is widely thought Baba (2002), which was more political than Kaala (at least to me as a film critic), should have ensured the superstar’s new career. But that movie’s dramatic flop led to a see-saw of comments from the actor over the years, which seemed neither well thought-out nor focused.

Rajinikanth continues to hold his political cards close to his chest. With his political path still dark, the superstar hits the headlines often, even if what he is saying is not always clear. His phrase ‘Aanmiga Arasiyal’ (literally, spiritual politics) has got him widespread derision from critics. Apart from his comments on the 126-year-old Cauvery dispute and his ‘blind’ backing of the project to unite south Indian rivers, Rajinikanth has never made it clear what his political ideology is (Kaala, actually, seems to be better at politics than the actor who plays him).

But 67-year-old Rajinikanth is not unfamiliar with the odds being stacked against him. In 1980, shortly after being written off, he made the trailblazing Billa, a remake of the Amitabh Bachchan- starrer Don. Even his journey until that point was the road less travelled. His negative roles of the 1970s were an unlikely sign of the superstardom of the 1990s. The Marathi bus conductor raised in Bangalore, Shivaji Rao Gaekwad, who was active in theatre right from his school days, has indeed come a long way.

Compared to the squeaky clean onscreen image of the late Tamil Nadu Chief Minister MG Ramachandran, Rajinikanth has played more complex roles. In his debut in K Balachander’s Apoorva Raagangal (1975), he played an abusive husband. In Moondru Mudichu (1976), his character lusting after his best mate’s lover, rows away indifferently even as the friend (played by Kamal Haasan in an extended guest role) falls into a lake. His cigarette manoeuvre, which originated in that movie, has endeared him to movie-goers down the decades. Here was an actor who could woo the audience by merely running his fingers through his receding hairline. The image makeover as a hero of sorts came with the acclaimed Bhuvana Oru Kelvi Kuri (1977). The punch lines came with Murattu Kaalai (1980). The acting credentials came with Mullum Malarum (1978).

By the 1990s, he was the reason why there were no superhero movies in Tamil. With the astonishing success of Sivaji (2007) and Enthiran (2010), he grew his lead over the other stalwart of Tamil cinema, Kamal Haasan. On the internet, Rajinikanth was the homegrown Chuck Norris with many of the American actor’s jokes being reworked to suit the superstar (The gag that Rajini alone could close a revolving door comes to mind immediately).

Then came the brief but well-advertised periods in various hospitals, including one in Singapore, followed by the disastrous failures of Kochadaiyaan (2014) and Lingaa (2014). Critics queued up to write him off once again.

Meanwhile, Pa Ranjith had joined a gutsy and upcoming group of directors making New Cinema in Tamil. With films like Sethu and Kadhal, Tamil cinema ruthlessly abandoned the dreamy, fantastical style of the 1990s. With the turn of the millennium, the movies got real, urgent and spoke to life. Ranjith joined this elite group with the success of Attakathi (2012) and Madras (2014). He then came under the radar of the superstar’s daughter Soundarya who brought her father and the director together. The story of a Malaysian don fighting for the rights of Tamils impressed Rajinikanth enough to collaborate with Ranjith. The success of that movie, Kabali, brought the two again for another venture, which was announced two years ago.

Now, Rajinikanth has made his chief ministerial ambitions clear. He has said he will launch his own party and announce candidates for all 234 Assembly constituencies in Tamil Nadu. We are still waiting to hear the name of the party. Will Kaala put him in office? That’s the big question.