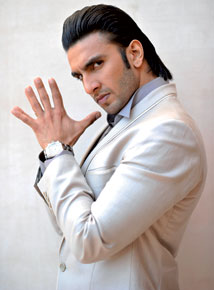 ‘Do you remember Raja Babu?’ It’s not a question you might imagine you’d hear in Ranveer Singh’s bedroom. The actor, however, reminds himself of that corny 1994 David Dhawan movie every single morning.

In homage to Govinda’s bedroom in Raja Babu, Singh has arranged his accessories the same way. A collection of hats and baseball caps are perched on wooden pegs on one wall. On one shelf, there are several sunglasses; on another, bottles of cologne. A floor-to-ceiling closet is filled with rows of leather shoes and funky sneakers. “Pak chik pak, Raja Babu,” Singh sings softly, wiggling his fingers over his collection, before he picks the pair he wants to wear.

Those who know 28-year-old Ranveer Singh describe him as a born performer. Close friend Vikramaditya Motwane, who directed him in this year’s Lootera, says Singh actually arrives at parties with his own boom-box, then puts on a dance show for two hours straight. “His energy is infectious,” says director Maneesh Sharma, who began his career by casting Singh in 2010’s Band Baaja Baaraat. “Ranveer can go ballistic. He’s fun.”

At the start of this interview on a somnolent Sunday afternoon in Mumbai, Singh sits with both feet up in his living room, flings his iPhone dramatically on the couch and yells, “Gaaah, don’t you wish you could throw your phone away sometimes?”

He is just back from shooting his next release, Gunday, in Oman. At a hotel lobby there, Ranveer Singh tells me, a stranger had walked up to him, ruffled the hair on the back of his head and said, with a heavy Arabic accent, “Tattad, tattad”, referring to the now famous ‘dandruff’ dance move from his recent hit Ram-Leela.

You catch glimpses of Ram, the character, in Ranveer Singh. He is affable, hyper-energetic and brazen. “Ranveer is the biggest charmer,” says Sharma. Yet, Motwane and Singh’s Ram-Leela co-star (and probable girlfriend) Deepika Padukone avow there is a quiet side to the actor.

It slips through when he talks of his struggle to break into the industry, his disappointment at being judged and the deep snobbery he faces from stars belonging to film families. At one point, he seems lost for words and pauses, thinking carefully about what to say next.

Ranveer Singh doesn’t show this side of himself often. “I live in the moment,” he says, “I see emotional vulnerability as a sign of weakness.”

Motwane reveals that he had to compel Singh to tap into this restraint for the part of a secretive conman in Lootera. It was a subdued performance with beautiful flashes of intensity. “He always seems like this happy-go-lucky guy, yet when I watched Ranveer at home, I realised he has a quiet space. He can watch movies for hours alone.”

Ranveer Singh lives with his parents in a large duplex apartment facing Khar Gymkhana club and good-naturedly pokes fun at his mother’s exquisitely-carved silver antique collection adorning the living room. “Every few days, I see a new piece. I say (mock-angrily), ‘Ma, you bought more silver?’ She’s like, ‘Your wife will thank me someday.’”

The actor prefers to stay holed up in his den in the downstairs apartment. There are four La-Z-Boy recliners against one wall, a blank projector on another and a state-of-the-art surround sound system. There are no books or magazines. This is a change. Most actors discuss bestsellers and biographies of Hollywood legends, so I ask Singh if he reads. “Not at all,” he answers, enunciating each word for effect. “The last book I read must have been Noddy.”

Ranveer Singh has always wanted to be a Hindi film actor, voraciously watching Govinda movies when he was a child. Motwane adds that Singh shares his own talent for remembering the lyrics to the songs of 90s ‘rapper’ Baba Sehgal. “I tell him, ‘Okay, I was 16 when Baba Sehgal was big, but you were a six-year-old kid. Why do you know this? I think he just watched a lot of television growing up.”

Ranveer Singh didn’t come from a film family. His father, Jugjeet Singh Bhavnani, has businesses in hospitality, garment exports and medicines. Motwane says Singh and he hit it off instantly because they were both Sindhi boys who grew up in Khar. The only tenuous film connection was that Sonam Kapoor is Singh’s second cousin, but that didn’t give him much hope.

“I looked around me and all I could see were Abhishek Bachchan, Hrithik Roshan, Tusshar Kapoor, Zayed Khan… Shah Rukh Khan seemed like a freak case 12 years ago and it didn’t seem enough for me to commit to a film career,” says Ranveer Singh.

When he was 15, Singh decided he would be a copywriter. That was also around the time he shed his childhood puppy fat, and the star finds it a peculiar irony that he’s viewed as a sex symbol today—especially since his super-buff avatar in Ram-Leela.

“I get very explicit messages on Twitter. I love it. I was a chubby kid and craved female attention. I went to America on a vacation and came back from the land of junk food looking thinner, but I still felt like a fat kid in my head.” It was while he was pursuing media studies at Indiana University, Bloomington, in the US that he began taking acting classes. He came back and interned at ad agencies Ogilvy & Mather and JWT, working on brands like Good Knight, Ponds and Mattel, pitching campaigns that would resonate in small towns.

Singh struggled for four years to get acting gigs, even as he worked on ad films with Bunty Aur Babli (2005) director Shaad Ali. Singh admits there was prejudice within the industry. He knew he wasn’t considered good-looking, but it made him strive harder.

“I have a problem with elitism, with people being condescending on the basis of what they’re born into. Nothing grinds my gears more than that. There is an inner cynicism [I’ve developed] over what I went through.”

Maneesh Sharma was auditioning newcomers to star in Band Baaja Baaraat in 2010 when he saw Singh’s tape. “It was the scene where Bittoo gatecrashes a wedding and meets Shruti,” remembers Sharma. “He was perfect. There was a lot of hunger in him to make it.”

Success came overnight and Ranveer Singh says he couldn’t cope. “It was like Alice In Wonderland. I was in this magical garden, all wide-eyed and saying, ‘Whoa, what is this?’ I didn’t know how to handle being a public personality.”

After a bunch of interviews, Singh was labelled cocksure, annoying and attention-seeking. The actor says he’s learnt some tact since, even though he finds it ‘taxing’ to lie. “I hold back if I feel like it will ruffle a few feathers. I don’t want to deal with the consequences.”

One of these ‘consequences’ was Kareena Kapoor dropping out of Ram-Leela. After Singh gushed about her during a garrulous session on the TV chat show Koffee With Karan, Kapoor didn’t want to be his co-star. “Now I don’t feel that rush of excitement [for her]. My feelings have waned. (laughs) I’ve grown up. I was effusive about my admiration, but I didn’t do anything wrong. It came and bit me in the face. People really judge you.”

A severe back injury on the sets of Lootera gave Ranveer Singh plenty of time to reflect. Laid up for most of 2012, the actor didn’t have a release in 19 months and he sees it as a slump. This year, the tide has turned. The star says he has more clarity and it comes with popular validation of his work.

In a way, Kapoor’s walkout from Ram-Leela made room for something greater: Ranveer Singh’s combustible chemistry with Padukone. He is tight-lipped about dating her, yet it is clear the two had an instant bond, first noticed at the premiere of Shirin Farhad Ki Toh Nikal Padi in August 2012, where the couple only had eyes for each other.

In October this year, Ranveer Singh admitted to Bombay Times that he was madly in love. “I was drugged out after an attack of dengue,” he says now, “I was loopy and stupid [during that interview]. I don’t want to put my personal life on display. It takes the focus off my work.”

As for his work, the actor is mixing it up. Gunday, the 70s-style action-romance from Yash Raj in which he co-stars with Arjun Kapoor and Priyanka Chopra, is out next, in 2014. On 29 November, he begins shooting for Shaad Ali’s comedy Kill Dill, which also stars his ‘guru’ Govinda, and soon after that, Zoya Akhtar’s film, in which Priyanka Chopra and he play dysfunctional siblings.

Does he know that he’s considered ‘The Contender’ to Ranbir Kapoor? “Ranbir leads the pack of young actors,” he acknowledges. “People do a ‘versus’ between us—Ranbir vs Ranveer—[but] it’s not my doing. My movies are my own and I look at my directors. My wish list is huge.”

His ambition doesn’t seem to outmatch him, though. Motwane attests that Ranveer Singh has an outstanding work ethic and that he is driven to succeed because he knows he isn’t blue blood, or an insider.

He is slowly getting used to fame, too. It rankles when people take his picture in public, he says, but he enjoys making fans smile, even for a few seconds. He loves getting movie tickets at the last minute on an opening Friday, and is happy he doesn’t have to wait in line to get into a nightclub or get rejected at the door because he isn’t dressed well enough.

Five years from now, Singh isn’t sure whether his dreams of writing scripts and composing music will come true, or even if he’ll be married with kids.

He does know one thing, however. He knows he will be a movie star.