An actor’s life in Mumbai is not only about the big screen. The young and enterprising are busier than ever before 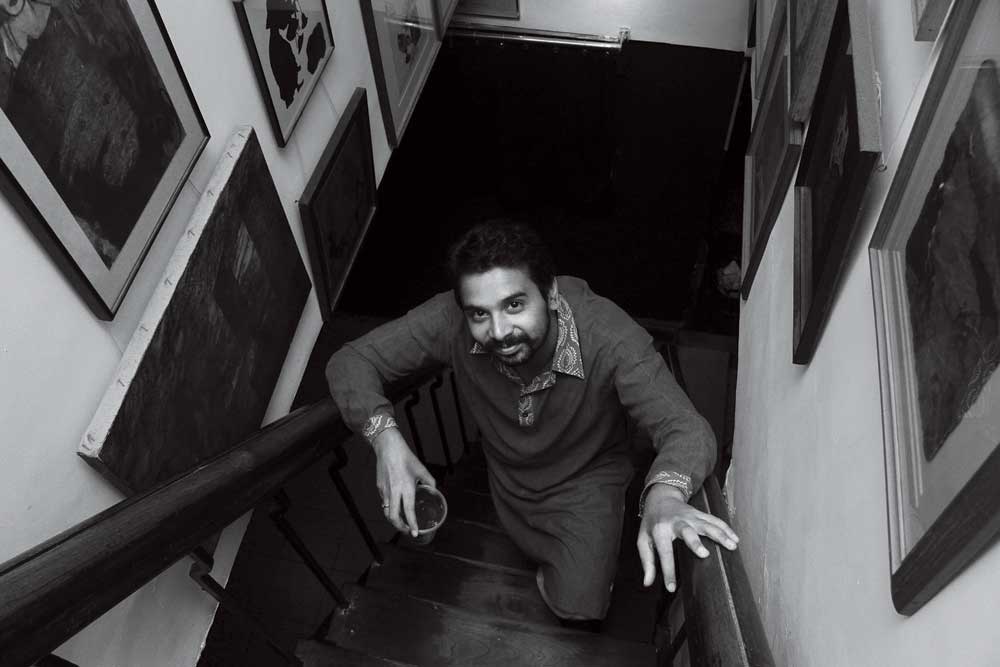 ANUSHKA MENON, 22, sits quietly in the corner of an audition room awaiting her turn. She is surrounded by girls adjusting dupattas across their chests and clinking their ghungroos. These actors are auditioning for the part of a Bharatnatyam dancer for an ad film for an energy booster drink. She’s tenth in line and after waiting for about 30 minutes, she trips during her screen test. She gives another take, but her nervousness shows. On her way out, she sends a WhatsApp message to the casting director. ‘I was a bit off there. Lack of practice. Shall I come in and retest tomorrow?’ No response. She wishes it had gone better, but she isn’t too disappointed. Anushka’s got two other auditions on the same day, and she’s expecting a call back for an upcoming web show about a group of college students new to Mumbai.

This is her fifth month in the city and she has already shot for two ad films and one short film and is happy she’s managed to make this month’s rent. “I thought the fact that I don’t know Hindi will be a big problem here, but I think I’ll manage,” says Anushka who graduated from a government engineering college in Kozhikode last year but wants to be an actor. Her parents have given her a year to make it in Mumbai, but she believes she will manage to extend that deadline. Later that evening, her phone buzzes. ‘You have been shortlisted for the Bharatnatyam commercial,’ the message reads.

Not everyone who comes to Mumbai finds work as frequently and easily as Menon has. Chances are that eight out of ten actors you meet in the city haven’t seen the front of a camera or the steps of a stage for months. Gyms are still their most regular hangout and being present on a film set almost feels like a luxury. But there are others, who wake up every morning, exercise their spines and vocal chords, enact and reenact scenes in front of the mirror and take a part only if they are convinced of it. Prospects are looking up, and significantly so for them.

From a web show being launched every three weeks to short and long films being created on smart phones, to a wave of videos that have made YouTube sensations out of nobodies, to international players like Netflix and Amazon engulfing the Indian market with new films, the Mumbai actor may finally be stepping out of the infamous ‘struggling artist’ zone. No longer are they waiting for a single producer-director to fund their dreams of becoming a superstar. Their ambitions are more realistic, their options extensive, and their entrepreneurial skills sharper than before.

“I find this whole idea of being a struggler a bit romanticised anyway; it’s an illusionary story of actualising one’s dreams.

You keep working, keep at it. Rejection will come, but if you know this is what you want, no one can tell you otherwise

It’s like only if you’re struggling are you considered an actor. Honestly, I don’t want to be a victim, I don’t want to live hand to mouth. I want to be able to afford a car, a bigger house and fulfill all my worldly desires through my profession,” says Mansi Multani, who won a spot of fame for her play Piya Behrupiya and her authentic airhostess act in AIB’s Honest Indian Flights video. Delhi-girl Mansi who has been in the city for six years now primarily sees herself as a stage actor, but is not complaining about the other opportunities that have come her way, especially in the past year.

She just spent all of July in the US with Rajat Kapoor’s play What’s Done is Done; The Great Escape, a television show she acts in, just premiered on Epic channel, and she is reeling from the response her recent online film on Raksha Bandhan has received. “There have been times I have slapped on make-up and waited for two hours for an audition I couldn’t even relate to. Today, I only take up work I believe in because I have so many avenues to support myself. Today it’s easier to be frank, even blasphemous, to connect with the truth through our work, especially on the web. And it is so satisfying as an actor,” she says.

For actors associated with the AIB group (which featured in 2015’s Forbes’ India’s 100 richest celebrities), and The Viral Fever, who work on at least four web shows simultaneously, the online explosion has opened up many avenues. Naveen Kasturia started his acting career with the indie film Sulemani Keeda, and made it to the favourite list of every YouTube buff in India with his show Pitchers. He says, “I started off as an assistant director on this film called Jashan and then to films by Dibakar Banerjee, and I’d always think I did not have the looks to be an actor. But Pitchers changed the game for me and many others like me.”

I’d always think I did not have the looks to be an actor. But pitchers changed the game for me and many others like me

Here was a show that people took seriously, despite it being on the Net. It raised the bar for other web series. “That’s where the transition for many Indian fiction shows on the web began. People started experimenting and putting up stories out there, stories that were till now just part of a few pages in their diary. I read somewhere that 40 new web shows have been launched in the last two years. Irrespective of how good or bad they are, at least actors are practising their craft and even getting noticed for it. Today, The Viral Fever is launching two shows where they are introducing 8-10 new actors, almost all of them from theatre backgrounds, and that’s a win for both producers and performers.”

Senior actors who came to the city when the profession was considered far less respectable and viable than it is now are as thrilled as they are envious. Says NSD alumnus and acclaimed Hindi actor, Sanjay Mishra, “When I came to Mumbai in the 90s, I remember spending days on vada pav and bananas only. I’d improvise for over-the-top comedy shows once in two months and teach kids sitaar to make my rent. I’m not saying the challenges have reduced, but today I am getting more work at 50 than I ever did at 25.”

The idea of one ‘big break’ is slowly fading, as actors are now exploring everything from experimental short films to independent festival releases. “I waited for 10 years for a film like Lunchbox to come my way, but today several Lunchboxes are being written purely because of the change in demographics and the mindset of people. A good story that would otherwise be lost in a script is now coming to life because creating and showing a film is that much easier today,” says Nimrat Kaur, who plays the housewife in Lunchbox.

I find the whole idea of being a struggler a bit romanticised. It’s like only if you’re struggling are you considered an actor

Actor Manoj Bajpayee recollects the time he used to perform for assistant directors during lunch-breaks on a film set. Today he sees numerous casting websites and casting directors waiting for good actors to come test for them. “I wish I was in my 20s today just because of the kind of scripts being written. These are stories that defy formats, mindsets and clichés in every way. I did a short film called Taandav that reached out to more people than many of my features even did. That gives me a lot of hope,” he says.

For those like Namit Das who started performing at the age of 17 and dabbles in at least five different mediums, it’s about finding opportunities within existing constraints. “I don’t think it’s become easier for an actor. In fact, there are so many of us now that we have to really prove ourselves. We are shooting cine plays shown on television; that means we are getting paid to do theatre even, which was almost impossible till sometime back,” says Das who recently played the lead in the Indian adaptation of Everybody Loves Raymond, directed his first music video with singer Mansi Parekh, is a favourite face for TV ads, and is also part of Mira Nair’s Broadway musical Monsoon Wedding.

ALSO CALLING FOR Indian faces are a gamut of international films, TV shows and online productions. Indian characters and plotlines are now a part of many US and UK shows. Seher Latif, famous for casting Indian actors in international films, just wrapped up casting for ITV’s The Good Karma Hospital (a UK-based web series set in Goa) and BBC’s McMafia (a drama series about organised crime including Mumbai’s underworld) and says she hasn’t been busier. “A lot of Hollywood studios have a mandate to show diversity within their shows and India cannot be ignored in especially a multi-cultural story. There are shows like Sense8, Indian Summers and now McMafia where the Indian diaspora is being explored to a great extent and that gives young actors opportunities that were almost impossible a few years back. I wouldn’t have had a career if international studios did not realise the potential of the Indian film market,” she adds.

It is also speculated that online giants like Netflix and Amazon are investing over Rs 100 crore each to collaborate with Indian production houses for movies and TV shows to be exclusively released on their platform. That means not just actors, but directors and writers can aim for a vast variety of good work. Says filmmaker Devashish Makhija, whose short films Taandav, Agli Baar and Elaichi have been bagging attention and awards, “What’s different about now is that the wherewithal to make it happen is more in our hands than ever before. If an actor wants to make a sketch or short film on their own, there is a [good] chance of finding an audience without having to go through any intermediary. The walls between creator and audience have disappeared. It’s the best time [might get better] to be making what you want to.”

But this scenario of more opportunities and venues should not undercut the challenges that actors still face. Nepotism still riddles the industry, and new actors and directors continue to face financial struggles. But now, with hard work and talent, more dreams are being realised than before. Twenty five-year- old Ajitesh Gupta, before his play at Prithvi Theatre, says it best: “I am from Sitapur. I came to Mumbai six years ago and I don’t think I’ve had a single day of not doing anything, or waiting for work. If I don’t have a shoot, I write a poem. If I don’t have a rehearsal, I go assist backstage. If I don’t have an audition, I take a workshop or go perform live. Recently, I had little work, and I was home reading a story by Premchand and I decided to turn it into a script. Now I’m collaborating with a friend to write our first feature. You keep working, keep at it. Rejections will come, but if you know this is what you want, no one can tell you otherwise.”