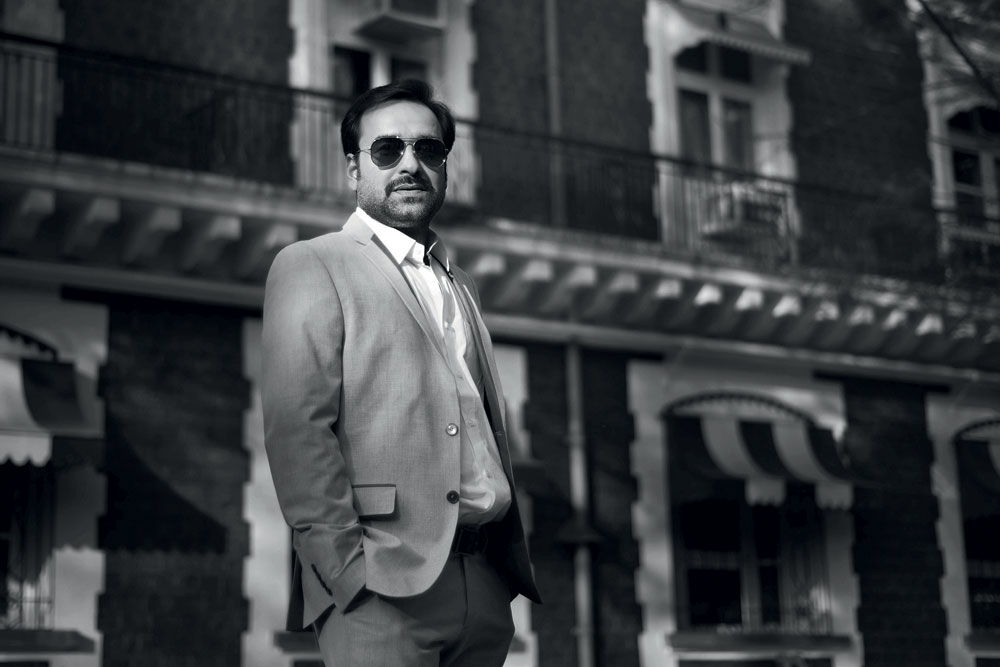 
At some point in 2004, after a year of cooking for a senior actor so he could stay in his home for free, he said to himself: ‘Have I come to Mumbai to be an actor or a cook?’ He took his few belongings and decided to redouble his efforts to look for work. Nothing much changed from when he had first come to Mumbai in 1999 in search of work armed with a diploma from National School of Drama (NSD), but slowly and surely Nawazuddin Siddiqui made his way through the innards of Mumbai cinema to emerge into the light. He’d been limited to a bit role in Black Friday (2004), a cult song, ‘Emotional Attyachaar’, in the cult movie Dev D (2009), a 9/11 detainee in New York (2009) and a smalltown journalist in Anusha Rizvi’s Peepli Live (2010), produced by Aamir Khan. But his world changed in 2011 when Patang, a Prashant Bhargava movie, won him rave reviews at international film festivals. Gangs of Wasseypur happened the same year and Faisal Khan became the first of many fully realised iconic characters from Siddiqui.

But Siddiqui says he was prepared to wait for as long as possible. “I am an artist, I have come here to work. There is no timeline for success here,” he says. And this despite the understanding that “with my kind of face” the roles that come to him are already restricted. The advent of streaming has altered the game for those with unusual faces and unique backgrounds but “formulaic cinema in India hasn’t changed. It still needs a goodlooking boy, a goodlooking girl, five songs and a happy ending”, says Siddiqui.
Actors such as Siddiqui, Pankaj Tripathi, Neeraj Kabi and Jaideep Ahlawat have seen stellar success during the lockdown in particular with the playing field forcibly level. With no theatres, no exorbitant ticket prices and no restricted windows for smaller films, the four actors are living proof of the democratisation of the industry even as a bitter debate rages on about insurmountable barriers erected by those who control the commanding heights of the film industry. With movie premieres on streaming services, the rise of longform series which require characters to be more than merely pretty and the need to reflect the diversity of audiences, a new hero has emerged.


“With so many platforms, this is a great time for storytellers and talent to explore layers and develop subplots as well as characters,” says Pankaj Tripathi, actor

Siddiqui, 46, shone in the lead role of Inspector Jatil Yadav in Honey Trehan’s directorial debut, the recently released Raat Akeli Hai on Netflix, and has another film, Sudhir Mishra’s Serious Men based on Manu Joseph’s novel of the same name, coming up. Pankaj Tripathi, another Gangs of Wasseypur alumnus, was tender and tough as Janhvi Kapoor’s father in Netflix’s Gunjan Saxena: The Kargil Girl and is getting ready for his second season as Mirzapur’s inscrutable Kaleen Bhai on Amazon Prime Video. Yet another Gangs of Wasseypur classmate, Jaideep Ahlawat, was the star of Amazon Prime Video’s irresistibly dark series Paatal Lok, where he faced off against Kabi’s suave and narcissistic TV anchor.

The new hero can disappear into the role he plays with such felicity that it is sometimes difficult to recognise him. Kabi, 52, is one such self-taught actor who came to Mumbai in 1998 and waited for 21 years doing a series of odd jobs which he refuses to elaborate on, saying he has nurtured these secrets for so many years. The actor, a student of management at Symbiosis University in Pune who dreamt of a corporate career, fell in love with movies in the city that hosts the Film and Television Institute of India (FTII). When he couldn’t get into NSD, he took its syllabus and found his own teachers across the country, whether it was training in Kathak or Kalaripayattu. While doing theatre and acting workshops he attracted the attention of visionary director Anand Gandhi who cast him in Ship of Theseus (2013) as a mournful monk. Kabi finally knew it was worthy of his talent and his performance immediately won him fans across the board. From being on the periphery, he was suddenly being courted by two stalwart directors simultaneously. Vishal Bhardwaj wanted to cast him as Tabu’s second husband in Haider while Dibakar Banerjee was keen to cast him as the villain in his ambitious Detective Byomkesh Bakshy! Kabi recalls Banerjee saying to him: “People are going to grab you now, but don’t give yourself to just anybody.” He had given Banerjee his word so he waited for him, following that role with others as the father in Meghana Gulzar’s Talvar (2015), DCP Parulkar in Netflix’s Sacred Games (2018) and National Security Advisor Shailesh Malviya in Sony LIV’s Avrodh (2020).

THEY ARE ALL united not only in their patience and perseverance but also the refreshing ‘otherness’ they bring to an industry with a limited gene pool and self-referential storytelling. So Ahlawat, 40, whose Hathi Ram Chaudhry became an instant hit when Paatal Lok was aired, brings with him the lived experience of Rohtak, which he left in 2008 to make his way in Mumbai. It’s a place he still goes back to, to hang out having tea and samosas at the canteen of the Maharshi Dayanand University. He went to FTII and studied acting there, an experience that opened his heart and mind to the best in world cinema. It took him 12 years and pivotal roles in movies such as Raees (2017) and Raazi (2018) before he grabbed the screen time given to him by Paatal Lok with grateful hands. Modelling his walk on his father’s gait, ensuring he gained a paunch and speaking the language he had heard used by many police officers he met, Ahlawat’s Hathi Ram was the kind of loser everyone loves.

“I am an artist, i have come here to work. there is no timeline for success here” says Nawazuddin Siddiqui, actor

Bilal Siddiqi, who wrote Bard of Blood, in which Ahlawat plays the mysterious Tanveer, says: “He’s this really imposing, toughlooking guy but so gentle, polite and friendly. I think what makes him a great actor is his ability to listen and absorb things happening around him even when he’s not in front of the camera. You can see him studying things in silence, probably accumulating things he’s going to use when he’s acting. Despite his tough exterior, he brings a certain vulnerability to his characters and that contrast is rare.” Like his compatriots, Ahlawat is unafraid of the struggle: “Struggle is when you know the job and then you have to make people believe that you know it, and prepare yourself for it. If you don’t, it’s stupidity. Nobody put a gun to your head or told you it would be easy. This is not only the world’s second oldest profession, it is also one of the most cutthroat competitions. But you signed up for it.”

Tripathi, 44, with his love for Hindi literature, brings another kind of authenticity to his roles, whether he is playing a gangster in Mirzapur or a sweet and supportive father in Gunjan Saxena. Born in Belsand, Bihar, he too went to NSD on his third attempt before moving to Mumbai in 2004—in between he trained for hospitality at Institute of Hotel Management, Patna and became an assistant chef at a hotel in Patna. “I told my wife to get a B Ed so that she could teach,” he says, knowing the struggle was going to be long and the earnings infrequent. “I had trained to be an actor so I came to Mumbai to survive,” he says, in a conversation peppered with references from Hindi poets and writers. It took him eight long years before he was noticed in Gangs of Wasseypur but he showed the same equanimity then as he does now.

“You have to be hit by life. There is a loss of dignity, there is shame, but you shed your tears and carry on,” says Neeraj Kabi, actor

Janhvi Kapoor, his young costar in Gunjan Saxena, says, “If possible, he is even more relaxed in front of the camera than he is off it.It is his natural habitat.” She adds,“Some people over complicate it, some are too casual, but Pankaj ji keeps it simple. Even after so many years, there is an honesty and hunger in his acting, yet it is not restless, it is very calm.”

ALL OF THEM bring their backgrounds to their craft. Siddiqui still goes back to Budhana, his village in Muzaffarnagar, Uttar Pradesh, whenever he can, to farm, grow sugarcane, wheat, vegetables. One of the biggest thrills in his life is that Budhana now gets 18 hours of electricity a day, an unprecedented event. Tripathi, a great reader, has been focusing on new Hindi writers during the lockdown. Of his cycle of countless rejections and endless auditions, Kabi says, “You have to be hit by life. There is a loss of dignity, there is shame, but you shed your tears and carry on.”

The first time Anand Gandhi saw Kabi was as Hamlet in Atul Kumar’s rendition of Rosencrantz and Guildenstern Are Dead in 2001. “His face was painted white, he walked on stilts and delivered one of the finest performances I had seen in my life. A decade later, when I was casting for the monk’s part in Ship of Theseus, Neeraj was very much on my mind,” he says. He worked with all the potential actors over weeks of casting. Kabi’s patience, rigour and commitment to excellence were nothing short of being ascetic. “Working with him was constantly surprising and inspiring. For a while, I was worried if any actor will be able to give the part as much as it demanded. Neeraj gave it some more,” he adds.

One of the reasons actors such as Kabi are cast is also to camouflage flaws in stars. Siddiqui has been there, done that with films such as Kick (2014) and Bajrangi Bhaijaan (2015), lending street credibility to commercial blockbusters.

Siddiqui looks at it differently: “Even if one per cent of the audience that turns up for these big movies comes to our smaller films, I will be happy,” he says. It also lifts the tone and tenor of performances all around. When Tripathi played her father in Gunjan Saxena, Kapoor says there was no question of matching up: “All I had to do was be in the scene and react to him.”

“Struggle is when you know the job and then you have to make people believe that you know it, and prepare yourself for it. If you don’t, it’s stupidity,” says Jaideep Ahlawat, actor

Humility and commitment to work are common traits among the new heroes—but as natural traits rather than superficial acquisitions. Trehan has known Siddiqui since before he directed the latter in Raat Akeli Hai. He notes with some awe how inspiring Siddiqui has become. Trehan says, “His submission to his work and complete surrender to the almighty and faith in his craft is what make him stand out and his childlike curiosity to dive down and dig out the core of the character is something special.” With each role, their preparation is different. For Jatil Yadav in Raat Akeli Hai, Trehan says, “He wanted to understand Jatil’s upbringing, his complexes about being darkskinned, about wanting a docile wife. Once he finds his connection with things, he submits himself to the director’s vision completely and I think that faith and non-interfering nature keeps everything smooth.” And more than merely himself, Siddiqui wants the team to win.

Stardom is not the endgame of these new heroes. “Audiences remember actors for their work, not for their red carpet appearances. You will be popular at the most, but you will never be memorable,” says Tripathi.