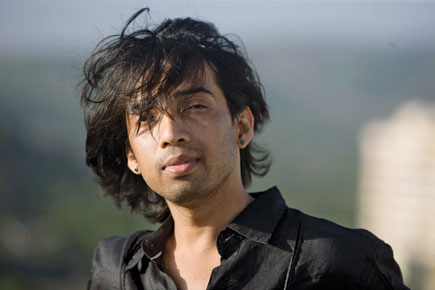 
“As a young boy, I would watch every Hindi film that featured Helen dancing. Bengali households have gamchas and fabrics in plenty, so it was easy to deck up and practise her moves. But then, to dress like Helen I didn’t need too much cloth,” he says, as a playful smile passes over his serious, rather elfin face.

The 14th floor apartment in a Mumbai suburb, where artist-animator Pradipta Ray, 39, sits on colourful cushions on the ground, flanks the busy Western Express Highway. His legs are folded elegantly under him. The nose pin and earrings glint in the half-light of the approaching monsoon. Pradipta is a transgender woman, biologically male. I have come to speak with him about his first big screen appearance—a launda number in Anurag Kashyap’s July release, Gangs of Wasseypur Part 2. A launda dance is a male cabaret for an all-male audience.

But first, his housemates and he, all trangender women artists, drag large canvases out from behind furniture in the room that’s otherwise crowded with artefacts, photographs and lamps. The canvases are almost all painted by Pradipta. They were exhibited, in May, at Kashish, the Mumbai International Queer Film Festival.

But the painting titled Pehchaan is perhaps closest to the story I’m writing. On it, the seductresses of yore, Helen, Sharmila Tagore, Mumtaz, Bindu and Zeenat Aman are frozen in their legendary courtesan roles. A thigh emerges from a long-slitted skirt on one side of the canvas. The women are fire and ice.

Pradipta seats me comfortably on another cushion and speaks slowly, showing little trace of the excitement he must feel at the prospect of his first on-screen dance. He breaks off to address a couple of maids who come in to clean, plump Maharashtrian women who treat him with a mix of girlish giggling and camaraderie. They exchange opinions on the kilo of bitter gourd the ‘sister-in-law’ on the 12th floor had the maids cook the previous day.

But domesticity is only for work day hours here, and Pradipta has come a long way from his middle-class childhood in South Kolkata, where in the 70s and 80s, it was considered shocking to watch Hindi films, in fact even to read Bengali film magazines.

“When I was nine years old, I was made to watch Satyajit Ray’s Pather Panchali. It was depressing to watch poverty and starvation, when all I wanted was to feast on the colour and glamour of Hindi movies. Luckily, there was a power cut halfway through, and I didn’t have to watch till the end,” he recalls with relief.

Even as a child, Pradipta had nurtured electric dreams—of dancing, like Helen, in a Hindi film.

Thirty years along, in February 2011, Pradipta boarded a flight from Mumbai to Benaras. He walked onto a film set, donned a ghaghra choli and heavy make-up, and gave his first take for Gangs of Wasseypur Part 2.

The film features Pradipta in a private launda dance performance, a male cabaret. Surrounded by men, he jerks and sways to a song called Electric Piya. ‘Taar bijlee se patlee humare piya (As thin as wire is my beloved …),’ go the lyrics.

It’s Helen, but she’s made of flesh and bone. The singer’s voice is wire-thin and pitched high, the colours of the song are lurid and in full bleed, reminiscent of Ray’s own Kashish canvases. Chased by a hand-held camera, Pradipta has little space to display his sensual moves. The four men almost overwhelm the dancer with their drunken bump-and-grind.

It is Pradipta’s moment in the sun, his Helen act in today’s reality. It may not repeat itself, and he’s happy to tell me how it all came together. But I first want to know about Pradipta the artist.

“My mother did not take me to the neighbourhood pandal to write on a slate at Saraswati pujo, a Bengali ritual for pre-schoolers, because I was already drawing at three,” Pradipta says, without pride. “I did a Bachelor’s degree in Fine Art at the Government College of Arts and Crafts, Kolkata. Later, I joined the National Institute of Design (NID), Ahmedabad, where I did my PG Diploma in Animation. I continue to teach at NID two months a year.”

From Kolkata, to Ahmedabad, to Mumbai in 2004. To pay the steep rent that the city demands, Pradipta executed professional animation projects. His sights, however, were ever set on Bollywood, and its technical gates opened to him soon enough. He created storyboards for Rang De Basanti (2005), Heyy Baby (2007) and Kambakht Ishq (2009), several ad films, and developed concept art for directors like Ken Ghosh and Nikhil Advani.

But his dream of dancing on the big screen remained just that till he met filmmaker Anurag Kashyap at a friend’s wedding in Chandigarh in December 2009. As Kashyap watched, Pradipta took the dance floor hostage.

“Although dressed in a formal kurti and trousers, as I danced I became the centre of attention. It happened spontaneously. The other guests gathered around. The women clapped and giggled when I transformed into a chhamiya and one of their husbands danced as if he was my rasiya (lover).”

Over lunch he asked Kashyap for a chance to dance in his film. The filmmaker agreed, on the condition that Pradipta lose 10 kg and get in shape.

“I was jubilant. Once back in Mumbai, I began to exercise and diet.”

Through the next year, Pradipta worked as art director on the recently released indie film, Love, Wrinkle-Free.

Finally the day came. On 26 February 2011, Pradipta found himself on a set created out of a small factory-cum-godown in Benaras. “I’d choreographed and practised the dance moves to Electric Piya in Mumbai. I’d been fitted by a costume assistant for a ghaghra choli, but I got another one stitched, just in case. I was nervous. I knew I had to match up to the dance moves and energy levels of much younger men.”

“The director said to me, ‘It’s your song. Just relax’. Still, it was challenging. Unlike dance numbers in formula films where each step is shot separately, Electric Piya was shot in one go. We did take after take, performing the entire song each time. The other actors and I improvised and improved our chemistry each time.”

The experience gave Pradipta a glimpse into the dark side of live entertainment. “I know launda dancers from Kolkata and have heard what happens at private performances. The dancer is poked with pins, burnt with cigarettes, even raped. While I danced, I was aware that if my co-actors got rough—they weren’t drunk—I could call out for help. But launda dancers in real life have no such safeguards.”

Watch Electric Piya, and the going seems rather rough for Pradipta too.

“While Anurag’s portrayal of the launda dance is not graphic, it is honest and close to reality,” Pradipta says. “In the first take, I didn’t know that the other actors would grab me. It surprised me, and so my dancing is not as bold as I’d planned. Which was absolutely the director’s intent, I realised.”

“All in all, it was a rocking experience,” he murmurs. His eyes rest on Main Chup Rahungi, the canvas of heroines propped against the wall behind my head. The room is still, save for the sounds of traffic returning home, as I scribble his words down.