The Clans of Bollywood: The Circles 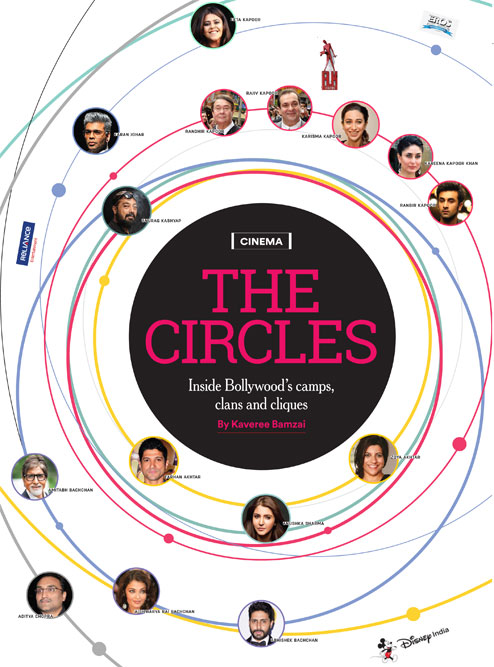 HE SHOULD HAVE been the last person Karan Johar wanted to work with. As a senior at Breach Candy’s Green Lawns School, he had bullied Johar for being a nerd. But when they met backstage at an awards function, Johar invited Nikkhil Advani to collaborate on his directorial debut, Kuch Kuch Hota Hai (1998). Advani had just worked as an assistant to Sudhir Mishra on Is Raat Ki Subah Nahin (1996), and Johar had completed work on Dilwale Dulhania Le Jayenge (1995) in many capacities—actor, assistant director, Kajol’s hair brusher. Advani would go on to work with Johar on his directorial debut Kuch Kuch Hota Hai as well as Kabhi Khushi Kabhie Gham (2001). The third in the Shah Rukh trilogy, Kal Ho Naa Ho (2003), was his big break. Written by Johar, it was directed by Advani. Advani recalls this and asks: “Was I an insider or was I an outsider?”

Indeed, he was an outsider who briefly was an insider before going right back to being an outsider again. “Karan and I were young, he thought I had said something, I thought he had said something. Before we knew, some years passed and we stopped working together.” But both continued doing well, even after parting ways. Johar went on to make his production house a powerful force in the industry and directed many more films. Advani took a little longer to establish himself, directing a series of movies before starting his own production house, Emmay Entertainment. His first movie as a producer-director was the highly regarded D-Day (2011) and since then he has established his credentials as a maker of smart, sharp, newsy movies such as Airlift (2016) and Batla House (2019). He currently has nine productions in various stages across movies and web series. His one mantra: pay it forward. “My first responsibility is to my writers and assistant directors. I want to make sure they get a chance to direct films, just as I did.”

The outsider has become an insider again, with his own ecosystem. But he still hasn’t forgotten the days of struggle when he, Anurag Kashyap and Manoj Bajpayee would hang out at Sudhir Mishra’s home, because they knew they’d get fed, “with one sabzi, dal and roti”. Advani’s career captures the essence of the Mumbai film industry, which has come under intense scrutiny now with the death by suicide of actor Sushant Singh Rajput. A rising star who had come from Patna via Delhi College of Engineering to make it in Mumbai, the popular narrative is trying to paint him as the eternal outsider who could never break the glass wall that separates the haves from the have-nots. A clutch of actors and directors, from Kangana Ranaut to Abhinav Kashyap, have targeted the ‘camps’ and ‘cliques’ for being impermeable and impenetrable, giving access only to those from the same gene pool.

Despite being given the status of an industry in 1998 by then Minister for Information and Broadcasting, the late Sushma Swaraj, Bollywood norms and conventions are different from other film cities of comparable size—not just Hollywood, but also Hyderabad or Chennai. Mark Lorenzen, who has done detailed research in this field, says social networks—personal ties between people that allow them to share information, trust each other and collaborate—are a means used in all film cities to assemble teams for film projects. But for historical reasons, social networks, and in particular family ties, are much more used in Bollywood than in comparative film cities (where agents, lawyers, film schools and other institutions play greater roles in connecting people).

Nikhil Dwivedi came to Mumbai to become an actor after giving up a well-paid job at American Express Bank and is now a successful producer (he made Veere Di Wedding in 2018 and Dabangg 3 in 2019). He says, “For newcomers these big names are legends. For those within the industry these uncles and aunties came to your birthday parties. This is not to deny the struggle of star children, but just that it is of a different nature.”

Bollywood was family-based right from the start, notes Lorenzen, a professor at Copenhagen Business School, more so than the other film cities in India. After the Second World War, the larger film studios in Bombay went bankrupt almost at the same time as there was an influx of filmmakers to the city from the north—resulting in a surge of small, flexible family-based film production companies such as RK Films (by Prithviraj Kapoor’s son Raj), BR Films (brothers BR Chopra and Yash Chopra, who then formed his own production house YashRaj Films) and Navketan (founded by Dev Anand).

These successfully targeted the emerging home market (coining the masala filmmaking formula in the process) and due to their success, they came to dominate the film industry in Mumbai for half a century. Even if Hindi films look different today and also target export audiences, the family-based industry structure of Bollywood is still influential—the industry has fewer large studios/conglomerates compared to Hollywood, which is now run by five major studios: Walt Disney, Paramount Pictures, Columbia Pictures, Universal Pictures and Warner Bros, which have complex relationships with independent producers and distributors.

For producers and directors in Mumbai, social networks/family ties are a useful means for assembling a project team. Filmmakers who are members of the Bollywood film families and dynasties (very broadly defined, and not just the Chopras, Kapoors and Bachchans) are on average more prolific and successful than other filmmakers. But in his research, Lorenzen found that if you are not a top-tier family, collaborating with your own family on a film does not pay off at the box office—quite the opposite, they found a small negative effect.

Some may find it difficult or impossible to break into project teams and networks. It is a classic Catch-22 situation: Those who are already in a network keep getting more network ties, those who are outside the network struggle to break in. And if a social network is (partly) based on family ties, it gets even more exclusive and difficult to break into. The more exclusive and closed, the more the network will resemble closed ‘clubs’ or ‘cliques’.

But there is mobility over time. Anurag Kashyap may have been a struggler who began in the industry as a writer for Ram Gopal Varma—at one time, he was seen as the saviour for all newbies with a queue outside what he described as his ‘factory’—but over two decades he has become an independent school of filmmaking, having given a break directly or indirectly to an array of stars from Vicky Kaushal to Nawazuddin Siddiqui. It’s the same with filmmakers such as Anubhav Sinha, Vishal Bharadwaj, Hansal Mehta and Anand L Rai. There is an informal camaraderie between all of them that extends from reading scripts for each other to watching first cuts.

Also, even when it comes to film families there is a hierarchy. All Kapoors are not equal: for instance, When Anil Kapoor began as an actor, he was seen as an outsider, even though his father Surinder Kapoor had graduated from being Geeta Bali’s secretary to a minor film producer. Ditto for Ajay Devgn, who began as fight master Veeru Devgun’s son, or Vicky Kaushal now, who is action director Sham Kaushal’s son. But over time, with the right alliances and pure persistence, new dynasties can be built and with them production houses. Farhan Akhtar had to go from actor to actor with the script of Dil Chahta Hai (2001) in his haversack before Aamir Khan agreed, that too for the role Akshaye Khanna had been slated for. Ditto for his sister Zoya who had to wait for seven years for an actor to play the lead in her first film, Luck By Chance (2009) before finally settling for her brother. They were Javed Akhtar’s children but were anything but overnight successes. Both siblings now run their independent production houses—Excel Entertainment and Tiger Baby Films—making movies and longform series.

What does a producer bring to the table? Their Rolodex. And some Rolodexes have been built since childhood: Take Aditya Chopra (Yash Raj Films), Dharma Productions (Karan Johar), Balaji Telefilms (Ekta Kapoor, who is unusual in the number of outsiders she has transformed into stars), Excel Entertainment (Farhan Akhtar and Ritesh Sidhwani) or Nadiadwala Grandson Entertainment (Sajid Nadiadwala). Bollywood does have professional studios, such as Reliance Entertainment, Eros, Disney, Sony and Viacom, but they depend largely on the established family firms for the stars. Stars such as Salman Khan have turned producers themselves now, but only a few make entertainment that is not centred around them or their extended family. Clean Slate, started by Anushka Sharma and her brother Karnesh Ssharma, is an exception. “We wanted to make the kind of films we wanted to see,” says the former cricketer and merchant navy sailor. Together the siblings have made some eclectic and brilliant choices, the most recent being the Amazon Prime series Paatal Lok and the Netflix allegorical film Bulbbul by Anvita Dutt.

EVERY NEWCOMER HAS to have a coping mechanism, a very thick skin, and an ecosystem that nourishes them. But often even if they play by the rules of the game, they lose. They may get invited to the right parties but may have to listen to snide remarks. Dwivedi recalls that it happened to him after his fifth successive flop as an actor when he was mocked by a senior, more successful actor at a party. He decided to cut his losses and turn producer. But not everyone has that mental strength. Says director Hansal Mehta, who has worked closely with actors Manoj Bajpayee and Rajkumar Rao: “There is so much pressure on the actors to look their best all the time whether it is exiting the gym or the airport. Based on that and the number of followers, the manager decides the brands they sport. The aspirations are anything but artistic. Managers tell you which parties to attend, what to wear, even whom to date.” Dwivedi adds, “Even something as simple as your hairstyle. I figured it out thanks to professional help much after I stopped acting.”

So, is it about outsiders and insiders or merely success and lack of it? Producer-director Vivek Agnihotri doesn’t buy the nepotism debate. “It’s your money, your child,” he says. What upsets him is when there is a deliberate decision to destroy a career. “I’ve had critics ridiculing me, but you have to be mentally and emotionally tough to handle it.” His way of negotiating is to keep his office door open for young talent. “At any given time, you will find young assistant directors, writers and technicians. Cinema cannot survive without innovation and R&D.”

As Mehta puts it, there are a lot of vultures out there, you need to learn to be a tiger. The Friday first-day-first-show doesn’t spare anyone.