Can a movie portray adultery if its plot and ideas are too infantile to be called ‘adult’? 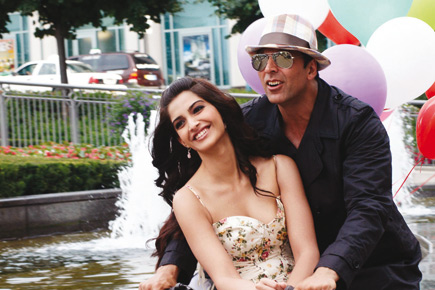 Can a movie portray adultery if its plot and ideas are too infantile to be called ‘adult’?


What is it about Caucasian women in bikinis fawning over South Asian men in badly tailored suits that gets our libido going? Thank You is stuffed with girls in their itsy bitsies singing hosannas to Hindi movie stars. Apparently, this is designed to enhance production values. Often, the girls are arranged across the sets like furniture. In one extraordinary scene they are on a ship, lying on a row of deck chairs and sunbathing, while Akshay Kumar athletically leaps over them, like in a 110 m hurdles race.

Clearly, White women are flaunted as post-colonial trophies for the consumerist Asian male. The leading men in the film lounge around with the girls, but they don’t exchange a word with them. This is the thing about Thank You. It’s a film about philandering Indian husbands, but Messrs Raj (Bobby Deol), Yogi (Suniel Shetty) and Vikram (Irrfan Khan) are too inhibited and overawed to look the part.

These guys are all talk and no action. Through the film, they bitch about their wives and ogle other women, but we never see them consummate their infidelity. Their extramarital affairs are ‘Wish Fulfillment Theory’ (Freud).

The closest we get to adultery is when Raj is about to kiss a woman and his wife sees him. The woman shuts her eyes, puckers her lips and repeats plaintively: “Kiss, na.” It is explained to the wife that the woman is actually asking for, ‘Kisna’. This infantile conversation suits the film’s immature ideas on relationships, marriage, infidelity and friendship. How can you have adultery when you don’t have adults?