The female lead in Tamil cinema is finally moving beyond stereotypes 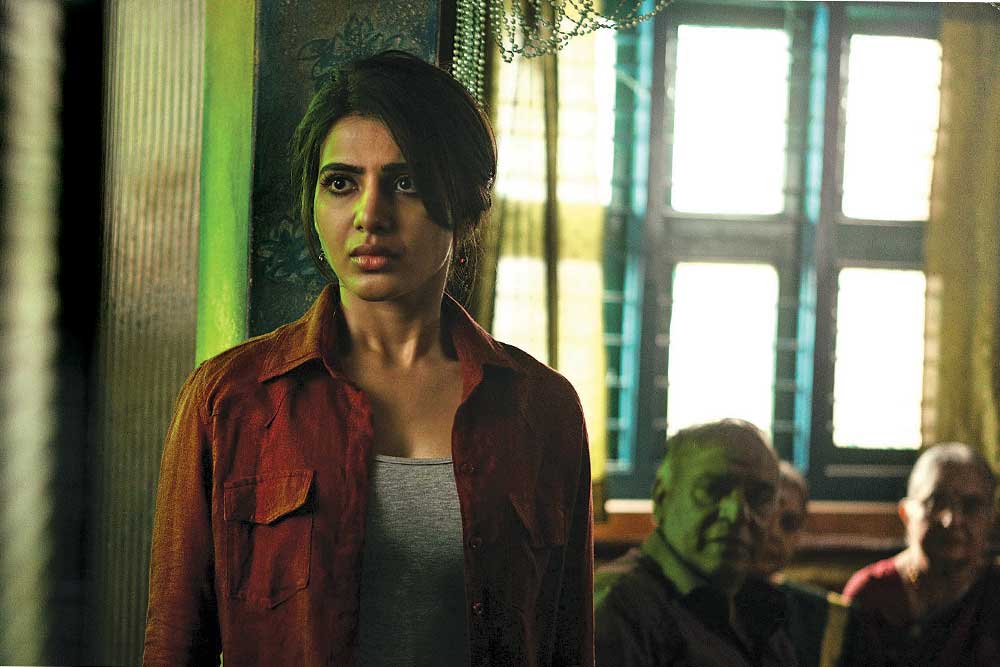 TWO FORMER classmates, friends and ‘lovers’ meet at a school reunion. They are at different places in their lives—emotionally and physically. Yet, their lives intertwine in a single conversation, spanning a night, without falling into a verbose trap. And then something erupts, a bemused Trisha asks, ‘Are you still a virgin?’ A visibly nervous Vijay Sethupathi responds in the affirmative but quickly changes subjects. The film is ’96 (2018) and it was a moment in Tamil cinema which marked a change. A woman had enquired about a man’s sex life, and worse, betrayed hints of her own desire.

And though it received warm, heartfelt reactions, the film wasn’t short of the trappings of commercial Tamil cinema. Incidents of stalking and voyeurism were normalised and spoken of with choking endearment and the world you felt Kollywood had left behind still loomed in the backdrop.

If the last year is anything to go by, it has been one of diverse on-screen women in Tamil cinema. Easwari Rao made history by being the first older woman to be paired with Rajinikanth in Kaala (2018). Shraddha Srinath held her own in a film with two popular male stars, Madhavan and Vijay Sethupathi, in Vikram Vedha (2017). She played a criminal lawyer who wouldn’t back down even on a case that would lead her to face her police officer husband in court. Nayanthara, easily Tamil cinema’s biggest female star, delivered powerful performances in Imaikkaa Nodigal (2018) where she leads a Central Bureau of Investigation probe on a serial killer and Kolamavu Kokila (2018) where she turns the tables on a drug mafia that she gets embroiled with.

It is clear that the Tamil female lead is coming of age and making her presence felt beyond being a consort to the male star. She is expressive and has her own dreams and desires and a share in the script, which is not just a plot device prone to vengeful fridging. And this isn’t limited to ‘women-oriented’ films the industry throws up as an occasional surprise.

IN ANOTHER SCENARIO, five women with different lives and ambitions live in the same apartment complex. They strike up an unlikely friendship through conversations during evenings loaded with alcohol, cigarettes and drugs. They open up about their struggles one by one with a little prodding from the lead, Oviya (of Big Boss fame). Discussions on their sex lives receive ample play too. Oviya here is the quintessential ‘modern woman’ who isn’t afraid to speak her mind, wears the clothes she wants and evades commitment in a romantic relationship. While this might initially be seen as a take on the notoriously frivolous Veere di Wedding (2018), 90 ml (2019) takes a more serious turn in the second half. The women turn vengeful and are determined to ‘set things right’ in each other’s lives.

The film faced criticism for ‘glorifying smoking and drinking’ and a complaint was filed by the Women’s Wing of the Indian National League Party for being a ‘disgrace to Tamil culture’ and ‘instigating rape’.

The reactions are hardly surprising given the place of women on and off screen in Tamil cinema. It was not too long ago that singer Chinmayi Sripaada was penalised for voicing a sexual harassment complaint against noted lyricist Vairamuthu as part of the MeToo movement. And more recently, actor/ politician Radha Ravi took the stage at a trailer launch of Nayanthara’s own film to make misogynistic remarks against her. Radha Ravi has himself been accused of sexual misconduct.

The Tamil film industry, save for a few like directors Pa Ranjith (of Kabali and Kaala fame) and Vetri Maaran (of Visaranai and Vada Chennai fame), has largely chosen to stay tight-lipped about the numerous accusations. This is an industry clearly ridden with gender imbalances.

But looking back, Tamil cinema in itself isn’t alien to strong women characters. In the 1970s-80s the iconic director K Balachander created unforgettable films like Apoorva Raagangal (1975), Sindhu Bhairavi (1985) and Moondru Mudichu (1976).

Apoorva Raagangal told the story of Carnatic singer Bhairavi, played by Srividya, who struggles to reconcile with a past relationship while in a marriage with an older man. Sindhu Bhairavi, on the other hand, broke social barriers by choosing to humanise the ‘other woman’ in an illicit affair. These and many more films by the legend took a nuanced look at women on screen and were ahead of their time.

The 1986 release, Mani Ratnam’s sleeper hit Mouna Ragam starring Revathy, was another film hailed for its portrayal of a woman comfortable in her own skin and who makes no qualms about her disapproval for a man she was forced to marry. The 1994 comedy Magalir Mattum saw three women take matters into their own hands when a boss sexually harasses them.

These are a few highlights that the history of Tamil cinema is peppered with. However, most commercial cinema has put women on the margins, emerging only to light up the screen or as plot devices.

Vetri Maaran’s 2018 release Vada Chennai was an important film and not just for being his first outing with a superstar, Dhanush. Set in the cinematic background of Kasimedu, a fishing village in north Madras, the film told the story of Chandra (Andrea Jeremiah), the kingpin in a long-standing gang war. Recounted from Anbu’s (Dhanush) point of view, Chandra is no damsel in distress, nor is she the firebrand woman afraid to shed a tear. Her vulnerabilities are as much a part of her character as her resilience. As the story progresses, Chandra slowly carves a space for herself in a patriarchal setup. She is intelligent, calculative and, most of all, multi- dimensional. This itself is a rarity and more so when sharing screen space with a male superstar.

Vetri Maaran’s earlier films have had no significant women and in one case, Visaranai, practically no women at all. He has admitted that the character came before the film and it was Chandra who defined Vada Chennai.

As film after film hits screens, it is evident that complex, well-developed female leads are slowly becoming indispensable. They are no longer put into narrow boxes like those of the demure virtuous heroine and the vicious villain.

GANGS OF MADRAS (2019), which hit screens two weeks ago, promises to be a crime thriller with Priyanka Ruth in the lead. CV Kumar’s second film after the ambitious science fiction project Maayavan (2017), Gangs of Madras had all the elements of the genre—stylised fight sequences, rustic backdrops and a fitting background score. Additionally, it was ‘heroine- oriented’ which gave it both the novelty and the freedom to straddle the realistic with the heroic. Out to avenge the death of her husband in Kill Bill-esque fashion, Razia (Priyanka) trains to fight, locates the culprits and displays cold-blooded moments usually reserved for men, especially male villains. She is brave and fierce, on the one hand, and vulnerable and afraid, on the other.

Yet, the male gaze in Gangs of Madras is unmissable. It is created for fetishised viewing and never seizes to remind you repetitively that the ‘hero’ is in fact a woman. During a phone conversation with a police officer, Razia falls into a common trap hurtling abuses including one that loosely translates to ‘do the right thing or go back and wear a saree’.

Both, ’96 and 90 ml (despite having a woman at the helm) fall prey to such misrepresentations and are a far cry from passing the Bechdel test. Yet, in an industry still male-dominated, one is glad for their existence.

Then comes a film like Thiagarajan Kumararaja’s Super Deluxe (2019), which refuses to give in to tropes and could be a handbook on effective women characters. Ironically, the three women and one transgender own the narrative despite limited screen time and lines. They are stoic observers and convey more in silence than they would with ceremonial outbursts. Those are reserved for the men.

In the first of three parallel stories, Vaembu (Samantha Ruth Prabhu) is caught cheating on her husband with a former lover who dies after a sexual act. Her husband Mugilan (Fahadh Faasil) is livid but agrees to help her dispose the body. She is apologetic but won’t let the guilt define her actions veering as far as offering to step out of the car while Mugilan vents his anger. In another situation, when being asked for a sexual favour by a cop, she won’t let him use the morality card despite being vulnerable and visibly frightened.

In a film that is as layered and complex as it is poignant, the women are real, flawed and unapologetic. They exist on their own, display their own quirks and talk about everything including their sexuality with ease. While at it, they hold up a mirror to the toxic masculinity that surrounds them without ever sermonising.

While strong, well-written female leads are slowly becoming the new norm in Tamil cinema, it isn’t a pervasive trend yet. The typical box-office magnates, superstar-bearing films continue to use a woman or two for a touch of glamour alone. The case of the unexplained disappearance of Simran in Petta (2019) and Nithya Menen as a fridging bait in Mersal (2017) come to mind.

Despite this one can affirm that a new-age female heroine has come to Tamil cinema, and, hopefully, she is here to stay.