Neeta Shah is one of many aspirants to cine stardom. In her book, she gives us an insight into the horrific and wonderful world of the film industry 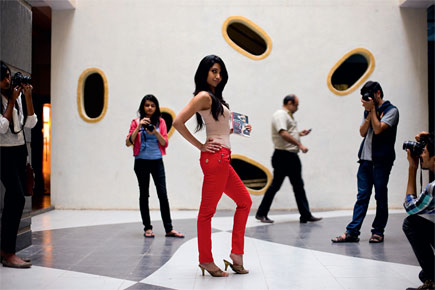 Neeta Shah is one of many aspirants to cine stardom. In her book, she gives us an insight into the horrific and wonderful world of the film industry


Neeta Shah was 15 when she decided that she would one day leap into the dark tunnel that led to her Wonderland—Bollywood. However, the practical ambitions of her half Parsi, half Gujarati family ensured that she studied instead to become a certified chartered accountant. Dreams are persistent, though, and a day finally came when this girl from Mumbai’s posh Breach Candy realised that she wasn’t “happy”, and would no longer be able to push aside her Bollywood ambitions. “My mum relented since she knew this would keep happening. I would pop up with this dream every now and then. How long could she stop me?” says the sharp-featured Neeta as she bites delicately into an egg-white omelette at a café in Bandra.

Though ambitious, she was realistic enough to drop her acting dreams (though she continues her Bollywood run in a production firm); she is still conscious of how she looks (she never eats rice or roti), but is not vain enough to resort to needle work on her body; and importantly, in the current context, she is articulate. This helped ensure the publication of her book, Bollywood Striptease, this February by Rupa & Co, which claims to have already sold several thousand copies.

As the title suggests, this is Bollywood laid bare, through the perils, adventures and excitement of a struggling actress. While her own experiences are scattered liberally throughout the book, it tells the story of every person who wants to work in this industry. “It’s fiction, but 80 per cent of it is real. I did a lot of research. I met actors, writers, musicians, casting directors—everyone. I listened to so many stories. At one time, you could find me sitting at Andheri’s coffee shops just taking in the people around me—all struggling to make it,” says Neeta.

The very stage Neeta found herself at a few years back. Looking for ways to launch herself in the industry, she did some modelling, and got a role in an MTV show. Later, while researching the book, she met a model coordinator, and pretended to be a struggling actress. He told her that if she hired him, he would set her career rolling. Neeta soon caught on to his lies: he didn’t have any contacts in the industry and was only out to fleece her. The main problem, Neeta realises now, is that everyone is out to cheat Bollywood aspirants. “It’s not just about the sex anymore,” she says.

It is about being at the right place at the right time, she insists. “How do you meet the right person? You can’t just walk into Yash Raj and ask to meet Aditya Chopra, right? So it’s all about making connections, and the right connections. How do you differentiate? It’s tough. I really feel there should be a book of do’s and don’ts for strugglers.”

Her book is much like the handbook she speaks of. The protagonist Nikki Shah falls in love with the wrong guy, gets rejected at auditions, goes for fake auditions, sees her friends grappling with drug issues, meets the wrong kind of people, meets a few right kind of people and figures out who her real friends are. “I know people think the casting couch is the biggest problem, but it’s just one of them. Many aspirants get conned and end up spending lots of money on fake casting agents.” But we can’t resist—the casting couch is a big, bad reality, right? Neeta laughs, “Yes, it is. And it’s strange, but boys are more susceptible to it than girls. Let me tell you a funny story. A friend, from a rich family, wanted to become a scriptwriter. A female producer said what they all do, ‘sex equals film’. He agreed and went over to her home, where, horrors, she had arranged for him to sleep with her gay brother. And he agreed to that as well, and you know what? that movie didn’t even get made.”

Another female model she met while writing the book used to sleep around to get a few roles, but now just sleeps with people for money. “She got disillusioned. Her heart isn’t in it anymore. The acting dream just vanished,” says Neeta. She then gives a wry smile, “You won’t believe this, but many strugglers sleep with powerful film journalists too. They can make or break you.”

Despite the horror stories, Neeta and her book are all about that happy ending Hindi movies love. “There are many good people in Bollywood. You’ve just got to keep your mind open. Also, don’t put all your eggs in one basket and rely only on acting. A true Bollywood lover can work on any aspect,” she says with the optimism of a Bollywood survivor.

Neeta’s dream run began two years ago, when, encouraged by a friend, she started writing her book, got a job at iRock Media as vice-president, business development, and last year got a book deal. She is now co-writing a movie based on the book, which has been picked up by iRock Media, the makers of Ragini MMS.

“I look after the business side of films there. And though I am not acting right now, I can’t even imagine not being connected with Bollywood. You never know what I might do later in life. Look at Farah Khan, choreographer, director and now actor. Anything is possible here,” she says.

The real high is the feedback she gets from her readers, says Neeta. “I get mails on Facebook every day. One struggler wrote to say that he’d been ready to leave Mumbai, but read my book a night before his flight. This is the message he got: live life to the fullest, fulfill your dreams. He stayed back and is now a lead in a top TV show. That’s the true reward, right?”