You thought one Spock was enough. Well, this film has two. Deal with it 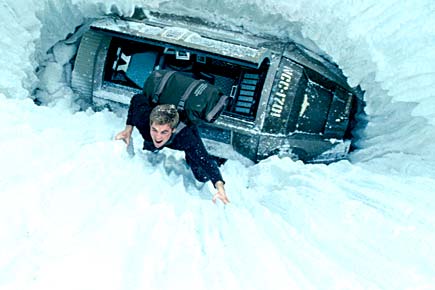 You thought one Spock was enough. Well, this film has two. Deal with it


You thought one Spock was enough. Well, this film has two. Deal with it

The eleventh Star Trek is a refreshing refresher course on this popular intergalactic franchise. It is aimed at young movie-goers who made their general appearance in this galaxy during the 1990s. They have yet to be drawn into the necessary time-space continuum to appreciate personalities in our cosmos as diverse as Spock, Kirk and Scotty.

Directed by JJ Abrams, Star Trek engages us on the fascinating question of altering the chain of events that make up our lives. The young James T Kirk (Chris Pine) decides that Spock, who is in charge of the USS Enterprise, is taking his job too seriously. Spock is of mixed birth, half -Vulcan and half-human, and Kirk feels that his Vulcan side has robbed him of his intuition. He is making mistakes, including throwing him (Kirk) off the ship and onto a Godforsaken planet where dinosaur-like creatures are ready to eat him.

Fortunately, on this prehistoric planet, Kirk meets ‘the future Spock’, the man Spock becomes as he ages (played by good old Leonard Nimoy from the previous incarnations of Star Trek). The old boy tells him to go back to the Enterprise and alter the destiny of the young Spock, thereby breaking the chain of events that make up Spock’s life and, by association, Kirk’s own. So Kirk goes back, gets into a fistfight with the young Spock (Zachary Quinto) and convinces him that he is incompetent to captain USS Enterprise. He then takes command of the ship himself and makes all the right decisions. Hey presto, the ‘future’ has been altered.

Star Trek is certainly worth a movie ticket. The reality in the film is alternate, but the narrative never flags, the characters are superbly etched and the visual effects, particularly a sequence of USS Enterprise under construction on the never-ending plains of Iowa, are awesome. They remind you of the visual design of the alien spaceship in Spielberg’s Close Encounters of the Third Kind.