Shor in the City

Here is a reprieve from the Golmaal school of comedy. It lets you chuckle along 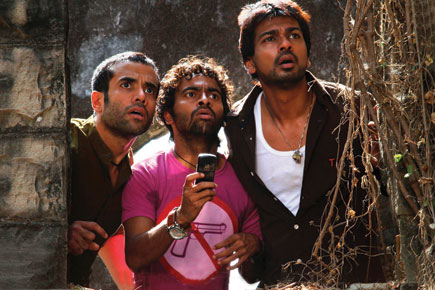 Here is a reprieve from the Golmaal school of comedy. It lets you chuckle along


Like dark chocolate, black comedy is an acquired flavour and tastes bitter if it doesn’t suit your palate. A movie about hustlers in Mumbai, Shor in the City gives you humour without laugh cues. Lines are delivered with deadpan expressions, and the comedy lies in their contextual absurdity.

An example. Tilak (Tusshar) pirates bestselling books. When he tells his printer that two pages of Paul Coelho’s The Alchemist are missing, the man shrugs and says nobody would miss them. He is a good literary critic, but a bad printer. When pressed by Tilak on maintaining integrity in the business, he suggests stapling the pages on.

Tilak is recently married and hopes to make his millions selling these books at traffic signals, after which, he says, he will abandon his two wheeler and drive around in a big car, maybe a Nano. His buddies are equally enterprising. In a bag they have stolen, they find some serious armour. It comes in handy on many occasions; threatening a man sitting on a toilet, providing ‘security’ to an Indian American businessman, robbing a bank to help a cricketer, and other sundry pursuits.

To some extent, the Indian American strand of the comedy, clearly intended for an audience looking at Mumbai from abroad, robs it of some conviction. Abhay (Sendhil), an NRI looking to set up shop in a back alley of Mumbai, is intended as funny, what with his hopeless negotiating skills in an American accent. In fact, this thread is black without being comic, and is the only weak link in the ensemble film.

The relief in watching Shor in the City is partly in the reprieve from the Golmaal variety of comedy. You don’t have to guffaw like a retard. You can chuckle quietly.

Of all the funny men, Pitobash stands out. He plays Mandook, the most unpredictable and deranged Mumbaikar in this unhinged town. 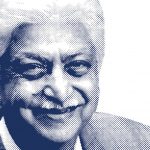