A fact without any sexist intent


Having reported for years on the manufactured agelessness of male superstars, it is a joy to see the tables being turned. Meezaan Jafri, who plays a young man suspected of having an affair with Shilpa Shetty in Priyadarshan’s forthcoming movie, Hungama 2, was five years old when Shilpa Shetty first danced to ‘Chura ke dil mera’ in Main Khiladi Tu Anari in 1994. Shetty, 46, is reprising the song, famously choreographed by the late Saroj Khan, and possibly looks better than she did back then. I remember once asking a co-star for a comment on Shetty after she won Celebrity Big Brother UK in 2007. He didn’t hesitate for a minute before saying she has the best body in town. It was stated as a fact, without any sexist intent. Indeed, Shetty is remarkably well turned out. Shetty’s husband in Hungama 2 is played by Paresh Rawal who has acted as her father in the past, which is a tribute to his ability to reinvent.

Anyone who wants to produce historical epics in India has to have a big heart and deep pockets. It seems Madhu Mantena, serial entrepreneur and former co-producer, Phantom Films, is the man for the job. Mantena is planning a mythological universe along the lines of Marvel or DC Comics, and intends to produce both Ramayana and Mahabharata. Ramayana, to be directed by Nitesh Tiwari and Ravi Udyawar, is to have a budget estimated at Rs 600 crore, and pre-production on it has begun. The screenplay is being written by Shridhar Raghavan and the live action trilogy will be co-produced by Telugu stalwart Allu Aravind and Prime Focus founder Namit Malhotra. The cast will have actors from across industries, which suits Mantena who has deep roots in both Mumbai and Hyderabad. Mahabharata will be told from Draupadi’s point of view, a project on which Mantena is collaborating with Deepika Padukone.

The World Is Her Oyster

Even as she waits to complete the Chandraprakash Dwivedi film with her as Sanyogita, the love of Prithiviraj Chauhan’s life, former Miss World Manushi Chhillar has already completed the shoot of a romantic comedy with Vicky Kaushal. The film, tentatively titled The Great Indian Family, is being directed by Vijay Krishna Acharya. Akshay Kumar plays Prithviraj in what is being touted as an epic. Chhillar has one more film due in a coveted three-film deal with Yash Raj Films. She has also been signed as the face of a global fitness brand, has multiple endorsement announcements on the cards, and thanks to her pageant experience, an association with UNICEF as well as her very own Project Shakti that aims to bring awareness on menstrual hygiene among women in India.

Being featured at the top of the cast is no longer a novelty for female actors in Hindi cinema but it’s good to see it becoming the norm. Yami Gautam, who recently got married to her Uri: The Surgical Strike (2019) director Aditya Dhar, leads the cast of Aniruddha Roy Chowdhury’s investigative thriller Lost, to be shot in Kolkata and Purulia. Chowdhury, who directed Pink (2016), can be expected to give Yami’s character heft. Supporting her will be the great Pankaj Kapur. Yami has been busy lately, having completed Bhoot Police, produced by Ramesh S Taurani and Akshai Puri, and A Thursday, by RSVP Movies and Blue Monkey Films.

Nothing that Saif Ali Khan does seems to please the particularly virulent trolls on Twitter. If he releases the poster of his forthcoming movie, Bhoot Police, they comment on the Hindu iconography in the background. If he announces the name of his firstborn, they troll him for it. If he doesn’t announce the name of his second-born, they attack him. They attack him for his second marriage, which for them constitutes love jihad. They attack him for the actions of his children from his first wife, for what are clearly their actions. One can only congratulate him for maintaining his cool and hope he continues to counter the toxicity by doing even better in his profession.

Ajith Kumar, whose Valimai poster launch created quite a stir recently, is a race car driver who has participated in Formula 2 events. Produced by Boney Kapoor, Valimai is his second partnership with Ajith after the Tamil remake of Pink, Nerkonda Paarvai (2019). 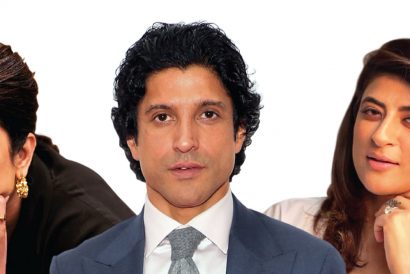