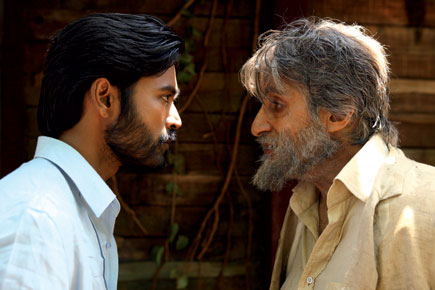 As a vehicle for Amitabh Bachchan’s celebrated flair for dialogue delivery, Shamitabh is adequate, but as entertainment it stretches our credulity. An unlikely tale, it is about how Finland has developed an astonishing technology that allows surgeons to implant a voice receiver and speaker in a voiceless person. This technology enables Danish (Dhanush), an aspiring actor who was born mute, to ‘speak’ in the resonant bass of Bachchan.

We begin by following the young man from Igatpuri who comes to Mumbai with dreams of being an actor. Then we meet Amitabh Sinha (Bachchan), an old drunk with a magnificient voice who came to the city years ago with stars in his eyes, failed to get the breaks he deserved, and who now lives in a graveyard, mournfully reciting lines from Mughal-e-Azam.

In the beginning, the partnership works well. Amitabh is given a copy of the script, which he reads out sitting in Danish’s vanity van. His rich baritone is then miraculously transmitted to Danish’s new persona, the movie star ‘Shamitabh’. Fame comes to Danish and a cheque to Amitabh.

But the boozehound soon turns cantankerous. He is fussy about his lines, critical about the scripts and increasingly resentful about his own anonymity in the deal. It is an engaging performance, reminding you of the grouchy old Bachchan of The Last Lear, the ill tempered Shakespearean theatre actor, contemptuous of modern cinema.

So it is a one-man show and there is nothing else in the movie worth watching. Director R Balki has got a decent film idea, but hasn’t developed it into an organic, living and breathing work. Weakest of all is the central character of Danish. He comes across as someone in a freak show, rather than a person who is struggling with a new technology to overcome the challenge of being born mute.

This is a disappointing film that lets you down very early in the telling.