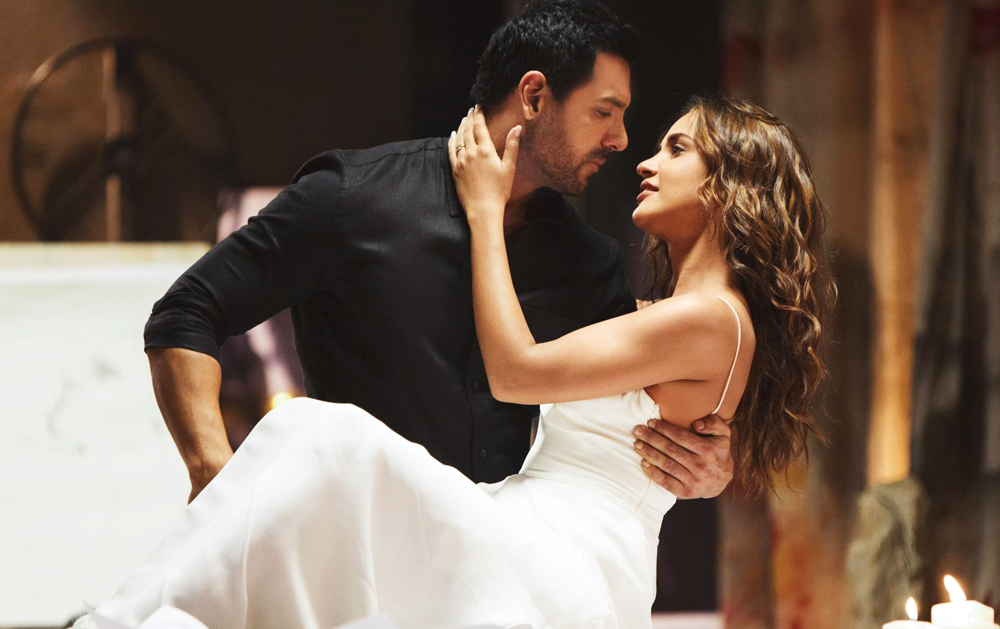 John Abraham’s muscle man projection is a commercial decision with a mixed pay-off. His idea is to make these violent one-man army ‘Rambo’ movies. These films would build up an image and a fan following that could work to his benefit in the other relatively nuanced roles he attempts in different genres. But both the number and the quality of the movies in which he is a human bulldozer are so prolific and so poor, that he is going to be stuck with an unenviable public perception. In his forties now, the question is: does he have the shelf life to sustain the tough guy roles for long, and will his considerable fan following amongst women who want to see him in different roles, be lost?

With ‘Satyameva Jayete’ Abraham has gone as low as he can to reach the nadir of the lowest common denominator of his fans. The film is a gory cauldron of corrupt police officers being burnt alive in both vigilante justice and personal vengeance. Vir (John Abraham) is a painter who lives in a rather nice apartment in Mumbai and dates a pretty girl called Shikha (Aisha Sharma), an altruistic young lady who helps clean up the beach and look after abandoned puppies. But in his after hours, Vir does some pretty serious stalking, hunting and murdering of bad police inspectors, picking them off from the streets, their own homes and, in one case, the police station torture cell itself.

The resultant media blitz on corrupt officers being knocked off by an anonymous killer gets the Police Department very embarrassed. It is a field day for trolls, and plenty of messages float around on how the killer is simply interested in social justice, with murder being a necessary corollary to the achievement of his goals. In desperation, Police HQ cuts short the vacation of ace detective, DCP Shivansh Rathod (Manoj Bajpayee), and gets him back at work for some vigilante hunting. Shivansh figures out that there is a cryptogram inserted into the messages sent to the police by the killer, and the encryption reflects the order in which future killings in Mumbai are going to take place.

Till this point in the narrative, relative sanity prevails in the film’s scenarios and you feel that the plot is gradually thickening, and a mystery might be in the offing. But shortly, post the intermission, the ‘Rambo’ persona is unleashed and all hell breaks loose. The writers and director abruptly give up any semblance to reason and emotion in the development of their plot. Blood is splattered everywhere and the John Abraham character goes berserk, breaking bones, tearing limbs and turning into a full blown maniac on the open streets of Mumbai.

Much later, we are told by the DCP that he figured out who the killer was when he visited an art gallery and found that the painter had depicted all the murdered officers in his work. This blood and canvas cinematic exhibition is not worth a watch.