Saif Ali Khan now plays an ageing playboy. He tells Divya Unny why it is the best time to be in showbiz 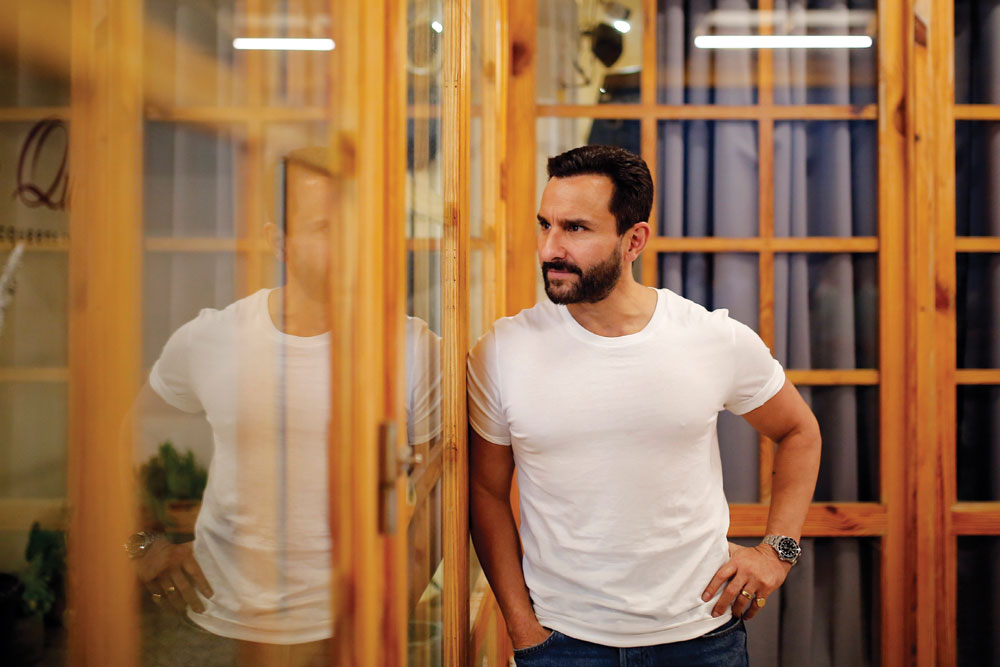 
SAIF ALI KHAN was never the archetype superstar he was touted to be. He didn’t deliver back-to-back hits, he didn’t say all the right things in interviews and he didn’t block dates in the calendar promising a film every year. He was likeable, but not the most bankable star at the box office. In his two-and-a-half-decade-long career, he has delivered around a dozen hits, and many of these films had an ensemble cast. However, what’s made him last despite all of this is that he was the most relatable of the generation of superstars he was pitted against, because he wasn’t afraid of being himself. It wasn’t an image, it wasn’t unapproachable, it wasn’t airbrushed—it was just Saif.

“Someone once called me the ‘king of flaws’. Now that’s got to count for something,” he says, taking a sip of coffee, after a long day of shooting. In August, he turns 50; having spent more than half his life in films, Saif is still going strong. He’s had a hit film in Tanhaji after seven years, (Go Goa Gone was in 2013). His latest release Jawaani Jaaneman has put him back on the map for what he does best: playing the overaged yet adorable lover boy, and he has the distinction of making it to the Emmy Awards, thanks to Sacred Games.
“There comes a point in life where you stop questioning your choices and you just go with the flow. It’s got something to do with rediscovering yourself, not just professionally but as an individual, which becomes the most challenging thing to do as you grow older. I feel like I’ve been able to do that now, because there’s so much more scope to not stick to the stereotype, to explore different story avenues, to break the boundaries of what qualifies as a blockbuster, to reach out to an audience sitting in a whole other part of the world through a Netflix. It’s probably the best time to be doing what I do, and I’m glad to have made it here,” he says.

At the theatres we can see him playing a Rajput soldier who fought for the Mughals against the Marathas, on the one hand, and as a 40-year-old party boy who discovers that he has a 21-year-old pregnant daughter, on the other. His versatility and his wit have been his strongest suits and having entered the industry in the 90s, he has succeeded in staying relevant.


“From the very beginning, I was more drawn to the more natural style of performance, and I think that’s more in fashion these days,” says Saif Ali Khan, actor

“The meaning of an antagonist has changed in today’s times. Indian films have always celebrated over-the-top, out-of-body kind of heroic characters, which I couldn’t be even if I wanted to be. From the very beginning, I was more drawn towards the more natural style of performance and I think that’s more in fashion these days. Ajay Devgn [who plays Tanhaji Malusare] deserves all the credit for the way Tanhaji has shaped up, but in Udaybhan Singh Rathod I saw complexities that I could play with. He isn’t black or white and you never really know what he’s thinking. I envy actors like Tom Hardy who can play the cool bad guy in a movie and I approached it like that,” he says.

In 2018, Saif returned to the limelight as Inspector Sartaj Singh in Sacred Games. He was vulnerable, controlled and often soaked in guilt and self-doubt. Through the show, Sartaj held his own even while other characters often blazed forth. It was last in Omkara (2006) that Saif had this kind of lasting effect on his audience. As Langda Tyagi, he crawled out of his comfort zone, into a space so dark and intimidating, that he became unrecognisable. With Sartaj, he moved a few steps further. Without catch phrases or songs he exposed his soul to the world. Through the first season of Sacred Games, one wished that Sartaj would find resolution, and that only happens when you become so invested in the character, that he starts to feel like one of your own.

“When my films were not doing well, I realised that instead of rehashing what I had already done so many times, I needed to break the pattern. Very consciously, I decided I would work with intelligent directors, who would allow me to shape my characters into a world that was beyond the script. Sartaj came to me at a time when I was getting back to the basics of acting. I used to watch these young actors in my own films like Chef [2017] or Kaalakaandi [2018] and I’d see something very new and refreshing in the way they performed. They were just being, they were effortless, there was nothing extra added for effect. I was learning so much from them. Then I went back to books, to technique, to form. I hadn’t learnt any of this when I started off because I wasn’t expected to, or it was working out for me even without knowing technique. But now, I couldn’t afford to be stuck in some stylised Bollywood type of acting. I had to go beyond that. I was learning to act for the first time in my life, through observation and through books, and quite honestly it was a self-preservation move for me,” he says.

Breaking an image requires courage, and Saif mustered that up. He would stay up at night and read books on acting. He applied what he was reading as what the acting teachers said in the books, resonated with him. “When do you get stuck? By falling into a rut by doing the same shot in the same way, every time. I learnt to question that and think, ‘How do I do this differently?’ You remember the bits and pieces you’ve learnt, you collate that and it’s almost like you’re building that world slowly. You can really get some magic out of it,” he adds.

In a show where Nawazuddin Siddiqui was in top form as Ganesh Gaitonde, Saif managed to stand out. While the makers of the show tried everything to defend the second season of Sacred Games, Saif was the only one to admit that the second season lacked the depth and vision the first. “It’s taken me a lot of time to accept failures in the same stride as success. It’s about recognising what works and what doesn’t and there’s no point trying to defend something that could have been better. So I have nowhere to run or nothing to hide. If something did not work out, it must be looked into so we can do better,” he says.

HIS HONESTY AND ability to laugh at himself draw people to him. He promises that unlike his craft, even today he doesn’t take himself that seriously. For the nawab who grew up in palaces, mostly as a single child, and was exposed to Western art and styles of cinema at a very young age, Saif believes that he was trained to think differently and view situations on a larger canvas from early on. “As a kid I spent a lot of time by myself, till my sisters came along much later. I was a bit of a reclusive kid. I used to enjoy my own company, and very early I started to rely on myself. I watched American war films, buddy films growing up and that was my idea of cinema. I took up cross-country bicycle riding, skiing, activities that would require a lot of self-belief and endurance. You never realise it, but it’s these things you imbibe in your formative years that you fall back on much later in life. I think both professionally and personally it has helped me immensely,” he says.

Saif believes that he can draw on his emotions as a husband and father to be a better actor. For him there’s nothing greater in his life than being the dad of three children. “I am more mature because I am a father. A man slows down after a certain age, and I am happy to be around my kids. The patience and that kind of resignation and surrender you have with children, you don’t find anywhere. In those moments, I am happy to even die. That leads to peace of mind. I have not one but three kids and I’ve experienced the joys and the pains of parenthood multiple times. It really gives you a peek into a new self. I get a chance to get onto the same frequency as Taimur, and that’s relief for me. It’s almost like getting back to the basics of being a human, turning into a child,” he adds.

Saif’s gift is that he can retain the innocence and the truth needed to be a good storyteller. We will always remember him as the lost Sameer from Dil Chahta Hai (2001), the manipulative Cyrus from Being Cyrus (2005), the romantic Shekhar from Parineeta (2005), the phobic Jai from Love Aaj Kal (2009), the scheming Tyagi from Omkara (2006) and the obnoxious Gautam from Cocktail (2012). In the near future, we will see him play a political mastermind (possibly similar to Kevin Spacey in House of Cards) in a TV thriller Tandav. It’s a gamble and Saif hopes it’ll pay off. “The average acting environment is not really conducive to genius. Sometimes if you’re lucky, a director can hold your hand and take you somewhere special. You have to be brave enough to try this on your own. The less you connect with industry norms the better. You don’t become part of the system. If you march to your own drum, nothing’s really impossible,” he says.