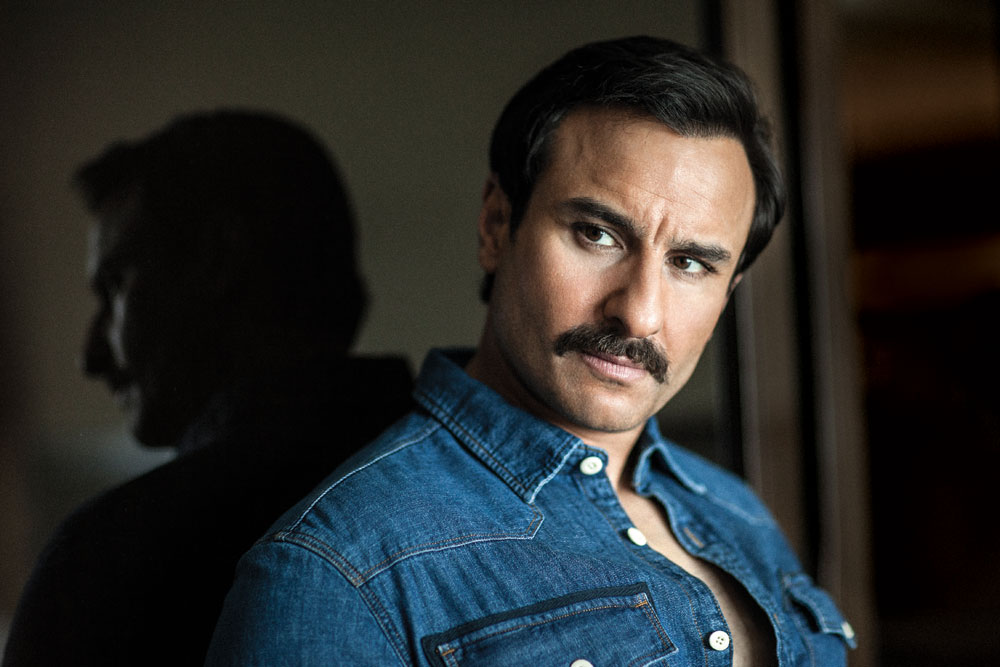 WHEN HE WAS younger, he remembers a superstar telling him all that he needed to do to be an actor was to “stand there and be sincere”. For the longest time, that advice worked for Saif Ali Khan, 51, as he sailed through the ’90s becoming one-half of a super couple with Akshay Kumar and then the 2000s where he was the embodiment of the urbane, cool, confused, commitment-phobic man-child in a series of popular romantic comedies. He could have gone on like that, retreating into a gilded cage of stardom. But then failure struck. There was a series of misfires—Happy Ending (2014), Humshakals (2014), and Phantom (2015).

“Things got a bit scary. I remember Kareena [Kapoor Khan, his wife] once saying to me—I think I was having a dinner party—that all eyes are on you and not in a good way. I really took that to heart. I did films like Vishal Bhardwaj’s Rangoon (2017) instead of another romantic comedy or a stardom-generating vehicle. I remember my name on the call sheet was after Kangana [Ranaut] and Shahid Kapoor and I didn’t mind,” he says now. He decided he wanted to learn more about acting and excel, irrespective of whether the film was a success or not.

The result? Audiences started accepting him all over again, critics appreciated him and filmmakers wanted to work with a committed actor. His portfolio transformed around this time. A variety of characters came his way. One of the earliest Hindi stars to venture into streaming, Saif played police officer Sartaj Singh for two seasons of Netflix’s Sacred Games (2018, 2019). He played a suave and power-hungry politician in Ali Abbas Zafar’s Tandav (2021) on Amazon Prime Video. He’s been Tanhaji Malusare’s adversary, Udaybhan Singh Rathod, one of Aurangzeb’s most ferocious generals in Tanhaji: The Unsung Warrior (2020). And now he is set to play Indian history’s biggest villain Ravana aka Lankesh in Om Raut’s Adipurush.


“I seriously suspect my religion is acting. How quickly can I disappear into the next role, that is the excitement now,” says Saif Ali Khan, actor

“The magic of acting is finally happening to me,” says Saif. “The script is a blueprint and the creation of the character is really up to you. That is why internationally people are so excited to be actors. I am just scratching at the surface of understanding it and getting dangerously addicted to putting on a costume and saying my lines,” he says, adding jokingly, “It might just ruin my life. I fear I won’t be able to live without it and I’ll miss it when I’m not doing it.” “Luckily,” he says, “It’s such a pain in the arse going to Film City that I enjoy holidays with family as well.”

It’s not been easy. Saif has been in the movie business for 31 years now and has been a celebrity from the moment he signed his first film, which he was promptly thrown out of. It was Bekhudi and it was meant to launch him and Kajol. It wasn’t to be and he found his feet well into the ’90s as this sort of cheeky, classy perma playboy. But then Dil Chahta Hai happened in 2001, allowing him to play a version of himself onscreen.

Cut to 2006, and his yellowing teeth, colourful language, and ugly limp as Langda Tyagi in Bhardwaj’s Omkara revealed a side of him the film industry hadn’t seen. Here was the darling of Yash Raj Films’ romcom, professional boy-man, and possible inheritor of the romantic hero mantle, choosing to be unwashed, unlovely and unloved. The film didn’t work commercially and perhaps Saif thought it best to go back to convention. Until a series of flops forced him to break out of the stardom trap. It required shedding his ego. In any case, he laughs, being the son of Mansoor Ali Khan Pataudi, and having studied at a British boarding school (Winchester College) ensured that he had his feet firmly on the ground. “I is an ailment,” he says. “My father always told me when you tell a story to a friend, keep it short, keep it entertaining and make sure it is not about yourself.”

That advice has taken him to some fascinating places recently, playing pure evil in Tanhaji, to being a ludicrous ghostbuster in the entertaining Bhoot Police (2021). It requires a particular skill to become totally immersed in a ridiculous part and play the comedic role, and Saif has it in spades. According to Homi Adajania, the director of Being Cyrus (2005)— which was one of Saif’s first forays into the darker side of life—he has a rare blend of intelligence, humour, and talent. “Some of the best times I have had on shoots have been with him for the sheer hilarity of the experience. There’s something detached and yet so in-the-moment about him and his unique sensibility has always resonated with me,” he adds.

It comes from a place of increasing confidence. Navdeep Singh, who directed him in the demanding Laal Kaptaan (2019) as a bounty hunter says Saif’s choices are the result of his being comfortable with who he is, and not being in the rat race any longer, “I don’t think he wanted to be an actor in the blur that was the ’90s. But post-Omkara he broke through as a performer, making the transition into age-appropriate roles.”

“The script is a blueprint and the creation of the character is up to you. I am scratching at the surface of understanding it and getting dangerously addicted to putting on a costume and saying my lines,” says Saif Ali Khan

As a star, one is all too susceptible to the demands of fame—keeping the same hairstyle, choosing the same kind of roles, remaining in a familiar work environment. There is also the demand that one turn producer, becoming a creator of jobs for many, rather than merely for oneself. Saif tried that with Dinesh Vijan in Illuminati Films but gave it up after a while, choosing the simplicity of an actor’s life. “Now my entire morality revolves around giving a shot. My diet, the hours I keep, the things I put into my body, it all revolves around it. I seriously suspect my religion is acting. How quickly can I disappear into the next role, that is the excitement now,” he says. And yet work is a means to an end, a chance to live one’s life without getting too attached to it. As Ayn Rand wrote about Howard Roark, he relaxed like a man who worked hard. “For me it is about coming home from a long day of work, ordering Chinese food, having a stiff 18-year-old Scotch,” he adds.

He is particularly excited about playing Lankesh. “As Lankesh I am acting in some scenes I’ve read as a child in comics and in books. It is fascinating on so many levels,” he says. Raut says every day on the sets has been a joy for him. “I love to come to work with Saif, we dream together. He’s an actor of such tremendous capacity.”

Then there is Vikram, the police officer, in the Hindi remake of Vikram Vedha, titled Fighter (2022) co-starring Hrithik Roshan. “Eventually, it’s about batting practice,” says Saif. The more you do, the better you get at it. Now he wants to play the role in the most entertaining way, rather than in the most heroic way, like his personal deity, Al Pacino. He finds celebrity to be an inconvenience now though, as it follows him around, whether it is his children or his star wife. “The only power is money,” he says, “I’d much rather be influential than famous. The only thing that gets people jumping through hoops for you is money. If you’ve got enough money you don’t need celebrity. I love getting paid as an actor but I am not interested in being a well-known person I’d much prefer to be unknown and stare at the Elephanta caves or eat panipuri somewhere or go for a walk in Lodi Gardens. Being unknown in my own country is often not available to me,” he says.

“The only power is money. I’d rather be influential than famous. The only thing that gets people jumping through hoops for you is money. I love getting paid as an actor but I am not interested in being a well-known person,” says Saif Ali Khan

And every time there is ugliness in public life, someone accusing him of love jihad and someone else of disrespecting religion, he tries a little Christian charity. “I don’t blame them. Instead, you focus on those who love you.” It is a number that is growing with every faultless performance.