A prequel to the legend, but with Russell Crowe miscast as the witty and lovable thug. 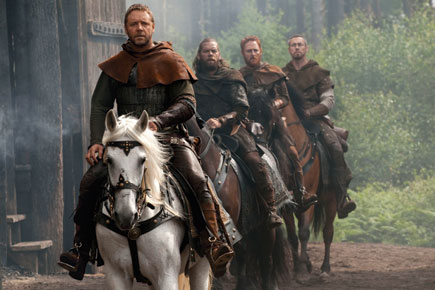 A prequel to the legend, but with Russell Crowe miscast as the witty and lovable thug.


In Robin Hood, King John is presented as an ineffectual and despotic monarch, but in 1215, he did eventually sign, or was forced to sign, the Magna Carta. This is the charter that gave legal rights to the king’s subjects, and, arguably, was the document that led to constitutional law today.

Towards the end of Robin Hood, director Ridley Scott, in an outrageous leap of imagination, presents Robin Longstride, a yeoman posing as an aristrocrat, as the author of the first draft of the charter. King John rejects it and declares Longstride (Crowe) an outlaw.

In other words, Robin Hood is a prequel to the legend and deals with the violent and poverty-stricken history of England during the time of the Crusades, when Richard the Lionheart was an absent monarch and his brother John caretaker and later successor. Death and taxes are the only reality here, and if it weren’t for the gorgeous photography, the film could be called ‘Economic mismanagement and the rise of the English lawless classes’.

Photographer John Mathieson’s use of light on the English Channel in rough weather, followed by a calm journey up the Thames to the English court is breathtaking. Later, when the French land on English beaches, he films it like the Normandy landings, with horsemen, archers and swordsmen instead of tanks and armoured cars.

However, the drama doesn’t match the landscape. Robin Hood, the ballads say, was as sharp with words as with his archery. When Crowe mumbles, head down, we know he has been miscast. When he passionately and inappropriately kisses Marion— first while she is grieving for her father, and later in the middle of a battle in which he is fighting for England and his life—we know he has been misdirected. What is Scott doing to his favourite actor?