Rendezvous with a Character

Purandar Vitthal, the character played by Nawazuddin Siddiqui in Bombay Talkies, is based on Ashok Karangutkar, a common man with an uncommon touch 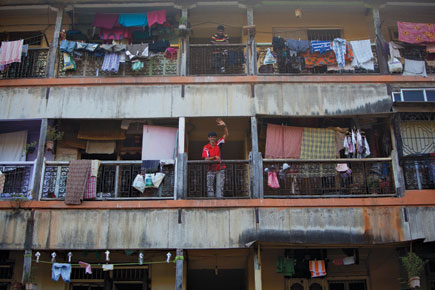 Purandar Vitthal, the character played by Nawazuddin Siddiqui in Bombay Talkies, is based on Ashok Karangutkar, a common man with an uncommon touch


Dibakar Banerjee’s short film, Star, in the recently released omnibus Bombay Talkies, is a rendition of Satyajit Ray’s short story Patol Babu Film Star. It features Nawazuddin Siddiqui as Purandar Vitthal, a man who relives the most fulfilling years of his life as a stage actor by becoming a storyteller to his daughter. When they joined Banerjee as chief assistant directors, Shabani Hassanwalia and Samreen Farooqui were asked to find a real-life Purandar Vitthal. Ashok Karangutkar is that man.

His friends and neighbours call him ‘lambu’ or ‘bandiya’. He is tall and lanky with sullen cheeks that serve to highlight his eyes. When he talks of the incidents that mark his life, he uses his eyes to convey wonder and surprise. His face is reserved for more dramatic expressions. A conversation with him is coloured with theatrical pitches, rising-anticipating-falling. His bony hands and long fingers gesticulate emphatically and his body moves in tune with the emotions he is conveying. He doesn’t remember having told Samreen and Shabani anything special but for the two, conversations with him were fascinating. “You can’t stop listening to him,” says Samreen.

“They came here first around Ganesh Chaturthi because they liked our building,” says Karangutkar, who lives in Lalbaug, which used to be the mill district of Mumbai. “The location manager felt my house would be the best place to shoot Star in. They brought along Shabani and Samreen the next time they came and we got talking.”

Amidst the decision to give away his home for 15 days, Ashok was approached with another unusual request. Shabani and Samreen explained to him that he intrigued them. His life had similarities with that of Vitthal and they needed his help to flesh out the character. “Though the script is completely based on Satyajit Ray’s short story, the character, his nuances and behaviour and even the events that affect his life have been drawn from instances in Ashok and Nawaz’s (Nawazuddin Siddiqui) lives. Purandar’s character is an amalgamation of these two,” says Samreen. She says Ashok was generous to them. “He opened his house and heart to us immediately with such endearing honesty. Even when the shooting was in progress, we would sometimes just sit together and talk for hours.”

Shabani and Samreen, who work under the label Hit and Run Films, saw a story in this serendipitous accident. On their next visit, they told Ashok that they wanted to make a documentary on him. This is in the post-production stage and Samreen says that while they haven’t decided what to do with it, it was a magical experience.

According to Ashok, the duo started shooting the documentary almost immediately, even before shooting for Star had begun. “Mai kuch bhi karu Jigi (cameraman Jigmet Wangchuk) apne camera se shoot karta. Sone jau, khaane jau, kaam karne jau, kapde sukhane jau, kuch bhi karu, uska camera saath aayega (No matter what I would do, Jigi would be there with his camera—whether I was eating or sleeping or working or drying clothes, his camera would follow me),” he says.

Ashok is a raconteur and this is evident as he speaks of his experiences with the film crew of Bombay Talkies. “You know that scene, Siddiquiji is running back home to his daughter. It is night time and he must run through a patch of land occupied by a procession. When we got to the set to start shooting, all these people from BMC (Brihanmumbai Municipal Corporation) came in and started creating trouble. Poora maidan khali karvaya aur hamara saman le ke jama kar diya. Bole, ‘Fine bharna padega.’ Arrey! Abhi poore panch-dus minute ki shooting bhi nahi karni thi, aur fine bharna padega?” (They made us leave and took away our equipment. They said, ‘You will have to pay a fine.’ Pay a fine for just shooting for five to ten minutes?)

“Phir? Phir kya? Main gaya BMC aur maine baat ki, sham tak saara saman aur shooting permit dono dilwa diya tha.” (Then? Then what? I went to the BMC office and had a chat with them. By the evening, I had convinced them to return all our equipment as well as to grant us a shooting permit.)

Ashok has lived all his life in the small flat that served as Purandar’s house in the movie. He sleeps where Purandar did, in the balcony, waking up to the sight of the Lalbaug flyover and the sounds of early vehicles. His father was an employee at Phoenix Mills. “When the mill burnt down, he lost his job. They gave him some money, but it wasn’t enough. So bhaiya (my brother) and I had to start working when I was 17,” he says. Ashok started with making chokes for tubelights. “I have been a cook, a driver, an electrician, a mechanic. Aisa koi kaam nahi hai jo maine nai kiya (There is no such work that I have not done).” He says he works independently as an interior designer now. “Ghar banana ke saare kaam kar sakta hu, plumbing, wiring, sab kuch. (I can do everything from plumbing to wiring.)” Vitthal’s life was also a series of jobs.

Ashok was a Marathi theatre actor in his teenage years. But unlike Vitthal, who finds a rejuvenation of sorts in the movie from his art, Ashok has lost all passion for it. In 1996, he acted, very grudgingly, in an ad film for Manikchand gutkha. He was featured as the apex of a human pyramid formed to reach the dahi handi in celebration of the Janmashthami festival. Like the protagonist in Star, this role came to him by chance. “I was in the gym when I got the call. They needed someone who could climb the top of the pyramid and I used to do that in Govinda (festival). The filming took too long to finish and Arpit (his son) was sick at that time. Once I was done, I ran back home to cheer up my son.”

In Patol Babu Film Star, Patol Babu leaves the film set without taking any money because creative satisfaction for him outshadows his need for money. In real life, Ashok’s need to reach home to his unwell son was much more urgent than his need for money. In the short film, Purandar’s reasons for abandoning his fee are a mix of the two. “What Ashok has, and you will see this reflected in Purandar’s character as well, is the ability to dream big and wholeheartedly pursue it. That is a quality Nawaz possesses as well. That is what unites them,” says Samreen.

Ashok’s son Arpit has similar dreams. He wants to do film editing and says he shall learn it from Dibakar Banerjee and no one else. There is also Jaymala, Ashok’s 66-year-old mother, who lives in the house. She says Nawazuddin would never ask her to move for the sake of the frame. If they came to shoot at odd times, Nawaz would ask for her permission very respectfully and make the crew wait outside till she finished with her work.

Ashok still misses the bustle around his life when the shooting was going on. “Bahut yaad aati hai un logo ki. Nawazji abhi bhi baat karte hai. Har kuch dino me unka phone aata hai. Puchte hai ‘Kaise ho? Meri film aa rahi hai. Dekhna jaroor’.” (I miss those people a lot. Nawaz still talks to me. Every few days he calls and ask, ‘How are you? My film is about to release. Watch it for sure.’)