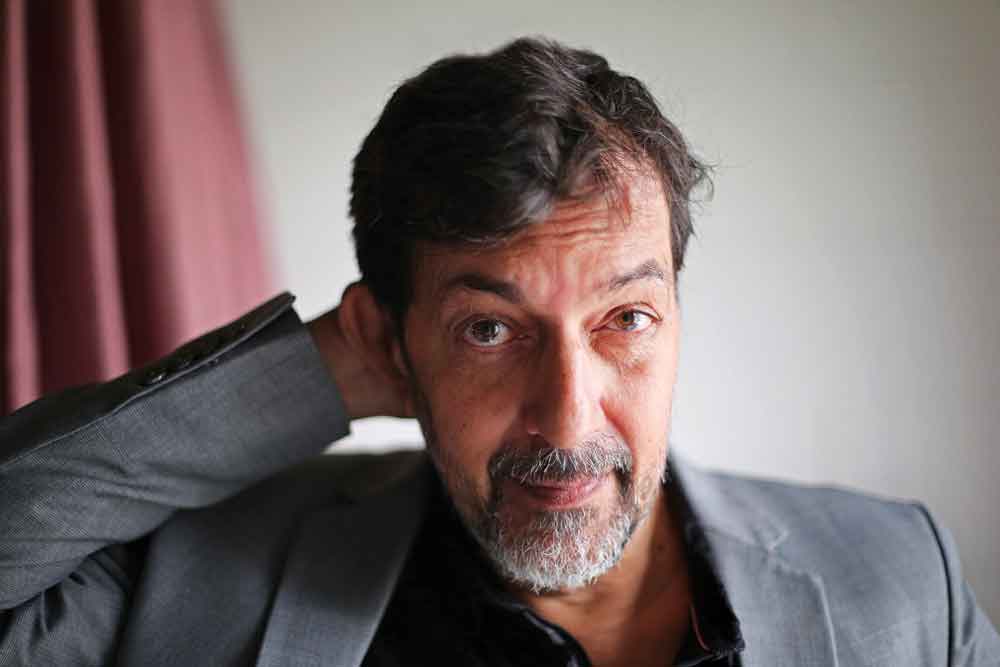 
T O KNOW RAJAT KAPOOR’S friends is to know him. It’s a group of some of the country’s most talented actors and writers who’ve known him for almost three decades. They’ve often lived in the same building, hung out after work, acted with each other, and even hustled together. Take Vinay Pathak. The actor says Kapoor was one of the first people he met in Bombay when he came back to India from New York, where he’d studied at Stony Brook Univer­sity. He still remembers sitting on the steps of Sterling Cinema in 1995 in Bombay and watching Quentin Tarantino’s Pulp Fiction at an international film festival and “being blown out of our minds,” says Pathak. Pathak has been part of Kapoor’s theatri­cal and cinematic experiments since then, whether it was dubbing for a few characters in Kapoor’s first feature film, back in 1997, Private Detective: Two Plus Two Plus One, or hanging out in a few party scenes in his sec­ond film, and the first to release theatrically, Raghu Romeo (2003), with a young Vijay Raaz acting as a waiter obsessed with a soap opera star played by Maria Goretti.

At 61, despite insisting on retaining artistic control in an industry that notori­ously tries to flatten tall poppies, Kapoor has made eight films, done countless improvised versions of Shakespeare plays, and built a formidable reputation as a character actor in more than 70 films and increasingly now in web series. But it is as informal paterfa­milias of a fine group of actors who have created some memorable characters on screen that he will be best remem­bered for. Take his most recent film, his eighth, RK/RKAY, where he plays a di­rector of a film within the film, starring himself, in a double role, as a character named Mahbub Alam. Somehow, Alam, written as a fifty’s hero, escapes the screen and ends up in the director’s home, reminding everyone of a lost way of life. Here he strikes a refreshing note of sensitivity, with his poetic outpour­ings, his cooking (whether it is anda bhurji or biryani), and his attention to the director’s wife who en­joys the sudden male interest in her.


“I feel really grateful I’ve been allowed to do what I love in the way I want to do it,” says Rajat Kapoor, actor and director

Made for ₹ 3.5 crore and released with just 75 prints, the story came to Kapoor 10 years ago while he was shaving and wondered what would happen if his reflection went missing. In a way Kapoor is making a comment on the disappearance on the Muslim social from theatres, as well as of the Muslim as neigh­bour, friend, relative. “When was the last time we saw a Muslim social? Nikaah in 1982. Or maybe Gully Boy in 2019?” he asks. The film within the film is written in Urdu, which makes the producer nervous, as if it were a foreign language. The producer is played by Manu Rishi Chadha, another brilliant member of the Rajat Kapoor Family. Chadha, a decade younger, has known Kapoor since their days in Chandni Chowk. “I was at my father’s helmet—and other motor accessories—shop in Kucha Natwa in Chandni Chowk, and he would pass by sometimes. We would call him Jesus Christ after a show he had shot on Easter for Doordarshan. He would acknowledge us sometimes, sometimes he wouldn’t,” recalls Chadha. Kapoor’s grandparents lived in Katra Neel and his father ran a printing press, called Arsi Printing Press. By 1971, he had moved to Daryaganj with his father, but would still visit Chandni Chowk to meet his grandparents.

Much of that world is captured in Ankhon Dekhi, perhaps his finest film, which speaks of a curious philosophy of life—of not believing in anything unless one has expe­rienced it. As the man who experiments upon himself, Sanjay Mishra, is heartbreak­ingly authentic, taking viewers on a ride of laughter and tears. If his friends don’t find themselves getting parts in his films, they are happy to insinuate themselves in tiny cameos, such as Ranvir Shorey, who comes in for a second as a back­packer asking direc­tions to Jama Masjid. Shorey calls Kapoor his elder brother (in spirit, as he does have two elder brothers). “I do theatre only with Rajat,” says Shorey, who was introduced to him by Pathak when both were veejays. He stepped in when there was a vacancy in C for Clowns. “I consider it a refresher course in acting,” he says. “There is always one moment in working with him when you hit a wall, and then you quietly shed a tear and get back in front of the camera. It’s always because he expects a lot from you and you feel you cannot deliver,” he adds. Kapoor has given Sho­rey some of his finest roles, whether it is the wannabe swinger in Mixed Doubles (2006) or the mafia don lookalike in Mithya (2008).

“He loves his actors, nurtures them, and even if he corrects them, it will be a whisper in your ear, so that you’re ter­rorised but not publicly humiliated,” says Chadha, who has done everything from stolen a chair from a cigarette store for a scene in C for Clowns at Prithvi Theatre to hung out at his home almost every night when they lived in the same building on Yari Road, Mumbai. “Rajat loves conversations and often many things we say in those find their way into the movies as well,” says Chadha. But for Kapoor the film is above everything else. “So if you’ve committed your dates to him and want one day off for something really urgent, you’re not likely to get it, unless you beg the assistant director,” he says. Chadha recalls him misplacing a two-minute film in an auto, which was to run in C for Clowns. Chadha went to 12 auto driver associations to look for the driver, to no avail. Kapoor was so upset that he cried, he adds.

The love for cinema was deeply embedded in a 16-year-old Kapoor who studied at Daryaganj’s Happy School and then did an undergraduate degree at Shri Ram College of Commerce, Delhi. Young Kapoor watched the great auteurs of cinema, Ingmar Bergman, Jean-Luc Godard and Werner Herzog at Celluloid film society, co-founded by documentary filmmaker Pankaj Butalia. “I was stunned that such a world existed,” recalls Kapoor. A course in French at the Alliance Francaise took him to the basement where K Madavane was running an experi­mental theatre group. That culminated in six years with the Chingari theatre group and then a course in direction at the Film and Television Institute of India in 1988. Directors Rajkumar Hirani and Sriram Raghavan were a batch senior, Sanjay Leela Bhansali was his contemporary, all artists he admires immensely.

Then began his journey with cinema, with Kumar Shahani on Khayal Gatha (1989), starring the magnificent Mita Vashisht. Making movies was never easy for him, beginning with his first, Private Detective, which was made for the now defunct Business India TV and was lost to audiences for many years. “Raising money for every film has been a struggle,” he says, but one in which friends have contributed generously, till this day. RK/RKAY was crowdfunded and cost ₹ 3.5 crore to make, even with practically no payment to actors and technicians, which include his long-time cinematographer Rafey Mahmood and art director (and wife) Meenal Agarwal.

HE HAS GOTTEN lucky some­times. After Mixed Doubles did well, independent producer Sunil Doshi gave him ₹ 60 lakh to make the black comedy Bheja Fry, which became a sleeper hit in 2007, where Pathak played a buffoon who is exploited for his entertainment value by the uppity Kapoor. It was followed by Mithya and Kapoor says with wry humour, “We were big for two or three years. Then the recession hit us and multiplexes, which had been catering to indie films got swamped by big budget movies with 4,000 prints.” He was back to looking for funding and wrote about Ankhon Dekhi on Twitter one day. Producer Manish Mundra replied from Nigeria, in what Kapoor thought was a prank. He gave him ₹ 4.5 crore to make it. But with his next, Kadakh, it was back to scrimping and saving. A farce about an adulterous man (played by Shorey) and his writer friend (played by Kapoor), it was made for ₹ 2.5 crore.

Sometimes the process of making a film can be heartbreaking. “I remember when Ankhon Dekhi released, I went to City Mall in Andheri and there were just 25 people in the hall. Then word spread and it ran for three to four weeks. Sixty thousand people watched it but many more saw it on streaming and so many people have come to tell me they loved it. I feel really grateful I’ve been allowed to do what I love in the way I want to do it,” he says.

Since his first major role as the creepy abusive uncle in Mira Nair’s Monsoon Wedding (2001) followed soon after by playing Preity Zinta’s Mahesh uncle in Dil Chahta Hai, which was released later in the year, Kapoor has developed a side hustle. OTT has expanded the opportunities for him, with lead roles in the desi version of Call my Agent on Netflix. If as a director Kapoor is very sure of what he wants, as an actor he is totally submissive. “I might suggest a few things but I leave it to the director,” he says. “I don’t get great roles,” he says, but OTT may well change that. Coming up is Jehanabad where he plays a Bihari politician, Radicals where he is a terrorist, Pirates where he is the captain of a ship, as well as a key role in the much-awaited remake of Israeli hit Fauda, set in Kashmir.

He has, incredibly, a ninth film ready for release, featuring his favou­rites Pathak, Shorey and Saurabh Shukla. It’s called Who Killed Sohrab Handa and it too has been crowd­funded. At any time, he has four to five scripts ready to be filmed. He keeps two months aside in a year to write, in long hand, in Hindi, in English, his charac­ters swimming in their own peculiar philosophies. His friends, old and new, cherish the friendship he offers. Maya Sarao, a relatively new member of his floating family, says, “I have a special place in my heart for him, I could say so very much but what is important is he doesn’t simply make films, he builds families and he nurtures them through and through.” And they are as present for him as he is for them. So, if Maya was the lovely daughter in Ankhon Dekhi, which was a meaty role, she was also a minor character audi­tioning for a role in RK/RKAY.

Kapoor has given himself entirely to the movies. The movies have responded with love, in spades. 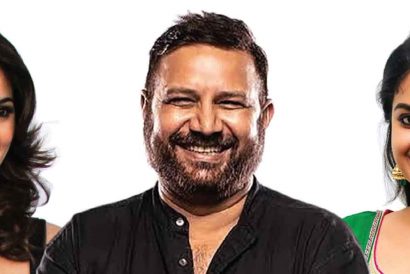 Eighteen years after Murder catapulted her to sex goddess status, Sherawat is basking in the glow of RK/RKay