At 49, she considers it a great privilege to be asked to play her age onscreen. Pooja Bhatt, feisty teen idol and magazine cover magnet of the 1990s, is back, headlining one of this summer’s biggest streaming series 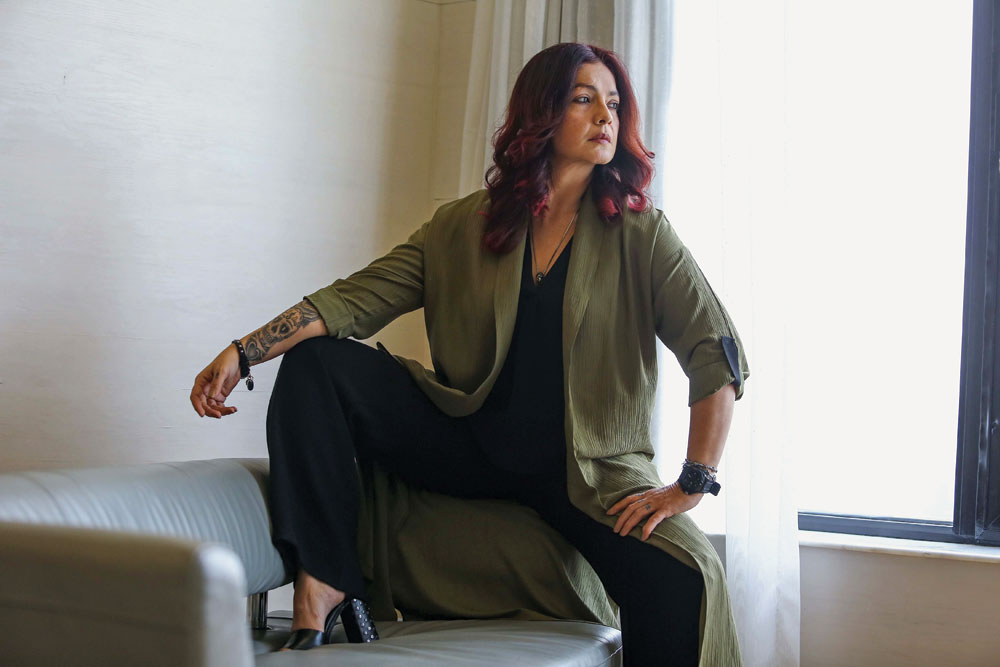 
IN 1989, IN Daddy, she played a young woman who helps her father battle alcoholism. At 45, she announced that she too was an alcoholic. Now with the alcohol abuse behind her, she says, “I wonder whether the movie would have worked if it had been called Mummy? Even addiction is a male privilege.”

That’s Pooja Bhatt for you. A one-time teen idol, sometime hands-on director and now comeback queen. She first stepped in front of a camera after submitting to her father’s direction who won over her reluctance by pretending to offer the role to Twinkle Khanna. Now 20 years after her last major role in Everybody Says I’m Fine!, Bhatt is back in the spotlight. And unlike the character she plays in the Netflix miniseries, Bombay Begums, who is ever conscious of the bags under her eyes and the hot flashes she suffers from, Bhatt is proud of every wrinkle and every fold of her body. It has informed her work and allowed her to let the “floodgates open”. “Being back in front of the camera is so liberating and cathartic,” she says.

The result is a compelling Rani Singh Irani, who negotiates her new role as CEO of a private bank, even as she tries her best to win over her stepchildren. Bhatt portrays Rani’s hunger for love with a desperation and rawness rarely seen on screen, and when she finally breaks down, urging her stepdaughter to risk her life for her art, not for some callow boy, she may as well have been talking to her younger self. “I remember I wanted to play the girl in Aashiqui [directed by her father, the 1990 musical starring Rahul Roy and Anu Aggarwal was a blockbuster hit and its music is popular even today]. But my boyfriend at the time refused to let me do it. And I, so in love, said no. Many years later when I reminded the boy, now a man, about it, he didn’t even remember.”


I realised there is no happily ever after. It took me time to realise that. I would keep asking,‘why me?’ But I finally understood, ‘why not me?,’” asks Pooja Bhatt, actor and director

Bhatt may have been a star child, with all the attendant benefits of nepotism, including tailormade roles in movies such as Dil Hai Ke Manta Nahin (1991) and Sir (1993), but she says she lost herself at some point. “The expectation in the nineties was that women were to be seen and not heard. Every pore of my body rebelled against that,” she now says. At 25, she turned producer with Tamanna (1998), written by her father which she wanted to produce, and that led her to a different path. But four films down, she was still not fulfilled, even though she launched new talents such as John Abraham and Udita Goswami. Bhatt drifted along in a marriage for 10 years [with former Channel V veejay Manish Makhija] because “I wanted to prove that I could make a marriage work for a decade,” but left when she realised she had forgotten the woman she was. “Luckily I didn’t have children,” she adds.

“You know, when I was very young, Helen Aunty [the actress] gave me a collection of Grimms’ Fairy Tales but I realised there is no happily ever after. It took me time to realise that. I would keep asking, ‘Why me?’ But I finally understood, ‘Why not me?’’ she says.

The ability to take the blows head-on is what motivated Bombay Begums’ creator Alankrita Shrivastava to pursue Bhatt. Shrivastava says, “For Rani, I definitely wanted an actor who had a combination of strength and vulnerability. I wanted somebody who looked like there are many layers to who she is. Just when you think you’ve understood her, you realise there is more to her. I wanted somebody who you could look at and feel like, ‘Yes, she is the boss, she owns the room.’ And yet behind that confident facade is a life of battles lost and won.”

Shrivastava had been a Pooja Bhatt fangirl in her childhood and remembers watching Dil Hai Ke Manta Nahin with her sister 21 times. It became their favourite summer holiday occupation. “Pooja was so refreshing, feisty and modern, and ahead of her times,” she recalls. Indeed, Bhatt’s magazine covers and bikini shoots for advertisements were often red flags to arch conservatives. She kissed her father Mahesh on the cover of Stardust magazine in 1994 and then appeared in a bodypainted tuxedo for the cover of Movie magazine in 1995. As if that was not enough, Stardust, in order to ostensibly highlight the issue of morphed photographs, used one of an almost naked Bhatt on its cover. It was enough to anger the Akhil Bhartiya Agnishikha Manch, an organisation which claimed it was devoted to the preservation of Indian values, which moved the office of the then Maharashtra Minister of Culture Pramod Navalkar to get copies of the offending issue removed from the stalls.

ALL OF THIS has been part of her journey, and Bhatt is proud of every stumble. It has made her tougher but also allowed her to retain her vulnerability. In fact, she had a cancer scare in the period leading up to Bombay Begums, while she was doing her make-up and costume tests, but insisted on going ahead. It was only much later that it was diagnosed as thyroiditis, says father Mahesh.

Rahul Bose, her co-star in Bombay Begums and director of the film she last appeared in in a major role, Everybody Says I’m Fine! (2001), says she has always been an authentic human being with a clear perception about herself, something one cannot say for many people today. That makes her fearless, he says. Couple that with her emotional intelligence and acting talent and you have someone who is more than a joy to work with. “She has always been an evolved soul so I don’t think there have been any evolutionary leaps she has needed to take in the last 20 years. We picked up exactly where we left off during Everybody Says I’m Fine! On the sets of Bombay Begums there was ease, laughter, merciless teasing [on her end] and enormous affection. She remains one of my favourite people,” adds Bose, who is enjoying something of a renaissance himself with fine performances in Netflix’s Bulbbul and Bombay Begums.

The expectation in the nineties was that women were to be seen and not heard. Every pore of my body rebelled against that, says Pooja Bhatt

Bhatt lives away from Mumbai’s hullaballoo now, in a state her father describes as “single blessedness” at a farm in Kalote near Lonavala in Maharashtra. The only man in her life is her 14-year-old dhartiputra dog, Gingeroo. Her proud father says, “The other day I was driving away after meeting her at her farm, and I saw in her someone walking towards life, not away from life.” She has created her own world, “a pearl” says Mahesh, and she now even works closely with the tribals of the village. But she has no intention of staying away from acting now, although as she puts it, “after such a fine meal you can’t settle for junk food”.

Her friends and allies are delighted to have her back. Tanuja Chandra, who was associate director on Zakhm (1998), says she was a joy to work with. “It was lovely for me to work closely with her to help create what I think is one of her most memorable performances. It was vulnerable, it was strong, it was emotionally intense and it was deeply affectionate. I remember so clearly, a day when we were shooting a song in which she had to lie in her bed for one of the verses—Pooja didn’t leave the bed for hours because she wanted to stay in that moment. So, between shots even as lighting would go on, she’d wait patiently in that same spot, not moving away, so that she would remain ‘in the zone’. She’s one of the most responsive and open actors I’ve worked with.”

Indeed, the tragedy of many women stars of the ’90s is that they didn’t get too many opportunities to display their acting skills; most were reduced to being arm candy of the heroes. They now have an opportunity to parlay their life experiences into their work, and it is a joy to watch. They’ve walked, they’ve stumbled, they’ve gotten up, on their own two shaky feet, not assisted by their husbands or their fathers. They’re willing now to dig deeper into their souls and wear their hearts on their sleeves. The burden of beauty is the most difficult one to shed, says Mahesh. He adds, “It’s the last vanity, but in doing that, in radiating authenticity, you draw people in. It is as exhilarating for me as when, with trembling hands and a concerned heart, I saw Pooja going off on her bicycle by herself.”

He witnessed with great distress her battle with alcohol, but he did not play counsellor. “I had no moral right to lecture her,” he says. He wanted her to take the reins of her life herself. “It’s not easy for a woman who is suddenly put in the ‘has-been’ category by society, who has no nourishment from a relationship or anything enduring or meaningful in her life to deal with ageing,” he says. But there came a day when he was at the Bengaluru airport waiting to take off to the Maldives with wife Soni Razdan and daughters Shaheen and Alia, and he texted Pooja, ‘If you love me love yourself because I live in you.’ She got the message. She has been sober for over a year now, and collaborated closely with her father on the 53-day shoot of Sadak 2 (2020) starring Sanjay Dutt and Alia.

Bhatt has fought her own demons, reclaimed her life, and is now finally allowing herself to revel in the praise that is coming her way for Bombay Begums. “I was an accidental star,” she says, referring to her first stint as an actor. “Success was something someone else defined for me. I was not terribly ambitious and kept asking myself, is this what I want?” Direction was her salvation then. It may well be acting and living—entirely on her own terms—now.