Onscreen depictions of journalists tend to be reductive at best, hyperbolic at worst 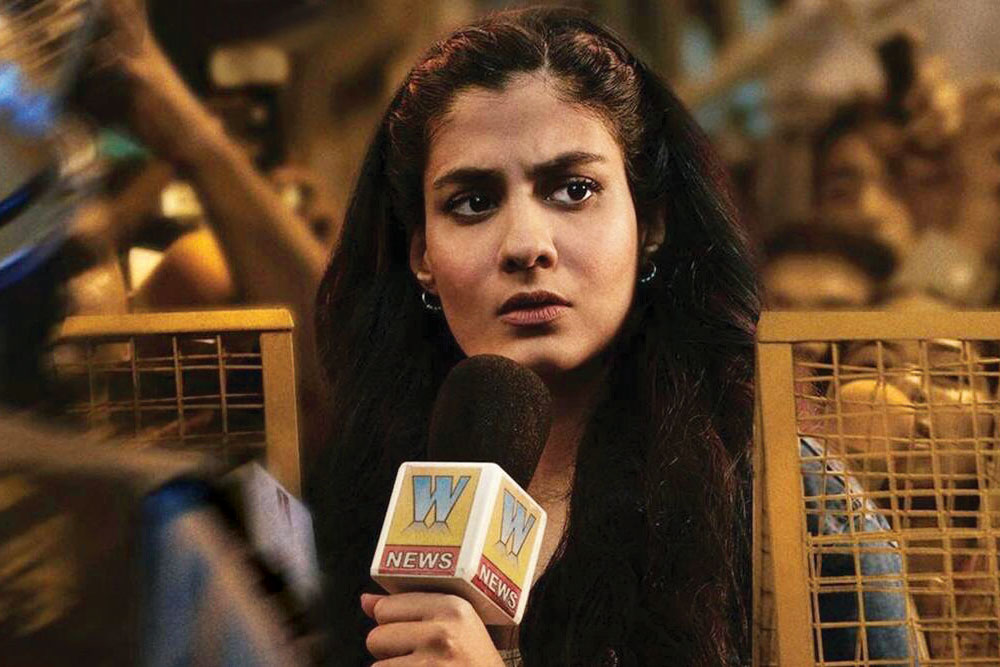 
IN A BRILLIANT MOMENT in Dibakar Banerjee’s Oye Lucky Lucky Oye!, (2008) actor Rajendra Sethi plays a sensationalist crime show anchor, who uses words like sansanikhez (sensational) and hairatangez (amazing) all too often. Sethi’s character is in the middle of his piece-to-camera after Lucky (Abhay Deol) has been arrested, when he abruptly stops. He looks at his cameraperson and says, “Yaar, yeh main ‘sansanikhez’ aur kitni baar bolunga? Ghar pe biwi puchti hai khaana kaisa banaa hai, muh se nikalta hai ‘sansanikhez’ (Hey, how many times will I say ‘sensational’? My wife asks how is the food, and I reply ‘sensational’).” It’s a sharp moment where the film humanises the caricature of a reporter, whose only job is to scream adjectives at the camera to scare his audience about crimes taking place in their vicinity. It’s also a rare moment in a Hindi film, where we’re shown a reporter who has a life beyond their mere ‘function’ on screen.

It is 2021. And in Hindi cinema, the portrayal of a ‘journalist’ continues to be reductive. It’s not like one expects documentary-like authenticity, but the unchanging portrayal of a journalist in Hindi films and recent OTT shows, signals the filmmakers’ sheer inability to humanise them. To borrow a phrase from renowned screenwriter Aaron Sorkin, the ‘journalist’ in Hindi cinema seems like a pebble in the shoe for most mainstream filmmakers. Even when they do get the basics right, the script most often lets down the actor.

And testament to that might be actor Shreya Dhanwanthary’s two recent roles in Sony LIV’s smash-hit Scam 1992, where she plays veteran financial journalist Sucheta Dalal, and as a ruthless TV reporter, who inadvertently compromises national security while chasing a story, in Amazon Prime’s Mumbai Diaries: 26/11. Dhanwanthary tells me how she was shooting for both shows simultaneously, pulling double shifts. “At that point I was pretty much running on autopilot and muscle memory,” Dhanwanthary mentions with a laugh. To her credit, viewers might not be able to tell.


My reservations with Dhanwanthary’s characters were definitely not her acting, but how frustratingly uncomplicated they are. As Sucheta Dalal, Dhanwanthary single mindedly pursues sources about how Harshad Mehta is gaming the system, she passionately argues with her editors, borrows cigarettes from her colleagues before a tight deadline, and there’s even an implied romance between her and a long-time colleague. What are her interests outside the newsroom, is she on good terms with her parents/siblings, how does she overcome everyday domestic upheavals (like most Mumbaikars) to go about her job? Who is she, without Harshad Mehta in her life? We barely find out.

I scoffed at a scene in the latter half of the show, when she’s asked to reveal her sources, and Dalal’s character responds with something to the tune of, “I will take my sources to my grave.” Now, as someone who grew up watching cinema in the 1990s, I do make room for implausibility in a story. But in the fact-based environs of Scam 1992, Dhanwanthary’s line feels too false and shatters any illusion that the show might have built. These are the words of an idealistic cub reporter, instead of someone like Dalal who has amassed over a decade’s experience by this point in the show’s universe.

With Mansi, we were trying to portray a particular section of the media that wasn’t particularly ethical when it came to their 26/11 coverage. Not everyone was on their best behaviour that night,” says Shreya Dhanwanthary, actor

As Mansi in Mumbai Diaries: 26/11, even though the timeframe is relatively short across a few nights, Dhanwanthary is cold and precise in her performance as a TV reporter who wants to ‘break the story at any cost’. “With Mansi, we were trying to portray a particular section of the media that wasn’t particularly ethical when it came to their 26/11 coverage. Not everyone was on their best behaviour that night,” Dhanwanthary says. The media is depicted in a matter-of-fact way, but it still ends up reinforcing a stereotypical image of TV anchors, who insensitively rummage through the sorrows and horrors of the general public to maintain their TRPs. “But mind you, she wasn’t going out to spread fake news or put just about anything on air. She wanted to get to the truth, just like Sucheta Dalal,” Dhanwanthary adds.

According to Rita Kothari, a professor of English at Ashoka University, in the Bollywood realm a ‘smuggler’ is more plausibly depicted than a journalist. However, she maintains that the notion can’t be generalised, because mainstream cinema’s nuance often hides in plain sight. “Take for example, Johnny Walker’s character in Naya Daur (1957). He’s a city-bred journalist who goes to a village. He’s so disconnected that when people speak to him in Hindi, he responds in English. He’s surprised nobody understands him. I think this gap between a journalist and rural India has been a recurring theme in many Hindi films,” says Kothari. She touches upon how this caricature of a character eventually sides with the village folk.

Kothari notices how the ’50s and ’60s were a time when the patrakaar usually lived a frugal life, but there was this sense of idealism pervading their lives. She observes that around the ’80s the journalist character began to be depicted as someone who would compromise their idealism for success. “There was this movie Kamla (1984), about how tribal women are being sold in a particular region. To prove his point, a journalist goes and buys a woman. He’s sort of treating her like a commodity, touching her breast and hips. When he brings her home, the woman asks the man’s wife, “How much did he buy you for?” It was quite a stunning story, but it was obviously not mainstream,” recounts Kothari. She also mentions the film Saath Saath (1982), where an idealistic writer after facing significant hardships, transforms into a ruthless publishing magnate, much to his lover’s disillusionment. Kothari believes it was around then that the idealistic journalist-type began to seem fractured for the first time.

I have memories of many Hindi films where an ‘idealistic journalist’ is (invariably) an eyewitness in a case, and has to reach the court during the film’s climax. More often than not, these characters would end up getting run over by a vehicle on their way to court, unless the witness was Sunny Deol himself in Sangeeth Sivan’s Zor (1998). Aziz Mirza’s Phir Bhi Dil Hai Hindustani (2000)tried to satirise the brand-new phenomenon of 24×7 news channels, where players constantly tried to outdo each other, using bright colours, gigantic sets and one of the most famous lead pairs of Bollywood in that era: Shah Rukh Khan and Juhi Chawla. The film has this almost heightened pitch throughout its runtime, while parodying the soullessness of 24×7 TV news. But it’s also hard to deny how the film often plays like a schlocky ’80s movie, where a character is primarily driven by vengeance because of trauma inflicted on his daughter.

What happened post that doomed the journalist character in Hindi cinema: Madhur Bhandarkar made a ‘realistic’ film on the profession. Once Page 3 (2005) became a benchmark for realistic depiction of journalism, it’s no surprise what followed were equally hollow renditions like No One Killed Jessica (2011). Here, Rani Mukerji’s Meera Gaity tried to compensate for her character’s lack of ‘truth’ with an excessively pronounced outspoken way of speaking. Her depiction had no veneer of truth.

Noor could have been a critique of a generation of young journalists who often mistake their role to be that of influencers, but it never reaches that level of awareness

It’s no surprise that almost a decade after Rani Mukerji’s outing as a journalist, we got a film like Noor (2017), starring Sonakshi Sinha. An adaptation of Saba Imtiaz’s novel Karachi, You’re Killing Me!, the Sunhil Sippy film merely gave us a series of frothy vignettes in an upstart journalist’s life, where she douses her disillusionment in rum and coke on weeknights, stares urban poverty in the eye, craves fame and respect from her colleagues. The film is so overwhelmingly artificial, where even Sinha’s klutzy routine looks like a pale version of Anne Hathaway in The Devil Wears Prada, that it never becomes something for a viewer to truly invest in. Noor could have been a critique of a generation of ‘young journalists’, who often mistake their role to be that of influencers, but it never reaches that level of awareness.

Both Dhanwanthary and Kothari believe that it’s the industry’s approach in general, and not just the portrayal of journalists, where they tend to sacrifice nuance. “Hindi cinema has always dealt with aggregate values. It’s nearly always portrayed archetypes, not to say that it’s not capable of subtlety,” says Kothari. “Even our heroes are what? They avenge something wrong that happened to a woman. Among the new heroes, they’re lost boys who find their purpose by falling in love…” says Dhanwanthary, adding “… we have a very black-and-white perspective on characters.” Dhanwanthary recounts how many villainised Sucheta Dalal for reporting on Harshad Mehta. “He (Mehta) was profiting out of many people’s misery, but even after all this people still put him in the ‘white box’,” she says.

Dhanwanthary mentions how some of the criticism levelled at her character in Mumbai Diaries was because she portrayed her character’s inner turmoil. “There needs to be a conducive environment for both sides to have the full freedom in expressing, as well as accepting. Sometimes, there’s a mismatch of timing, sometimes it’s a mismatch of era, the environment, the political climate. Even if we try nuance, there is a section of the audience that understands ‘Kutte main tera khoon pee jaunga (Dog I will drink your blood)’ more clearly. There’s a section that craves nuance, but after which it becomes a numbers game,” she says.

Given the state of TV news in the last few years, one might even wonder if satire could match up to it. Is it possible that a section of the media losing credibility has contributed to these one-note portrayals even more? Kothari adds that Bollywood is rarely curious about worlds of work. People usually have a big house with a giant staircase, and there’s the odd mention of a tender. But what business is the family in? Nobody knows. “Bollywood doesn’t give you the nitty-gritty of work life, or for that matter even domestic life. It doesn’t tell us who boiled the milk, who made the tea, or who opened the front door in the morning. It manages to not show you the mundanity of life,” says Kothari.

However, writing a believable journalist is not an impossible feat, as we saw in Hansal Mehta’s Aligarh (2015).

Rajkummar Rao is fascinating in the role of a reporter, who is merely expected to foreground Manoj Bajpayee’s protagonist. It’s probably fitting that a film that gets the reporter right argues for a man’s dignity.