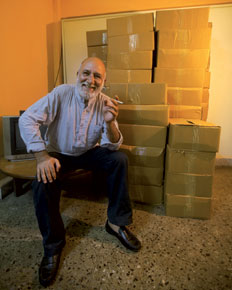 
‘Still to sell 650 copies. Order. Order,’ wrote Kamal Swaroop on his Facebook wall in May, urging friends and acquaintances to pick up a copy of Tracing Phalke, a limited edition coffeetable book on Dadasaheb Phalke, the father of Indian cinema. Conceived of and written by Swaroop and printed by NFDC, Tracing Phalke—his “talisman” as he likes to call it—can be seen as a culmination of its author’s two decade-long obsession with Phalke. Few in India know Phalke’s life and times as well as Swaroop, who has made several short films and documentaries and penned a comic book on him, besides giving lectures and conducting Phalke-related workshops across India. What’s more, he has also created an online database 20,000-pages long, which claims to cover Phalke’s entire life.

So how did Swaroop end up taking the idea so much to heart?

You could start in 1990 when he came across a 15-page monograph on Phalke, whose life he thought was “full of twists and turns”. “I said to myself, ‘This has the potential for a great script’,” recounts Swaroop. Before long, what began as a potential script idea had turned into a lifelong project.

Before he stumbled upon the monograph, he knew precious little about Phalke. Born in Trimbakeshwar in 1870, Dhundiraj Govind or Dadasaheb Phalke was raised in an orthodox Maharashtrian household. Abandoning his family profession of priesthood, Phalke sold his wife’s ornaments, pledged his life insurance policies, and, in 1913, created history by directing Raja Harishchandra, commonly acknowledged as India’s first film.

A Renaissance man, he was an artist, photographer, draughtsman, magician, printmaker, writer and filmmaker.

Describing him as blessed with the “Lumière brothers’ realism and Georges Méliès’ illusion and trickery”, Swaroop says Phalke was not only an architect of Indian cinema but also a magnificent storyteller. “Phalke took mythological characters but he treated them with humanism, giving them ordinary character.” Under the auspices of magician Carl Hertz, Phalke picked up illusion tricks that helped him master special effects. Swaroop says, “There is a scene in Kaliya Mardan (1919)”—his favourite Phalke film—“of Krishna’s encounter with kaliya, the snake. It’s remarkable how he achieved the visual effects, simply by covering one half of the frame with a black cloth.”

Phalke used cinema to make political statements. “If Tilak encouraged the swadeshi movement politically, Phalke pushed it through cinema. His idea was to create fully home-grown images. In fact, there was an image war going on between the West and him, in the sense that if they were printing 1,000 copies of [the] Bible, he would counter it by publishing 2,000 copies of [the] Bhagavad Gita.” Though he lauds Paresh Mokashi’s Harishchandrachi Factory, a 2009 Marathi period drama depicting the adventure behind Phalke’s first film, for being entertaining, Swaroop says it cannot be seen as an assessment of Phalke’s life. “It dealt with only a small part of his life.”

Swaroop sympathises far more with Phalke’s later years. While Harishchandrachi Factory portrays the young Phalke as a man with a sense of humour, in his old age he was morose and grumpy. He died at 73. “He became a megalomaniac,” Swaroop says. An anecdote from 1936, when Phalke went to Kolhapur at the invitation of the Maharaja of Kolhapur and decided to make a film, Gangavataran, about the river Ganga’s descent to earth, is particularly telling. “It was too expensive to shoot in the Himalayas. So how do you transport the snow-clad Himalayas to Kolhapur? He painted the whole mountain range white. Everybody said he had lost it.” Unfortunately, all the effort went waste as the paint washed away in the rain.

In many ways, Phalke’s life, though eventful, was a nightmare for his biographer—full of professional courage and exciting travels but also of personal tragedies such as the death of his first wife and child in Godhra in 1898, and his temporary loss of vision in 1912. Swaroop found a way to simplify his research: “I drew a timeline of his life and started studying one year at a time. Once the grid was created, things started falling into place.”

To access rare material, he met Phalke’s family members and visited all the towns in which Phalke had lived and worked, including Godhra, Trimbakeshwar, Baroda, Bombay and Pune. “There were 165 characters in his life, including his wife and eight children. In order to know him better, I had to know the lives of those 165 characters.” When Swaroop began, there was no internet. He had to do things manually, relying upon the “old scrapbook method of cut-and-paste”.

Most researchers find paucity of funds a major stumbling block. Swaroop was no different. He had to rely on the occasional grant. And when he failed to obtain funds, he expended personal money. “Here’s how it works: if you earn a few bucks, you can plough it back into the research,” he says. Swaroop says the Film and Television Institute of India (FTII), Pune, from where he graduated in 1974, prepared him for a life of frugality. “When we decided to enter films,” he says, “we were not thinking about money because we knew that coming into this field was itself an act of suicide. We were quite used to financial insecurities and uncertainties.”

After 23 years of living Phalke’s life, Swaroop’s devotion to him has diminished somewhat. He hints at perhaps coming to the end of his Phalke journey. In the works now is another project. This time, his subject is the 1920s filmmaker Baburao Painter, whom Swaroop regards as India’s first auteur. “Phalke was a technocrat, even a trickster, but Painter was a traditional craftsman. Painter created other filmmakers like V Shantaram and Fateh Lal Damle, and his influence over South Indian cinema is unmistakable.”

At some point in their careers, Phalke and Painter, who was 20 years younger and once a distributor of Phalke’s films, became professional rivals. “When Phalke emphasised making swadeshi films, Baburao said, ‘There is no way you can make authentic swadeshi films because your camera is imported.’ So he developed his own indigenous camera,” says Swaroop.

Swaroop started out in the 1980s, collaborating with avant-garde filmmakers Saeed Akhtar Mirza and Mani Kaul. In 1988, he made Om-Dar-Ba-Dar, his only film to date, which has placed him in the ‘one-film wonder’ category.

The film, which was never released and wasn’t seen or heard of until a screening at the British Council in Mumbai in 2004 sparked fresh interest in it, has acquired a cult following since. That 16-mm print was subsequently lost. Fortunately, noted film archivist PK Nair commissioned another print to be developed from the negative at his personal expense. Eventually, Om-Dar-Ba-Dar landed where all ignored classics inevitably do—the internet.

Swaroop’s reputation and legacy rest entirely on his one film. A Dadaist take on the futility of conventional values, it is a film of many ‘firsts’. It has been called India’s first surrealist film, was the first Hindi film to experiment with non-sequitur dialogue and with lyrics as quirky as ‘Bablu babylon se, Babli telephone se’, and featured the industry’s first on-screen frog hunt.

Narrated in a non-linear style, Om-Dar-Ba-Dar is set in Ajmer and revolves around an adolescent named Om. His father (Babuji) is a retired government servant-cum-astrologer. His sister, the first of India’s sexually liberated heroines, is an oddball who watches movies in seedy local theatres with predominantly male audiences. One day, Babuji’s client, a local businessman fearing an approaching war, hands him some diamonds to hide. Babuji stashes them in the sole of his shoe, which Om inadvertently wears and scoots off. Some of the gems slip out on the businessman’s land and are swallowed by frogs, which then show up at a biology lab in a girls’ school. When the businessman returns to claim the diamonds, Babuji convinces him they were crushed and fed to him, and advises that he defecate on his land to retrieve them. Meanwhile, Om becomes a media sensation at Pushkar for a breath-holding stunt, and the schoolgirls discover the diamonds during a biology practical, prompting a frog hunt. In the end, Om’s sister is shown pregnant with her boyfriend’s child. They decide to commit suicide, but not before finding out what KCN (potassium cyanide) tastes like. The boy consumes it and utters, ‘gobar’ (‘cow dung’). Better sense prevailing, the girl abandons the idea of suicide. This sense of irreverence defines Om-Dar-Ba-Dar. Movie geeks suggest that ‘gobar’ alludes to the belief that life is without meaning.

It is said that Swaroop still gets fan mail with the subject line, ‘Sir, I loved Om-Dar-Ba-Dar’. But Swaroop himself is uncomfortable talking about the film. It almost seems as if it has done him more harm than good—his Citizen Kane, marking him for life.

One avid blogger has called the film a ‘satirical representation of Indian life as a whole’. But Swaroop doesn’t quite agree, insisting that one must not read meanings where none exist. “Satire is a low art form. In satire, you ridicule, but in Om-Dar-Ba-Dar there is a balance between ridicule and [the] sublime.”

Swaroop is also aware that some of the ideas and meanings expressed in the film remain abstract to most viewers. “It was conscious,” he says of the film’s esoteric nature. “We wanted to get the audience in and then lock the door from outside. This was done to give them what we wanted to give them, not what they wanted to be served. People said, ‘Some things don’t make sense.’ But the moment anything makes sense, it’s a dead thing.”

The frog hunt is one of his favourite sections of the film. It was inspired by an old Rajasthani dictum: Heh mhaari leend hai (‘land is my shit’). “Leend is goat’s shit. In Hindi, you call it lenda,” he explains. In Swaroop’s words, Om-Dar-Ba-Dar combines two of his lifelong preoccupations: “science and mythology”.

Among those greatly influenced by this cult film are Anurag Kashyap and Piyush Mishra. There are echoes of Om-Dar-Ba-Dar in Dev.D, Gulaal and Gangs of Wasseypur, particularly in their sense of music and dialogue. Swaroop sees this more as homage than influence. Personally, he enjoys Kashyap’s films, especially their stylistic treatment. “There is something about them,” he says, but is also quick to point out that Kashyap is his very antithesis—more “organised, comprehensible and media-savvy” than he ever was. “Also,” he says, “I wasn’t a full-time filmmaker like him. I was competing with painters and authors.

I never wanted to belong to the film culture, whereas Anurag seems perfectly at home here.”

Swaroop doesn’t regret not having made more films. Though he feels vindicated at Om-Dar-Ba-Dar’s fanzine-fuelled second life, he isn’t entirely stunned or surprised. “I knew it,” he says. “I knew it has value.”