It is possible that a good percentage of the budget of this film was apportioned under the head, ‘wilful destruction of props’ 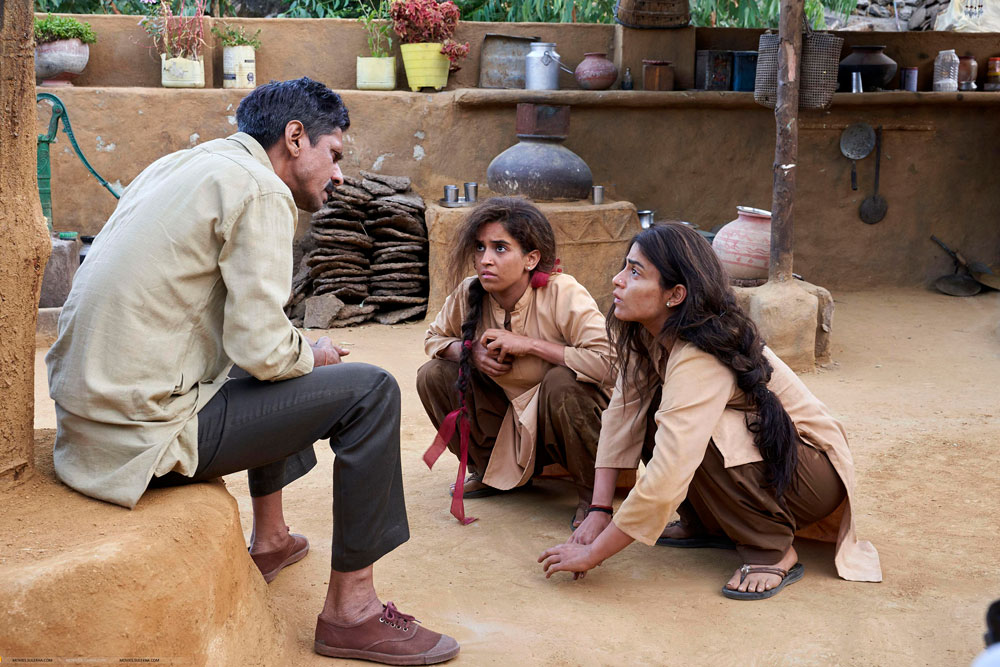 Based on a short story called ‘Do Behnein’ by Charan Singh Pathik, the film uses the metaphor of squabbling sisters to describe the endless conflict between India and Pakistan. This is a bit thick as a political analogy, but director Vishal Bhardwaj is gung ho about the idea, and gives us full blooded sibling battles in small town Rajasthan, complete with fisticuffs, tearing of hair, flinging of utensils, smashing of smart phones and short circuiting of wide-screen TV sets. It is possible that a good percentage of the budget of this film was apportioned under the head, ‘wilful destruction of props’. The mise-en-scene instruction could be of only two kinds – before fight, neat and clean; after fight, total mess.

Atal Bihari Vajpayee’s famous aphorism about the India-Pakistan binary is quoted: ‘you can change your friends, but not your neighbours’. For some inexplicable reason, the sisters hate each others guts and though they live under the same roof with their widower father (Vijay Raaz) they are yearning to be free. Perhaps to solve his problem of having to constantly separate the combatants, Dad arranges the marriage of the older one, Badki (Radhika Madan) to a total sleazeball (Saanand Verma), but she elopes with her lover before the marriage, leaving the sleazeball delighted, because now he can take a shot at the younger sister, Chhutki (Sanya Malhotra), whom he preferred anyway.

But destiny plays tricks, like with the twins India and Pakistan, and the sisters soon find out that they are married to two brothers, and will have to live in a single home once again. They will be in the same space and be needled by the same old issues that dogged their relationship. Years pass, they grow old and cantankerous, but, lo and behold, one day their professional aptitudes are matched with appropriate results, and one becomes the school teacher she always wanted to be, while the other has the dairy business she once dreamt of.

But success has its flip side. Seeing each other happy is abhorrent, and hatred wins again, setting off a new age of conflict, with new weaponry and smarter technology. This time round, psychological warfare is included in the armoury of the sisters, and self inflicted wounds serve a devious purpose. Unfortunately, the plot of ‘Pataakha’ has already exhausted itself by this time, and what we are left with is a damp squib.

Bhardwaj is a director who is safest in the bosom of William Shakespeare, in whose close embrace it seems he can make no wrong film. Shakespeare used comedies, tragedies, histories and romances, late and early, to disguise a liberal ideology with centre-left politics. The seemingly obtuse philosophical meandering in his plays convinced his patrons and his monarchs that he was always on their side of the debate. A similar nation state in India, with room for a myriad political innuendos to co-exist, allows Bhardwaj a lot of freedom in his Shakespeare adaptations. Most importantly, there are full fledged plots to interpret, instead of half baked ones like in ‘Pataakha’. Plus, there are 34 more plays he can still work on.