Pankaj Tripathi is inspired by the beauty of everydayness 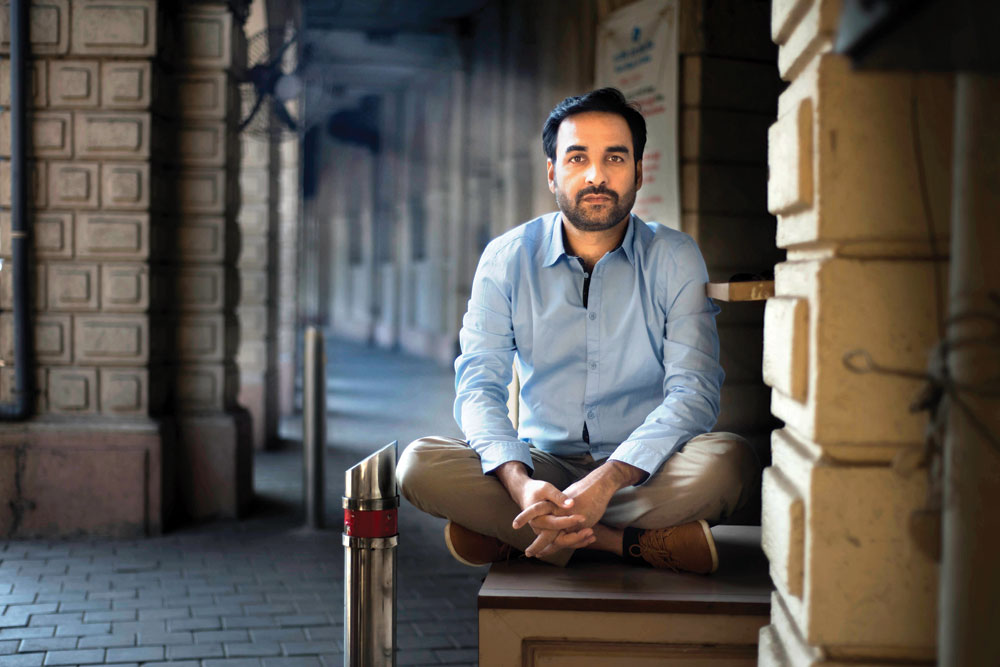 
AS A YOUNG 15-year-old boy following the footsteps of his pandit father, Pankaj Tripathi once conducted a pooja 20km from his village in Bihar. It was a simple ceremony after which Tripathi asked for his dakshina from the owners of the house. They refused to pay him since he was just a child, but offered him a lifetime of free tickets at the three cinema halls they owned. He confesses that he didn’t end up watching a single film, as it was far from home, but looking back he believes that might have ignited his relationship with movies.

Over the last decade, Tripathi has been hailed for his realistic performances. He has given flesh and blood to fierce and flawed characters. Sticking to Hindi throughout our interview, he says, “When you put it like that I feel like I’ve done a lot, but the fact is that I feel like I’ve hardly begun.”

Dressed in a simple white shirt and black pants, Tripathi greets you like he’s one of you. With hands folded and a smile on his face, there’s little about his physical demeanor that suggests his acclaim. He speaks about how he made dinner for his family the previous night, with as much passion as he delivers a performance. His answers are often philosophical, he relies on Hindi proverbs to explain his perspective, and translates it, if required. “Fame wasn’t part of our dictionary, when we were growing up. It wasn’t a dream or an ambition. As children we used to dream about a road being built to connect our village to the nearest town or how to swim like the fish in the river, which ran behind my house. So this sudden attention is new for me. There was a time I’d wait for my phone to ring after auditions, but now it rings so much I have to keep it away sometimes,” he says.

Tripathi has had seven releases this year spanning films and web shows, including the recently released second season of Sacred Games. Today he has at least a dozen scripts to choose from, and he’s grateful for it. From playing the spiritually menacing Guruji in Sacred Games (that made him a household name) to the matter-of-fact funny novelist Rudra in Stree, Tripathi’s characters have been both universal and unique, often spouting life lessons to his audience. “I don’t know how it happens but my characters usually end up making a larger point about the gravity of life. Today I am expected to give my opinion on everything from Bihar floods to attacks in Kashmir, but I choose my words wisely. Be it in life, or as a character, I really believe it’s the social awareness that I generate as a person that reflects in everything I do, and as a performer if I can create a change in the minds of people for the better, why not. The Bhagavad Gita says, ‘If you look within yourself you will find the entire universe.’ I will never stop that process of learning, and I hope that keeps my characters alive even after I’ve passed on.”

His humility is surreal, but for those who have observed his work closely, it wouldn’t come as a surprise. From the butcher Sultan in Gangs of Wasseypur (2012) who talks about tearing the flesh of his enemies with a smile, to railway ticket collector Sadhya Ji in Masaan (2015) who finds meaning in the most mundane everyday life, to police officer Aatma Singh in Newton (2017) who is arrogant but not oblivious to the ongoing turmoil—Tripathi has embodied each of his characters with empathy and humanity. He could be playing a gangster or a government servant, but there is a stillness he brings to both. “I often feel like if a job can be done easily without aggression, why waste energy? One of my acting gurus would say, ‘through minimum create maximum.’ Do small things, but the impact of it has to be large. How predictable would it be if my character in Mirzapur was a loudmouth who terrorises the whole city? The fact that he orders murders almost as simply as someone asking for an extra roti during dinner makes it scary, and impactful for anyone watching him,” he says.


“As children we used to dream about a road being built to our village to the nearest town, so this sudden attention is new for us,” says Pankaj Tripathi, actor

MUCH LIKE HIS colleague and senior Sanjay Mishra, Tripathi recognises the pulse of his characters and embodies their strengths and weaknesses. It’s neither the length of the role nor the strength of the character that makes him stand apart in a film, but the little things he does in every scene. “Every man becomes who he is due to a past that lies behind him,” he says. And the impressions of that past, and the society they belong to are always very alive in Tripathi’s characters. Watch him blissfully eat a bowl of kheer sitting on a bench at a railway station in Masaan, and as a viewer you almost taste the kheer yourself.

“People who work every day of their lives, silently and honestly, inspire me. They have a world of their own that we don’t get to see often. Away from the limelight, they are happy in their own little world. They are content with small joys of life too. This railway ticket collector is among those commoners that no one really notices but is so essential to everyday functioning of our lives. I love playing such characters. It’s a challenge to bring attention to them, given how oblivious people are to them,” he says.

His connection with the everyday reality of life stems from his modest childhood in a farmer’s family in Bihar. His village in Gopalganj district didn’t have electricity or motorable roads, till around five years back. The song of birds at dawn and the murmur of the river by dusk are sounds that live with him even today. The youngest of five siblings, he helped his father in farm work, but always dreamed of doing something beyond his comfort zone. His home didn’t have a TV till recently. He’d play the role of a girl in the village plays, much to the enjoyment of the audience. At the age of 14, he decided that he would only marry for love, and wouldn’t accept dowry.

“My father always told me that I should never take credit for something that isn’t mine, and always think of giving back no matter how little I had. All his life he has been a very religious and righteous man, but when I told him that I was interested in acting, he didn’t object. All he asked was if I would earn enough to sustain myself. When I go home today he asks me how much the flight tickets cost. That’s how simple my family is. Hum aaj tak kabhi gale nahi mile hein (We have never hugged to date), but he knows that I’m doing good work,” he says. “My connection with my village is still very much alive, but today when I go back I see how much things have changed, including me. I meet my old friends and realise that I live a very different life now.”

“I often feel like if a job can be done easily without aggression, why waste energy? Do small things, but the impact of it has to be large,” says Pankaj Tripathi, actor

After high school, Tripathi moved to Patna for college where he did theatre, and worked at a hotel to sustain himself. For five years he worked part time and honed his craft as a performer on stage. He calls himself a politically and socially aware artist, and few know that as a young boy his feisty opinions landed him in jail. “There’s a saying in Hindi, ‘Jaake paanv na fati biwai, woh kya jaane peer parai’. It means, ‘how will you know the pain of another person, unless you have experienced it yourself,’” he says. At a students’ movement in Patna, Tripathi was picked up with others during a protest and spent the next seven days in prison. The isolation made him discover himself as a person, and an artist. He says, “My perspective towards acting broadened and I started looking at stories and my characters as a whole, rather than isolated people on a few pages in a script. That’s when I began to empathise with them.”

After studying at National School of Drama (NSD), Delhi, it took Tripathi over a decade to bag a substantial role in a film in Mumbai. His wife Mridula who worked as a teacher kept the household running. “When I moved to Mumbai, all I thought was I needed to keep doing small roles and pay my rent. I’d stand in audition lines, wait to be rejected, only to come back the next day and knock on the same doors. I remember it was when Satya (1998) released and Ram Gopal Varma became the god of Hindi films, especially for actors like me who now felt they could fit into real parts. He was the only director casting for such roles, and almost 200-250 of us would wait in line outside his office for our turn,” he says. Clearly, it seems his time has come.