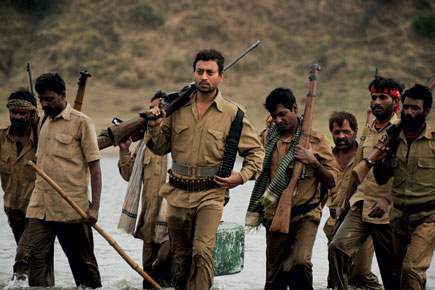 
A film about State apathy that has no laughs, sketches just a few romantic scenes  between husband and shy wife, and does not exploit violence for its own sake, is not likely to grip a demanding audience. But Paan Singh Tomar is an unusual work, one which takes you into uncharted territory and surprises you with the depth of emotion it generates of a forgotten man.

In a sense, the film is a well-crafted obituary on an outstanding athlete who joined the Indian armed forces shortly after Independence,  and whose achievements in a difficult event (Tomar won the national championship in steeplechase 7 years in a row) were largely ignored during his service career, but, in a revision triggered by media focus on his dramatic later life, now needs to be highlighted.

The bitter irony of this film obit is that it is written some 30 years after Tomar died an enemy of the State, the State that he served with such devotion and distinction. The heartbreak is that it need never have been that way.  When the soldier and sportsman took premature retirement from the Army and went back to his village in the ‘Chambal Valley’—bandit territory—he was hounded by land disputes that turned ferociously ugly, and was forced to take up arms, form a gang and become a baaghi  (rebel) himself.

Irrfan Khan’s performance as Paan Singh Tomar presents us with an actor extracting creative energy from sources he hasn’t even fully tapped yet. He plays a driven and expressive man who is convinced of the righteousness of his crusade,  but who doesn’t let that conviction take away his equanimity or sense of humour.
Director Tigmanshu Dhulia uses two separate and distinctive styles to construct his film.  One is the ‘docu-drama’ to detail Tomar’s athletic career, and the other is the narrative of fiction; as if to say that this story is now part history and part mythology.  In all, an absorbing cinematic experience.