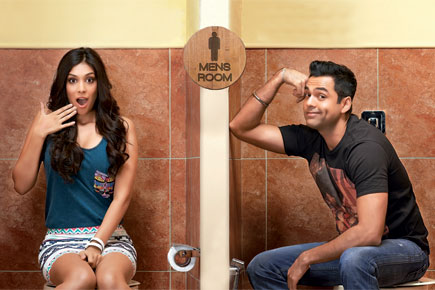 Amit Sharma is a boring guy with a boring name who, on a date, predictably and unfailingly, orders Manchow soup, ‘one by two’. It’s one of the reasons his ex dumped him. Writer and Director Devika Bhagat takes this character and designs a script for him, formatting it so that Amit (Abhay Deol) meets the leading lady, Samara (Preeti Desai), only in the last scene. Then the camera tilts up to the moon—“Que sera sera, whatever will be will be. The future’s not ours to see”.

Great, it’s a decent movie idea, but the trouble is that this future is ours to see from about a mile away. The graph of the story has several near misses. Amit and Samara are both South Mumbai types living on the most expensive real estate, hanging out in the same bars and rocking to the same terrible music. He fiddles with computers for a living, but composes and sings for his soul.

She is a dancer and lives with her single mother. They are bound to meet at some point and their paths intersect on at least three points in the graph, yet they pass their eventual destinies by like ships in a fog.

Meanwhile, they lead their ordinary lives, and this is the dragnet of the movie. All the characterisations, performances and scenarios are extraordinarily dull, and we are left tapping our knees and waiting for the deus ex machina. For an actor who has staked out a career and a reputation for doing offbeat roles and executing them inventively, the decision to do this film must surely have been a moment of madness for Abhay Deol.

Just one scene redeems him with his lady fans—when he rocks in his boxer shorts to put off the older generation. The rest of the time, he tries desperately to look like the boy next door, a role which, at age 37, he should know better than to attempt.