The void after my friend Om 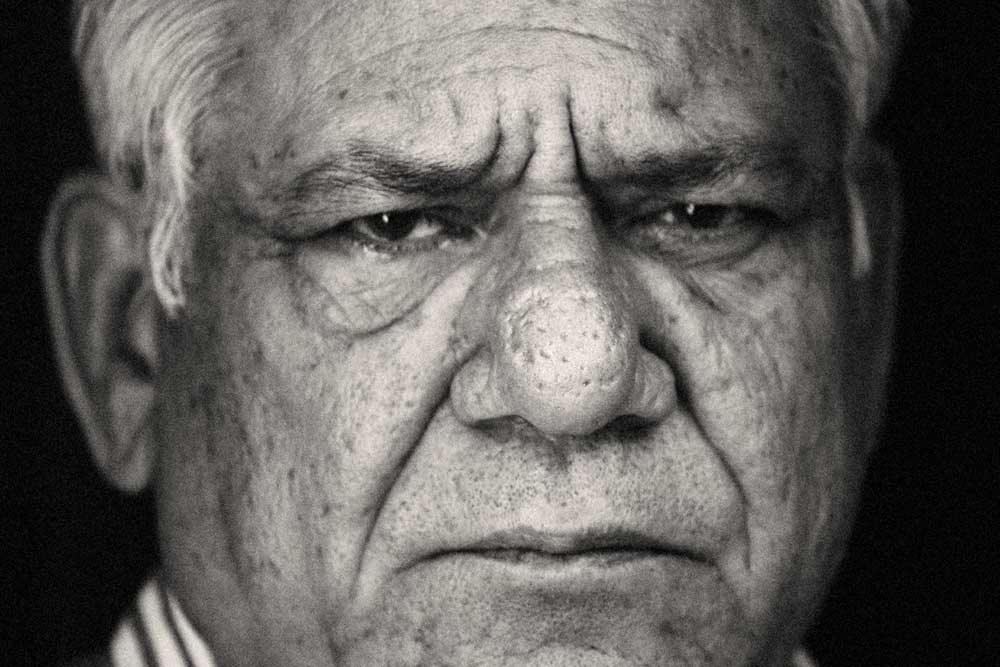 THE FIRST TIME Om Puri walked into my office, it was after he had passed out of both the National School of Drama (NSD) and subsequently the Film Institute in Pune (FTII), and was looking for work, sometime in 1976. Girish Karnad, who was then the director of FTII, told me that there were two wonderful actors, Naseeruddin Shah and Om Puri, who had passed out of the Institute and asked if I would like to meet them. That’s how I got to know both of them. I remember a skinny boy wearing a loose white kurta and pants, and with a very pleasant smile. But when he started speaking, it was like his voice had engulfed the entire room. He commanded so much presence because of his voice, I was speechless.

I was making my third feature film Nishant (1975) at that time. I couldn’t work with Om in that one, but we went on to make a few docu-dramas together about the new state of Haryana that had just split from Punjab. It wasn’t too easy to get work at that point, and many of these boys who had passed out of film school would put up at scriptwriter Chinna Burra’s Ganga Vihar apartment on Marine Drive. Om, Naseer, Kulbhushan Kharbanda and many popular actors started their careers from that apartment, mostly because it was rent-free and it had a fine view of the sea.

Om’s biggest strength was that he was never doubtful about his ability to get work. I remember him sharing stories of the days he grew up in a small town, Ambala in Punjab, in a small house, and how he had to start working very early to support his family. He came from an economically deprived background and had great difficulties as a child in his growing up years. He would always go back to his childhood as an experience—it made him so strong, that nothing could bog him down. Probably that is why he was one young actor who was so confident of his skills that anyone would want to work with him. When he agreed to play a tiny walk-in part of a filmmaker in my film Bhumika (1977), he never asked me what the length of the role would be or how many scenes he would have in the film. He never thought any role was too small for him. Even the most insignificant kind of role he would make significant. In that sense, he was a thorough professional.

I didn’t immediately get an opportunity to put him in a much bigger part, but when I did, it was with films like Kalyug (1981) and Arohan (1983). He must have been the only actor in his time to win a National Award that early in his career for the farmer’s part in Aakrosh (1980). To say ‘he was a good actor’ would be stating the obvious, but when I started to work with him, I started to understand how committed he was to his work. He was an ideal actor, capable of steering his performance to multiple levels, depending on the requirement of the scene. On the sets of Aakrosh, we’d be shooting under extreme temperatures and there’d be nothing to really keep the actor comfortable because we were always very low on budgets. Om was the kind of actor who’d never get distracted by that. I remember on the sets of this film Susman (1987), where he played a handloom weaver, we’d be shooting in the interiors of India and Om would often cut his fingers on the thread. There were times he refused to even see a doctor because he wanted to experience the pain a real weaver goes through. That kind of dedication is utterly rare. He was not at all temperamental.

But one of the things I used to get worried about often was how he would get distracted. He would always concern himself with the problems of production, the unit, the costume department, when he should be concerned about his own performance. And I would say, “Please Om, worry about your own part. Everything else will be taken care of.” In that sense, he wasn’t an actor separate from the people who were making his film happen. It showed how unselfish he was. He realised very well that a film is never made by one or two actors, but it’s a collective experience and he respected every crew member present on that set, acknowledging their work at each go. Sometimes he would take it upon himself to help the light boy with the stand or gaffer with the camera. He never really thought of himself as just an actor, and that’s why his performances would shine—especially in films like Mandi (1983), where he played a very light-hearted role of a photographer who’d take dirty pictures. He had an excellent sense of humour and his comic timing would sometimes just stun me. He had a great way of balancing out the idealist and the humorist in him. His personality in real life would never overshadow that of his character on screen because he was able to dissociate himself very well. That’s why he was so versatile, and yet so unique.

HE WAS ALSO coming up at a time when the kind of films being made was a mirror to our social and political scenario. If you know Om, you would know that he was very soft-spoken and graceful, but that didn’t mean he did not have opinions. He may not have been a particularly political person, but he was concerned about society around and the way we were living; he was a thinking person in that sense. He believed in change and the ideas of social justice, and we’d often spend many evenings discussing how cinema could influence this change. It was almost like a banter which went on for the decades of friendship we shared.

We did several films together, but our relationship was never based on whether we were shooting something together or not. It’s a friendship that lasted for almost 40 years. As a human being, Om gave his all in his relationships. He was very honest and generous in his friendships and wouldn’t think twice about helping someone out. There was no conditionality to having him as a friend because he was open and straightforward. Sometimes we’d end up speaking on the phone for hours together every day, almost like a diary entry, sharing our day’s story with each other.

The last I spoke to him was the evening before he died. We had a long conversation for over an hour on the phone. He was telling me how he was about to take off on an international tour for a play. He spoke so much that evening that I begged off and said we’ll speak a little later. Then I thought I was rude and called back and spoke for another 20 minutes or so. Eight hours later, he was no more. For many of us who saw him through his magnificent life and career, it’s going to be difficult imagining a life without Om. Not just as an actor in cinema, but as a friend and well-wisher. There’s nobody like him, and there won’t ever be.