A delightful film falls apart in the second half 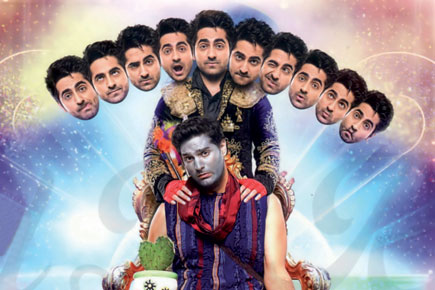 A delightful film falls apart in the second half


This movie unravels in a curious manner—like a student doing excellent work during day school but completely neglecting to do his home-work for the morrow. By the time of its interval, the film has charmed and engaged you. Shortly after, Nautanki Saala! loses the plot.

A good-looking romantic comedy all of a sudden turns into Fannie Mae and Freddie Mac, dramatically in need of a bail-out. The script is from a film called Apres Vous, about a maitre d’ who suffers from what the French call ‘the disease to please’. He rescues a man about to hang himself and then tries to put the poor man’s life in order, complicating his own in the process.

Nautanki Saala! starts off delightfully, with Ram Parmar, RP, at a psychiatrist. In imitation Mandarin, he tells her the old Chinese proverb that if you save a man’s life, you are responsible for him forever. RP (Ayushmann Khurrana) is an actor, and though his name is Ram, he plays Ravan in a theatre rendition of the Ramayana. The mess in his life began, he tells his shrink, after he cast the man he saved (Kunaal Roy Kapur) as Ram.

The film gives you art-directed South Mumbai, removing all social context and replacing it with nouveau Bollywood. This doesn’t bother you as long as the emotional quotient of the narrative remains real. But when the three women in the film, one of them RP’s live-in girlfriend (Gaelyn Mendonca), are turned into props in the studio, things fall apart. They have no roles, literally, and when the two men are just moved around on a chess board, disconnected, as it were, from the women directly concerned, the film loses credibility.

Khurrana, who did such a good job in Vicky Donor, gives it his best shot, but he has little support from the rest of the cast. A very disappointing film by Rohan Sippy.