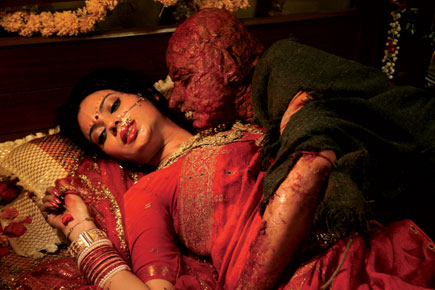 ‘Interpolation’ is a term generally used in mathematics, but in a few movie theatres in Bombay in the 1980s, it was applied to another kind of exercise. It was known, for instance, that at select screens like the Ganga Jamuna Theatre in Tardeo, a ‘Ramsay Brothers’ horror movie would be scheduled, you would watch it for about half an hour, and then, voila, a reel of pornographic clips would be inserted in between.

Miss Lovely opens with a scene like this—a raucous audience waiting for the clips, the projectionist unloading the horror film and Sonu Duggal (Nawazuddin Siddiqui) standing there dutifully with a fresh film can in his hand. It is a masterful period re-creation, shot in ‘noir’ style,set in dilapidated buildings and populated with paunchy middle-aged men and sad looking starlets. It is a merciless look at exploitation in cinema, and is one of the most depressing films you will see.

Brutally honest, it looks at the movie business not as art, but as transaction. Though the subject of Miss Lovely is ‘B’ or ‘C’ grade cinema, there is no mistaking the director’s intent of implying that the same equations apply across the board in Bollywood, even in the so-called A-list films. Towards the end of the film, as the simple-minded Sonu is recovering from his trauma in this industry, the hazy and grainy ‘noir’ look of the lighting lifts, and we see bright sunlight for the first time.

Sonu’s brother, Vicky Duggal (Anil George), is the producer of these films. He is a realist, but has not the slightest idea that his brother is a romantic. This is the hopeless twist in the story—a man with passion and feeling in a world of smut.

He falls in love with an actress called Pinky (Niharika Singh) and it is the saddest, most hopeless love story in the world. The ability of Nawazuddin Siddiqui to inhabit and possess a character so completely is a rare gift. Let us savour this talent.