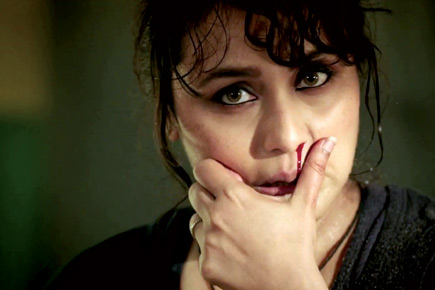 
Searching for a missing person is a great role for a woman with a straight-talking personality and good marksmanship—ergo, Vidya Balan in Kahaani. That movie had holes, but it held you.

Here, in Mardaani, Rani Mukerji is cast in a similar role of a down-to-earth investigating officer and she does her damnedest to make it work, but the sheer obviousness of the plot and the complete absence of even the slightest suspense in what is, essentially, a police thriller, lets her down horribly. To add to that, the movie burdens itself with a faux social conscience and parades as a film that condemns the sexual exploitation of women.

It does this by lining up teenage girls about to be trafficked in the sex trade. The scene looks like a school PT drill. The sex trafficker, an English speaking Hindu College dropout called Walt (Tahir Raj Bhasin), is the drill master, ordering the girls to drop their towels, pronto. After checking out their bods, he grades them suitably, then dresses them up in badly cut mini skirts for auctions at the sex slave market. The whole thing looks like a C-grade Miss Paharganj contest.

Director Pradeep Sarkar should have had better sense than to accept a script like this, and then to shoot it without modification. The thing is that once Crime Branch Inspector Shivani Shivaji Roy (Mukerji) of the Mumbai Police goes to Delhi to investigate the case of the kidnapped girls, the movie is an open-and-shut case. Roy has been talking all this while to ‘Breaking Bad’ Walt on her cellphone (he wants to buy her out), but we already know, from her professional and domestic life, that she is not for sale and she is going to hound him to his den. It’s all a matter of time. So where is the thriller?

Without a single twist in the plot, we watch predictable action unfold. Mardaani is a disappointment.