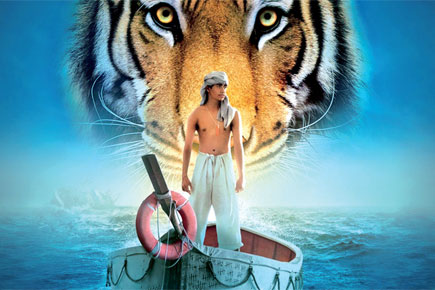 
The number pi, because of its never ending decimal continuity, represents infinity. When Pi Patel is adrift on a lifeboat in the Pacific Ocean, mathematics turns into philosophy, and both novelist and filmmaker would have us believe that the universe, with all its infinite life forms, has a creative ‘oneness’, so to speak.

Prattling on in this fashion, the preachy tone of Life of Pi grates somewhat. This takes something away from the astonishing visualisation of the movie. Ang Lee is a master adaptation artist and can transit centuries and cultures utterly convincingly. He can move with ease from Jane Austen’s England in Sense and Sensibility to the story of a boy who grew up in a zoo in Pondicherry. He can combine traditional narrative with special effects and 3D as naturally as James Cameron does in Titanic and Avatar.

This cinematic fluency is what you admire in the film, because in terms of content, some of novelist Yann Martel’s narrative devices appear derivative. When Pi and Richard Parker, the Bengal tiger, finally drift on to an island full of meerkats and a carnivorous form of algae, it appears a hallucination. Later, when he survives his ordeals, Pi’s story is not believed. Lemuel Gulliver, too, is stranded on strange islands where the natural world is upended in Swift’s great dystopian novel, and he too faces credibility issues when he reaches ‘civilisation’.

Also, the relationship between Pi and Richard Parker, a companionship between boy and tiger that keeps Pi sane during the 227 days he is adrift, is similar to the unlikely castaway friendship between Robinson Crusoe and ‘Friday’ in Defoe’s novel.

In the film, actor Suraj Sharma develops a persona natural both to himself and the boy Pi, managing to convey a physical and psychological transformation very well. As the man Pi, Irrfan Khan is equally good. Overall, a very satisfying cinematic experience.