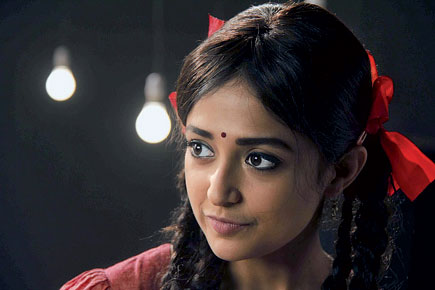 Viewed a film script, this movie shouldn’t work. It is a case study on child prostitution—the purchase of a 14-year-old girl from the countryside and her transfer to a brothel in a city. The slightest melodrama in the process of turning this story into fiction would have ruined it entirely, turning Lakshmi into a didactic film about the first case of child prostitution in Andhra Pradesh in which the perpetrators were actually convicted.

Instead, the story is told from Lakshmi’s point of view—a literal autobiography of an intelligent and brave girl who is never cowed by her horrific circumstances. The director does not add any cinematic devices that take away from her graphic description. The background music is always low key, never intrusive. The villains—the brothel owner, the pimp, the madam—behave like tough individuals making a living, occasionally displaying their human side.

Above all, the sex act is turned into a nightmare—with condoms and creams unable to protect a 14-year- old’s vagina; unable to ease the pain, the soreness and the bleeding caused by seven clients in a row. The child finally loses consciousness.

Then there is the constant washing, the futile attempts to remove the stains. All of this is overlaid with an air of normality, the ‘business-as-usual’ ambience of a friendly whorehouse cleverly disguised as a girl’s hostel.

The film maintains a fine balance between the objective description of child trafficking and prostitution and the subjective perspective of Lakshmi (Monali Thakur). With a fine supporting cast that includes a lawyer recovering from a mental breakdown (Ram Kapoor), an utterly convincing brothel owner (Satish Kaushik) and a despicable pimp (director Nagesh Kukunoor), the film holds you transfixed.

Lakshmi says nothing new, but stuns you into silence with its emotional and intellectual clarity.