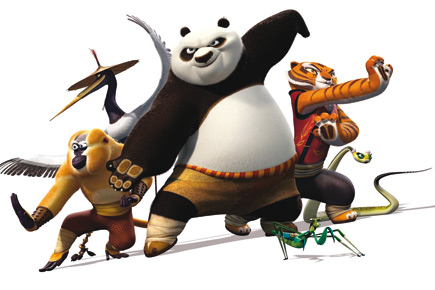 
Gunpowder was one of the four great inventions of China, the others being the compass, paper-making and printing. In Kung Fu Panda 2, the entertaining panda Po ponders the unthinkable, the end of Kung Fu, following the use of cannon fire by the ruler of Gongmen City. When the cannons turn towards the Giant Panda and his Kung Fu master friends, their awesome skill at martial arts comes to naught. The megalomaniacal Lord Shen of the Peacock clan, a clear reference to a dynasty in medieval China, has used the latest technological invention of his nation to throw a challenge to Po, the cuddly king of Kung Fu.

Lord Shen (Gary Oldman) has been paranoid about pandas ever since an oracle predicted that he would be vanquished by a conqueror in black and white. He then ordered the ethnic cleansing of all giant pandas in China, and this holocaust, apparently, is what led to Po (Jack Black) being abandoned as a baby by his parents. He was found crying in a crate of radishes by his adoptive father, Mr Ping (James Hong), a noodle shop-owning goose who is the most endearing character in the movie.

It takes Po a while to realise that he doesn’t quite look like a goose. That is when he has visions of his biological parents and asks Mr Ping the probing and uncomfortable questions about his origin that adopted children sometimes ask. These recurring visions of his babyhood are Po’s Achilles Heel and he is unable to find the ‘inner peace’ that Master Shifu (Dustin Hoffman) recommends.

The story is written with a moral universe beautifully sketched out, but the genius in the concept—a roly-poly, baby faced, naturally masked panda as the exponent of Kung Fu—has started to wear off. With his all-conquering achievements, Po now mirrors the superheroes of animation, something he was not quite designed for.