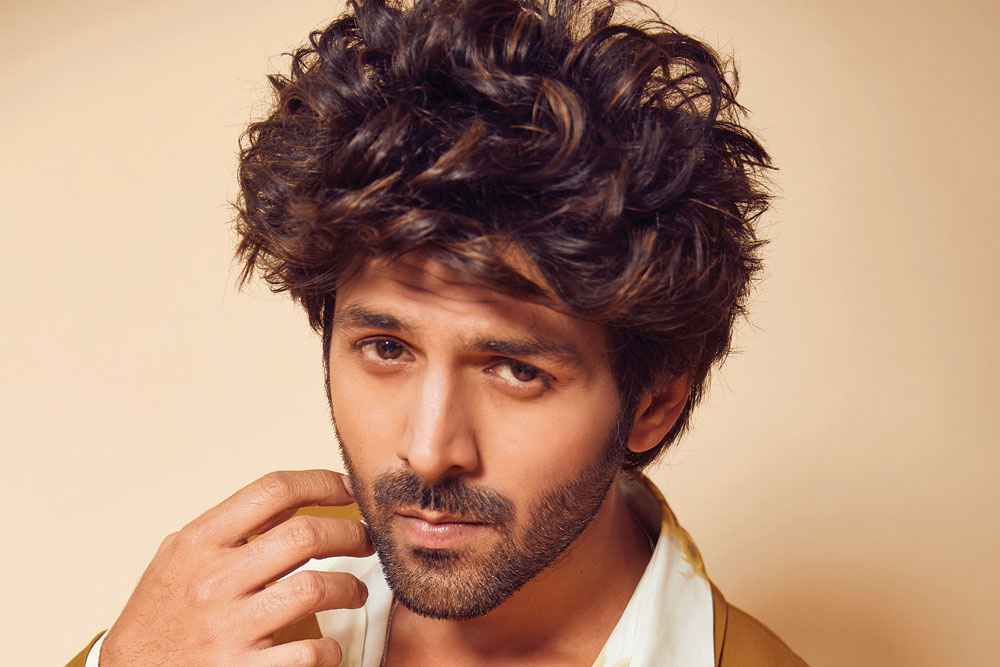 
HE’S IN THE opening scene of Masaba Masaba 2 as a delicious doctor delivering the fashion designer’s dream baby. He features in virtu­ally every conversation of Koffee with Karan, Season Seven, as someone’s ex or someone’s bestie. Here he is celebrating co-star Kiara Advani’s birthday, there he is dancing at a rap party with Kriti Sanon. He’s been in the film industry for 11 years, but Kartik Aaryan has finally become a force to reckon with. His Bhool Bhulai­yaa 2 was one of the bright spots in a hit-starved Bollywood of 2022, making ₹ 250 crore at the box office. And he is a favourite of the paparazzi, who seem to follow all his moves, whether it is eating Chinese food by his Lam­borghini or taking selfies with fans.

So, is the 31-year-old engineering graduate from DY Patil Engineering College in Navi Mumbai an overnight success? Not quite. The Gwalior-born and raised boy who went to St Paul’s School gave several auditions while studying for his engineering degree and living with 11 boys in one flat. The role he finally bagged was in Luv Ranjan’s bromance Pyaar ka Punchnama (2011). Like a good middle-class boy, he did complete his education. “I still remember taking the final exam after Pyaar ka Punchnama had released and my fellow students were taking selfies with me,” he says.

But the success didn’t register with the industry star-makers, despite his Pyaar ka Punchnama and Pyaar ka Punchnama 2 monologues about the problems of having a girlfriend becom­ing memes. “People didn’t know my name. They just knew me as the guy who said those dialogues,” he says now.

Kartik’s character in Pati Patni aur Woh is from Lucknow but he may as well be from Gwalior. “I speak like that because I am from Gwalior. That’s the relatability factor,” says Kartik, playing with his dog Katori, while eating a sandwich after a hard day’s work. And that is where he scores. Authenticity is a big winner in storytell­ing today, as is conviction. One of the first things Kartik did when he became successful after his breakout film Sonu ke Titu ki Sweety made over ₹100 crore in 2018 was to call his parents and sister to Mumbai. His parents, doctors in Gwalior, uprooted themselves and now live with their son, while his sister studies medicine, carrying on the fam­ily tradition. “Growing up, I saw my parents working tirelessly. We always had some loan or the other that we were paying. But I saw their passion for their profession and their belief that work is worship,” says the actor who has also done a diploma in acting at Mumbai’s Kreating Charakters.


“I give 200 per cent to every film. I think only about my work. I’ve become an insomniac,” says Kartik Aaryan, actor

It’s that middle-class ethic that audi­ences relate to. “I always had an acting ka keeda (desire to act),” he says, explaining why he had to leave Gwalior. “Every­thing there was limited, it was a limited quality of life, limited income. That’s when I started applying to colleges in Mumbai.” Engineering at DY Patil Engineering College was a way to get out and he spent three years travelling in local trains, doing auditions, studying. It was only when he got the Pyaar ka Punchnama role that he told his parents that he had an acting job. “I remember I was at Andheri station, and I had the contract in my hand. My mother and aunt took the first flight to Mumbai and went to the production house to check whether it was true,” he adds.

Add to this solid support is his obvi­ous desire to be loved, even if it has had some hiccups. When he quit Dharma Produc­tions’ Dostana 2 after the first schedule, he knew he would be angering the un­crowned king of Bollywood producers, Karan Johar. Indeed, his departure from the movie was announced with a terse statement from Dharma Productions, noting his “unprofessionalism”. Doomsday for a young actor in the industry? Not for Kartik, whose Bhool Bhulaiyaa 2 has made him an unques­tionable superstar.

It’s been a steady climb. Sonu ke Titu ki Sweety, made with director Luv Ranjan, made him a breakout star. “Suddenly everyone in the industry noticed me,” says Kartik, who followed with social rom coms Luka Chuppi and Pati Patni aur Woh in 2019. Love Aaj Kal 2 tanked com­mercially and critically. Director Ram Madhvani cast him as an ambitious TV reporter who uses a city tragedy to ramp up TRPs in Dhamaka (2021), which premiered on Netflix. Bhool Bhulaiyaa 2 confirmed his status as the hot new thing; with both Ranveer Singh and Ranbir Kapoor, who are the reigning young deities, struggling with their movies. Actors Ayushmann Khurrana and Vicky Kaushal strike a careful bal­ance between commercial movies and prestige projects and move in a different orbit. Varun Dhawan is well liked and while his latest Jugjugg Jeeyo did well, it fell short of Bhool Bhulaiyaa 2.

HE NEXT TWO years look solid too for Kartik. He has Shashanka Ghosh’s Freddy; Shehzada, a remake of Allu Arjun’s hit Ala Vaikunthapurramuloo; and films with Kabir Khan and Hansal Mehta coming up. He says he loves his job. “I give 200 per cent to every film. I think only about my work. I’ve become an insomniac,” he adds. He loves every aspect of the job, whether it is posing for the paparazzi or posting on Instagram. “They get money for every picture they click. You have to respect their work,” he says. “Equally I post on Instagram myself. I don’t have a team. This is me being who I am. I’m switched on always.”

His college friends keep him grounded, as they travel and spend time together. “They’re not from the industry. They’re the guys I used to borrow money for sandwiches and coffee from.” No danger of that happening now.