But for the sumptuous cooking and fine acting by Meryl Streep, this film is a little too cute for comfort. 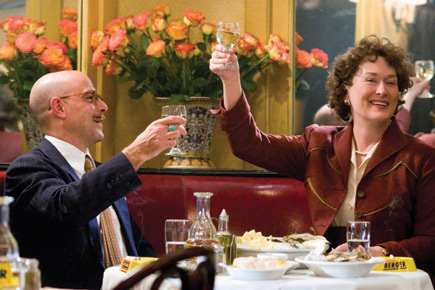 But for the sumptuous cooking and fine acting by Meryl Streep, this film is a little too cute for comfort.


The odd thing is that though this is a movie about French cooking and half of it is set in Paris of the 1950s, there is noth­ing French about Julie and Julia. It is a quintes­sentially American film about food as a busi­ness enterprise; about how publishing and TV can take something exotic, as French cuisine was to the Anglo-Saxon palate then, turn it into culture and make a neat profit from it.

Julia Child was the middle-aged wife of an American Embassy official in Paris when she learnt about French cooking. With the help of two local collaborators, she put togeth­er a book of recipes adapted to the US kitch­en called Mastering the Art of French Cooking (1961). It’s never been out of print.

Meryl Streep plays Julia with a distinct manner of speech, walk and personality. As a performance it is won­derfully crafted, but as biography it does turn Child into an eccentric housewife of the 1950s who got lucky with her husband’s posting to France, some very helpful friends in the right places, a US publisher who just loved her rec­ipes and a very supportive husband. But you have to ask the question—is the portrayal of a lovable, hare-brained woman consistent with a character who must have had great talent, drive and a hard-nosed business instinct?

Writer and director Nora Ephron also has a parallel contemporary story woven into her plot. Apparently, in the early 2000s, a wom­an called Julie Powell (played here by Amy Adams) started cooking all the 500-plus recipes in the Child book, wrote a blog about it and, voila, turned her culinary experiences into yet another book. But it is all too cute for comfort.

The best part of the film, though, is the cook­ing. French food may be a little fussy for some, but the sauces and the meats, how to stuff a duck, to open a fish, to add cream and choc­olate to dessert, all this makes your mouth water. Bon appetit!