The film is utter social and political fantasy, and is not meant to be taken seriously 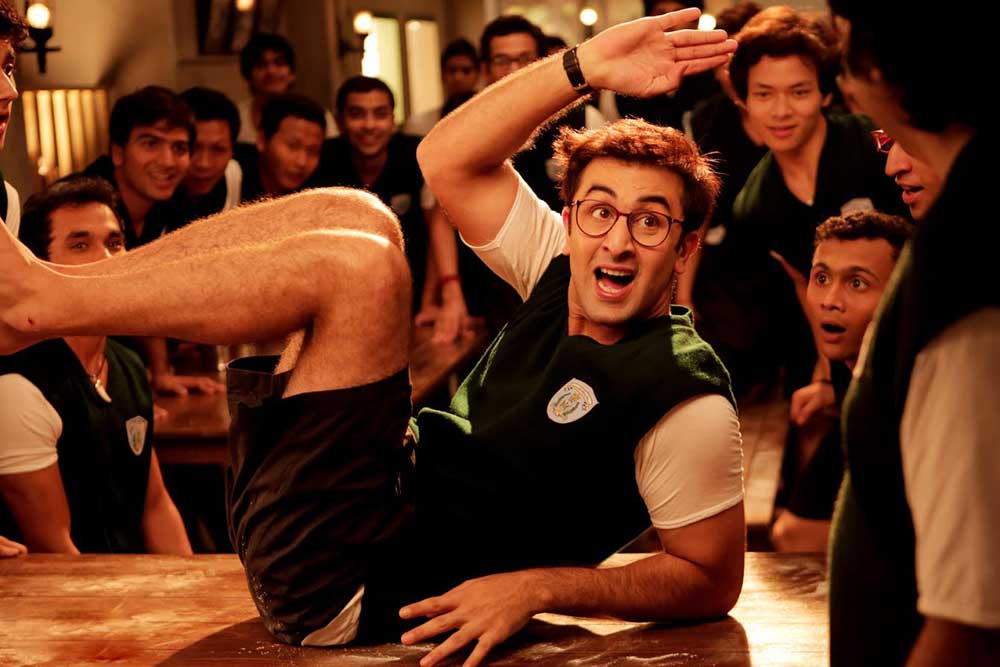 Anurag Basu’s latest offering is a pastiche of vaguely familiar ideas from popular Western literature, comic strips and films. The hero is a stuttering and singing detective (he stammers from the left side of his brain and sings from his right). We are expected to believe that this sleuth is a schoolboy (34 year old Ranbir Kapoor) who was once admitted to a boarding school by his nomadic father, and has remained there ever since, solving mysteries with the help of his friends.

Sporting a hairstyle that is reminiscent of both Tintin in his adventures and Jim Carrey in his ‘Ace Ventura’ films, Ranbir is frenetic in his impersonation of ‘Jagga Jasoos’, the problem solver of India’s most complex cases on international arms transfers. The ‘Purulia Arms Drop’ case is referred to often enough, and the idea in the film is that since arms sales and smuggling is the most lucrative business in the world, the international community encourages a state of perpetual border skirmishes and never ending ideological and nationalistic wars across the world to keep the trade going, which, in turn, makes multi-millionaires of all the businessmen and corporations involved.

So from arms deals in Myanmar that stoke the insurgency in Manipur, to international rackets in Africa that keep tribal attrition going, the movie assiduously covers hot spots in the world. Along the way, Jagga adds a partner for his detective work, a journalist called Shruti (Katrina Kaif), who is a cute but klutzy investigator. He claims that she is a carbon copy of his father (Saswata Chatterjee), who, apparently, was unlucky with any act that required physical co-ordination. He says the comparison is meant as a compliment, because Shruti has two left feet and falls down staircases that are accident proof for normally functional people. But together, they are a team, and go on to expose the biggest arms dealers in the world.

In respect to these conspiracies, the film is utter social and political fantasy, and is not meant to be taken seriously. Where it is interesting, however, is in the invention of a niche genre of the musical. Since Jagga is incoherent in speech, he can only have conversations by singing his lines. This procedure could have easily become repetitive and tiresome. The film avoids this pitfall by picking up folk tunes and ethnic cultures from wherever Jagga and Shruti travel, and by weaving them into the music, to add variation to the way the lines are sung.

The result is a very colorful and vibrant movie in terms of its sound and visual design. Where the film falls short is in the oversimplified plot that runs riot over the second half of the film. Repeatedly, our ‘Jasoos’ duo escape from life threatening situations by the skin of their teeth, like the legendary Houdini. Overstretched at nearly three hours, by the end of it all you feel you have had enough of Ranbir’s speech impediments and Katrina’s clumsiness.