Jackie Shroff is holding on to those precious moments that life as an actor has to offer. The actor in conversation with Divya Unny 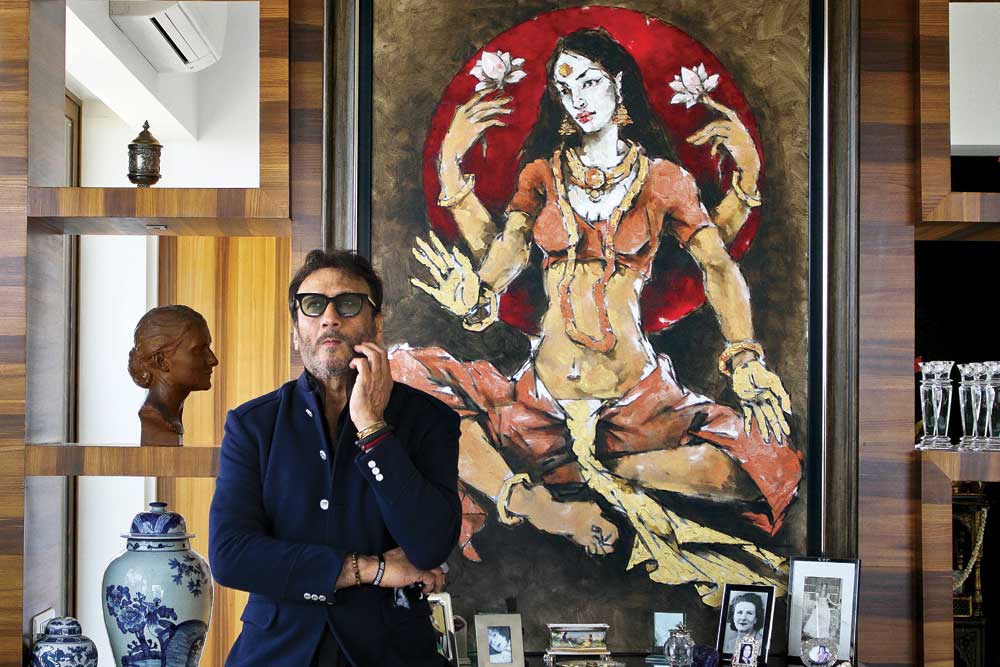 WHEN JACKIE SHROFF walks into the drawing room of his sprawling Bandra penthouse with an extra shirt in one hand and sunglasses in another, you pay attention. If personality was the kind of thing one could borrow, young men of today’s generation would be cosying up to the 60-year-old. As he watches the Arabian Sea, which his house overlooks, he is in his element. The scene is so picture perfect, you almost feel like you are looking at an image on your old boxy television set. Not a hair is out of place, and his face is set in a stern expression. He is right there, but inaccessible, just like heroes of his heyday. His Man Friday fusses around him, and holds a mirror, just in case his boss decides to change his ‘look’. “Kis ke liye wait kar raha hai yaar tu? (Who are you waiting for?)” Shroff scolds him when the guy misses a blemish on his face.

Yes, it’s all a bit surreal and old school, and such a splitting image from the 90s that you feel transported to that era. Here is the man who made printed shirts on a sunny beachside look cool. His contemporaries would take lessons from him on ‘how to sport a moustache’. A cigarette between his lips made smoking seem hep. And he was, hands down, the sexiest cop in Hindi cinema for… well, a long time. But then he offers you some home-made poha. “Yeh sab drama hai boss (All this is drama, boss). You want some lemon with your poha?” he asks with smile.

In a split second, the image you’d built in your head comes crashing down. Most recently, we saw Shroff on screen lurking around in a baniyan and pyjamas in a short film titled Khujli, and turns out that’s the look he may prefer. “For me that film was so real, it is a glimpse of something we are all trying to hide, most of the time,” he says. It was gutsy to choose a film that talks about BDSM and the rekindling of intimacy between an elderly married couple. When you watch the film, you realise how easily he slips into playing a middle-aged man whose fragile ego is shaken when his wife questions his lack of interest in sex.

But he’s glad he did it. “I did it because I thought it was funny. Who defines age anyway? Parents spend all their lives bringing kids up, but you cannot lose yourself in the process. Youngsters today need to understand that their parents are living a life too and they must respect that,” he says.

Between his wife Ayesha and him, he’s undoubtedly the ‘cool’ parent. He confesses he is happy to hang out with his son’s friends at a party. “I’ve never seen myself as a Dad. I talk about everything with my kids. Making love is as basic as eating food or taking a shower. Why should we be prudish about it? We take out the essence of life if we choose to be like that,” he adds.

He then describes his first experience with a girl. It happened in a cinema hall during Roop Tera Mastana (1972), with his then girlfriend. But before he could make his next move, the interval came. “The first time I hugged her, my heart was in my mouth. I was 15 when a girl threw a little stone at me with the help of a rubber band. She was trying to get my attention. These are moments I will never forget. I was a complete romantic. I used to make small hearts on white paper and colour them red. We’d go to the barber shop and ask for Old Spice, to impress the girls. Girls and boys these days prefer to stay on the phone than express themselves honestly. That’s something no one can teach you. The films we made then may have been over the top, but the expression was there.”

In his heyday, Shroff stuck to conventional roles. He was Ram in Ram Lakhan; the son who’d rescue his mother, the good cop among brothers, the one who went out of his way to woo a woman and marry her. But he’s happy he was a part of that space and has now grown out of that. Undoubtedly, even after decades in the business, Shroff enjoys being in front of the camera. He has, on an average, done at least two full-length films every year in the last five years. He might even be the only actor among his contemporaries, apart from Anil Kapoor, who hasn’t taken a single year off since he started. “My father told me I’d be an actor one day. He was an astrologer and he’d predicted a lot of the things that eventually happened to me,” says Shroff.

Making love is as basic as eating food or taking a shower. Why should we be prudish about it?

Growing up in a one-bedroom apartment in Malabar Hill, Shroff saw tragedy early in life. His brother’s death significantly changed his childhood. “I was a very shy kid,” he says, “I used to get scared of firecrackers and those people who’d wear masks and come ask for money. I would be startled easily. I saw my 17-year-old brother drown to death when he was trying to rescue someone, and that left me shattered.” He found some solace in plants and cooking, but there was a lot within him waiting for expression. He had to quit his education after Class 11, for financial reasons. But he has no regrets. It was then that he discovered himself. “I was part of a big gang of boys and we were really revelling in the last leg of the hippie era. I wasted a lot of time then, but I was also really discovering Mumbai, and so many people that made the city. I remember there was a discotheque called Slip Disc. Led Zeppelin had come down to perform there once (in 1972) and we all went crazy. We did not have glasses, houses to protect us, just the shade of the tree and eventually I will go back to that,” he adds.

On one such random afternoon in the city, someone at an ad film company spotted him at a bus stop and suggested he do a photoshoot with them. Shroff, who was working as an accountant at a travel company in town, casually walked into the ad film office, and walked out with a cheque of Rs 7,500. “It was an ad for Century Mills and I was thrilled. People were paying me to get my pictures shot! The world I came from, getting paid to pose for the camera was a luxury. So when it happened to me, I made the most of it. There were posters of me in the city, this city that I grew up in. It was really something.”

Subhash Ghai launched him in Hero (1983), his first film as a lead actor. There was no looking back after that. Jackie Shroff became a sensation almost overnight. He was a heartthrob, not so much for his acting skills as for the way he carried himself. “I did not let myself go. I was a boy from the streets of Mumbai and I remained that. Be it with my body, my language, my attitude. It wasn’t like I was pretending to be someone else. Fame and all of that was exciting, but I could never let go of my true self,” he says.

He did 17 films within two years of Hero. Some good, some bad, some very bad. But he was the ‘it boy’ of Bollywood. He remembers using a web camera to chat with his fans in those days. “I’d travel between Chennai and Bangalore and would chat with fans wherever I got a good connection. My daughter would miss me as I’d be away for days on end, so I’d really amuse her when she came on the web camera. My passion for films then was not something I understood. I understand it now, because I want to continue doing it.”

Controlled in his expression, both physically and emotionally, Shroff left a mark with some memorable performances. Both his acting and his screen presence were unmatched in Ram Lakhan (1989) and Parinda (1989). But it was much after that he came into his own as an actor with Gardish (1993) and 1942: A Love Story (1994). “I did what I had to then. I did not plan to be a hero. Acting for me was so far away from reality. My brother was working as a mill labourer when he passed away. But sometimes it happens,” he adds.

What centres him is a passion for nature, food and his undying love for the city. I’ve heard very few actors speak about Mumbai as Shroff does. It’s not the cinema or the stardom for him, but the textures that he grew up with. “If I travel, I go up to Goa, Matheran, Mahabaleshwar. Even if I go out of the country, I have to come back as soon as possible. The grime of Mumbai is what made me who I am. The stench, the filth, the dust, the kids from Dharavi, that is the life I saw. Today people give me awards, call me the most stylish man around. But I still prefer wearing torn jeans and borrowed shoes. I miss going to Marine Drive and sitting there aimlessly. I am so used to being an island boy. The rhythm is different here. I tell my kids, ‘Steal these moments out of your life, because when you grow older that’s all you will have to hold onto,’” he says.

Shroff always wanted to be a chef. Someday he wants to head to a quiet beach town like Gokarna and cook for people there. “I will work till the day I die. But I will also do all the other things that I love to do. I tell my kids, ‘Don’t get ahead by harming anyone. Kisika pair lamba karke aage mat baddho’.”

Shroff tends to keep his philosophical side to himself. But occasionally he reveals that too. He says, “There’s a poem I love which goes, ‘Pedh kaatne kuch log aaye thhe mere gaanv mein, Dhoop bahut hai, keh kar baith gaye usi ki chaanv mein’ (Some people came to my village to cut down a tree, but the sun’s so strong, they said, and sat down in its shade). That’s how ironic life is,” he says.