Pankaj Kapur, who returns to a comic role after a long hiatus, shares his recipe for acting 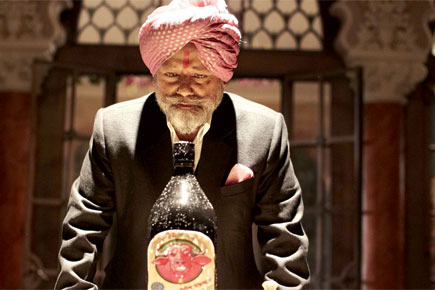 Pankaj Kapur, who returns to a comic role after a long hiatus, shares his recipe for acting


So, what exactly drew Pankaj Kapur to Matru Ki Bijlee Ka Mandola? Vishal Bhardwaj, one would presume. It turns out, no. It was the prospect of doing comedy, of “having a ball” sort of role that he hasn’t done in a while. The recently-released Matru Ki Bijlee Ka Mandola saw him not only coming back to acting after three “exhausting and enriching” years spent working as a director on Mausam, but also returning to a genre he enjoys most. You needn’t go further than Chameli Ki Shaadi, Jalwa and the TV series Zabaan Sambhalke and Office Office to know how accomplished Kapur is at comedy. Yet, he is remembered by critics mostly for his serious performances. Who would forget Abbaji from Maqbool and its famous betel-leaf scene that conveyed so well the don’s quiet terror? Or that diligent doctor in Ek Doctor Ki Maut? Or that dissenting juror in Ek Ruka Hua Faisla?

He takes pains to remind you of his comic work, which has contributed to his reputation as one of Indian cinema’s finest actors. “Either the audience has forgotten that I have done comedy before,” he says, from behind his large desk at his suburban Mumbai office, “Or there has been a long gap, or they are not fully aware of my work.”

“Maybe after watching Matru Ki Bijlee Ka Mandola, people—young people—would be surprised to see me letting my guard down, drinking and dancing, playing a flamboyant, flirtatious, gregarious old man,” he says, adding with some pride, “It’s nothing new for me. I have had fun and I have given them fun.” For audiences of an earlier generation and certainly for purists, Kapur is the last word in acting. Most of us who have followed his work are curious to know: how does he get it right each time, particularly since the characters he plays are rarely alike? “It’s very difficult to explain that,” he says. “I can just repeat what somebody had said earlier—that acting is in some ways like making daal (pulses). If a daal is well-cooked and if you ask the cook how he made it, he will say that he first cut some onion and tomato, mixed turmeric powder and salt, then boiled it and finally, garnished it with jeera. That’s how it is, to be honest.”

Surely, it isn’t as simple. “Procedurally, it’s like that. I didn’t say it is as simple,” he snaps. “But somewhere I would like to believe that there is some method in the madness.”

To those critics who have put the stamp of a ‘method actor’ on him, Kapur responds with a hint of annoyance: “How many people know what ‘method acting’ is? People use the term very loosely.”

“We must realise that [Constantin] Stanislavski evolved and wrote books on method acting and only suggested [that] actors follow it. He didn’t say, ‘You will become an expert if you read it.’ In the end, you have to rely on your skills and derive your own method.”

By way of example, he says, “As a writer, probably your method for an interview would be—you first do research on the subject, then prepare a set of questions, record it, go back to your office, and finally, write an article. While writing also, you will decide, ‘Should this be my first sentence or should this be my headline.’”

When I protest saying, ‘That’s not my method,’ he laughs and the mood lightens. “I have not read An Actor Prepares (Stanislavski’s bible on acting). Does that make me a non-method actor?” he asks, seriously. “But I might read it soon, just to see what [the noise] is all about.”

His way of working is “to do my best under the given circumstances”. To his mind, a performance is satisfactory if he succeeds in breathing life into his character. “First thing is to understand the content of the subject and dig as deep into the script as possible. It is not just about acting, but about creating a human being.”

Very much a “director’s actor”, he reads scripts carefully and is attracted mainly by those that come “straight from the heart”. If he ends up turning a film down, it could be possibly because it has failed to “move” him. “The subject is the most crucial factor [in making a decision]. Sometimes, you have to say ‘no’—you do it politely so that you don’t hurt the person—because maybe you don’t believe in the subject, maybe dates are not available, maybe the money is not agreeable or maybe you are not sure about the director’s ability.” But once on board, his involvement and concentration is absolute. “I am interested in the totality of the film, not just my part. Usually, I have discussions with my director beforehand. We talk about how he perceives things and how I perceive them and we come to a point where we are on the same page. Differences are ironed out before we arrive on set,” he says.

Speaking of directors brings us to his creative and personal relationship with Vishal Bhardwaj, which has produced such output as Maqbool, The Blue Umbrella and, of course, Matru Ki Bijlee Ka Mandola. At first, Kapur remembers declining every offer that Bhardwaj made him. This was during Bhardwaj’s television days. “The association started with his doing music for a TV episode of mine, which never saw the light of day,” he recalls. Then, Maqbool happened. Since then, Kapur has become an important presence in Bhardwaj’s cinema. One is tempted to ask him why he denies us the pleasure of seeing him more regularly on screen, but he pre-empts the question. “I am careful about what I pick. Ideally, I would like to do four films a year, but it doesn’t quite happen that way,” he says, expressing a wish to work with new-age directors. He lists a shortage of good scripts as another reason for keeping away. “For an actor like me, choice is very limited.”

After 30 years of acting, it is surprising to hear Kapur refer to himself as an “obedient student” uneasy at being called a ‘master’ or a ‘legend’. “When I hear people say, ‘Oh, it was a perfect performance’, I ask myself: ‘Can perfection be achieved in this imperfect world?’ Can you fully master anything? Creativity is an endless journey. In Noh (classical Japanese dance-drama), they call it the ‘flowering of an actor’. An actor plays the same role for 50 years and maybe he will flower, maybe he will not.”

Though there can be an attempt towards perfection. “You could be closer by 10 or 20 degrees,” he says, “and some innocents may perceive it as perfection. Let them be happy with that myopic idea of perfection.”

Which is why he refuses to pick his best performances, preferring to talk about peers he regards highly. “Naseer (Naseeruddin Shah) can always surprise you. Paresh (Rawal) has great variety, so does Kamal Haasan.” Among the younger lot, he singles out Irrfan Khan and Nawazuddin Siddiqui. His son Shahid, too, finds endorsement. “In Kaminey, you saw only a small part of his talent. Give him some years and he will prove his true potential.”

Finally, when the topic of Mausam, his directorial debut that got a drubbing is broached, he says it has helped him mature both as a person and artiste. “It has taught me more than anything in my life.”