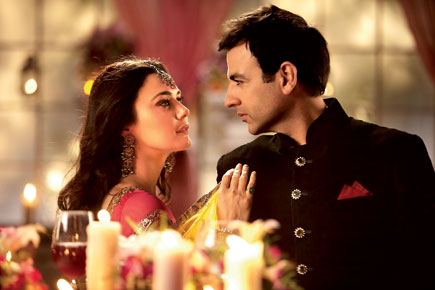 
Ishkq in Paris, dare we say, is a talkie. It’s also a ‘walkie’. So we walk the talk in Paris, and that suits actress, screenwriter and producer Preity Zinta just fine. She plays Ishkq Elise, a professional photographer. We rarely see her take pictures, but that is understandable because you have to stand still to compose frames and make focal adjustments. This lady is on the move, and makes all the moves too when she meets the hapless Akash (Rhehan Malliek) on a train. She yanks him along on a leash across the city, drinking endless glasses of wine and many cups of coffee at landmark watering holes. It’s freezing cold and Ishkq is wearing a mini-skirt and boots. Yet you never see them visiting the rest room. C’est fantastique.

The idea is to show the couple fall in love, hour by hour, through conversation alone, because there is no plot development in the film. For this to happen, as writer if not actress, Zinta has to allocate talk time to the Akash character. Yes, she does give him a few throwaway lines, but actor Malliek seems hesitant, even nervous, and this diffidence destroys everything natural in the relationship.

The two are as different as chalk and cheese, in appearance and personality, so you wonder where the chemistry comes from. If it had been written as a ‘boy toy’ romance for Ishkq, the affair might have had some credibility, and a talkative older woman who gives the young man a tour of Paris, at the end of which he falls in love, could have been a workable scenario.

But Ishkq in Paris is more a come-back vehicle for a star who has been on sabbatical than it is a romantic story. Even the structure, the brevity of it all, done and dusted in an hour-and-a-half, works like an announcement: ‘I’m back, guys, hurry up, cast me.’