Huma Qureshi returns to the screen playing the chief minister of Bihar in a career that has spanned mainstream, international and indie movies 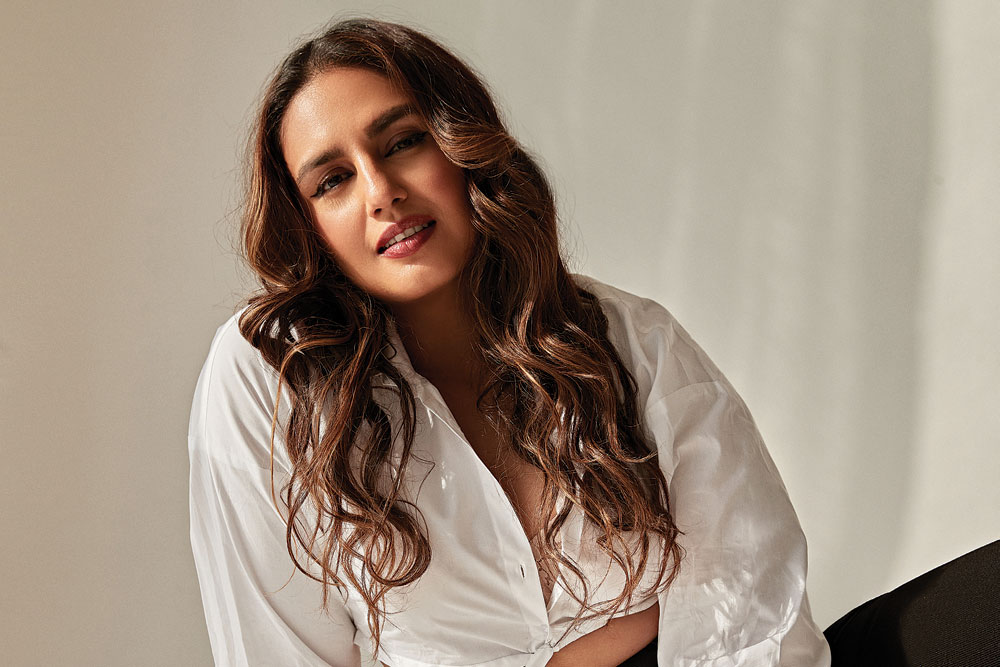 
Permissan leni chahiye, na (You should have sought my permission, no)?” Ten years ago, when Huma Qureshi lit up our screens with her gentle rebuke to Nawazuddin Siddiqui who took her hand in Gangs of Wasseypur, she announced the arrival of the new woman with a flourish. Her Mohsina was spot on as a woman who lived and loved on her own terms. Since then, Qureshi has played countless women onscreen, but almost always she has stood out for having a mind of her own. She has played key roles in interna­tional movies, headlined a web series franchise, and emerged as an unofficial spokeswoman against body shaming.

In an industry that has celebrated homogeneity, she has embodied diver­sity. There is the prostitute in Sriram Raghavan’s Badlapur (2015) who is quite satisfied to be kept by a rich man; the label-obsessed wife in Jolly LLB 2 (2017); the woman who dared to love differ­ently in Netflix’s Leila (2019); and now, in one of her most memorable roles, a second season as Rani Bharti, reel chief minister of Bihar, in SonyLIV’s web series, Maharani.

It’s not common for a woman to headline a franchise of any kind— Shefali Shah, who plays Vartika Chaturvedi in Netflix’s Delhi Crime, is the only other one who joins an elite club populated by male characters such as Srikant Tiwari (Manoj Bajpayee in The Family Man), Kaleen Bhaiya (Pankaj Tripathi in Mirzapur) and Madhav Mishra (also Pankaj Tripathi in Criminal Justice). Qureshi’s Rani Bharti is loosely based on Rabri Devi, who was appointed chief minister by husband Lalu Yadav between 2000 and 2005 while he was imprisoned for his role in the fodder scam. Rani Bharti is a modest, rustic woman, completely at ease milking her cows, spraying pesticide in her field, and cooking on a fire stove.

Equally, with the help of an IAS officer, Kaveri, played by Kani Kusruti, Rani Bharti follows up her instinct to do good, whether it is getting to the bottom of the reel fodder scam in season one or going after the MLA who rapes and kills a young woman in season two. In a telling scene, where Rani weeps because her husband has taken a mistress, and her home has been destroyed, Kaveri tells her, “There is not a single woman politician anywhere in the world who has been successful and had the support of her husband. No man likes to see his wife becoming more powerful than him. So stop complaining and get on with the task of fighting for the people of your state.”

Kusruti is an admirer of Qureshi’s work at two levels. “Star actors rarely make you feel comfortable. There is always a hierarchy with them. Huma treats everyone the same, no matter where they are in the pecking order. She is a great prankster on set and very patient with someone like me whose first language is not Hindi,” she says. For Kusruti, Qureshi is also a great advertisement for the idea of diversity in beauty, a concept still somewhat alien to Bollywood even in the 21st century. “It’s sad we have to have this conversation even in 2022. The idea of beauty in the north is very different from elsewhere. In Kerala, for instance, being thin was not a prerequi­site for a heroine for the longest time,” she adds.

Filmmaker Nikkhil Advani, who cast her in D-Day (2013), says she has struggled with weight all her life, and constantly had size-zero flaunted in her face. But she has overcome those insecurities about being glamorous enough for Bollywood, he says, by creating her own niche, a next gen­eration Konkona Sen Sharma. “She is intelligent, she reads, she is trained in theatre, she can mould herself to the role,” he adds. And she tries to ensure she doesn’t repeat herself. Says Qureshi, “After Maharani season one, I was of­fered so many roles just like her. I said I have given everything to Rani Bharti, I can’t do more.”


“After Maharani Season One, I was offered so many roles just like her. I said, I have given everything to Rani Bharti, I can’t do more,” says Huma Qureshi, actor

Qureshi was always determined to be a performer, recalls her brother, Saqib Saleem, younger by a year, and also an actor. She was head girl at Rai School, Lodhi Road, and always a star in debates, plays and school functions. Sal­eem says they grew up in a simple, con­servative, middle-class household. “Our home was in Kalkaji in Delhi and our grandparents were in Nizamuddin. My father has six brothers and three sisters, so there were always lots of cousins around, 30 of us, in fact,” he adds. “My mother always pushed Huma to excel in academ­ics and take part in extracurricular activi­ties. I loved sport, so I was made to try every sport until I discovered a passion for cricket,” he says. So much so that he played cricket for Delhi under-25s and then for two years for Jammu and Kashmir, where his mother is from.

Bollywood was alien to the family. The two older siblings, both brothers, joined the family business of restau­rants, branded Saleem’s. “But Huma went to Mumbai first, for a film role that didn’t materialise, and I joined eight months later. But we didn’t live together until 10 years ago, when we realised it was foolish not to,” he says. Qureshi is at all times aware of her upbringing, and says, “Tehzeeb is in my DNA, main jitna bhi rebellion karoon, tehzeeb nahin jaati (Refinement is in my DNA, no matter how much I rebel).”

Directors love working with her. Rohan Sippy, who directed her in the ZEE5 web series, Mithya, says, “Huma is rare among her contemporaries in that she has broad appeal with our audience, combined with incredible command over her craft and has both an instinc­tive and intellectual understanding of the material she works with. Working on the crazy schedules that series need to operate on, she consistently hits the perfect tone for her character, even at the end of a gruelling day of five or six scene shots.” Plus, he says, she is also terrific behind the scenes. They had great cama­raderie within the unit over a month-long shoot in Darjeeling, and Sippy says her infectious spirit and energy were key in setting the tone there as well.

Qureshi’s contemporaries in the film industry are Richa Chadha and Kalki Koechlin, women who are able to trav­erse the range from artland to heartland. They were the alternatives to Sonam Kapoor and Sonakshi Sinha. They came from a theatre background but were able to negotiate commercial cinema with ease as well. So for every indie film she’s done, whether it is Gangs of Wasseypur or Luv Shuv Tey Chicken Khurana (2012), she has also made a crowd-pleaser like Dedh Ishqiya (2014) or Valimai (2022). She has worked with Deepa Mehta (Leila) and Gurinder Chadha (Viceroy’s House, 2017), as well as Zack Snyder in Army of the Dead (2021), living out of her comfort zone in a Los Angeles Airbnb.

“I just want to get up every morn­ing and go do my work and empower women and children through what I do,” she says, adding, “I think the focus for women in my line of work for too long has been to just look good. Nothing much is expected of us. We are not pushed to develop our personalities either through our reading or anything that adds value. I am like any other girl. I love dressing up and putting nail polish. But it can’t be just that. Times are changing and my female colleagues are demanding better roles, and asking to be looked at differently. There is a collective effort in bringing about a change,” she adds.

“Times are changing and my female colleagues are demanding better roles, and asking to be looked at differently. There is a collective effort in bringing about a change,” says Huma Qureshi

NK Sharma, acting coach who taught her for 18 months in Delhi while she was in Gargi College, studying history, remembers a bubbly girl who was a fantastic learner. “We had lots of conversations and lots of kebabs,” he remembers. She had a hard time ini­tially, in Bollywood, he adds, because of her weight and work wasn’t coming her way. Qureshi, now 36, says she did a lot of introspection during the pandemic, when she chose to act in Maharani, “I felt a part of me was conforming despite my brain and heart telling me differently. The time I got with myself convinced me to be unafraid. Was I scared of taking on Rani Bharti’s role? Playing a mother of three? I was, but it gave me the confi­dence that I was able to do something others were not. And that I would like to die on a film set. Preferably after the film is done.”

While laughing, joking and acting. “I hate the idea of being morose or serious all the time especially when we’re not always shooting in glam and super cool conditions, I find such people a pain in the arse, frankly. We don’t know whether a film will be a hit or a flop but I want everyone to have fun working with me. That bonding, that human relationship is really important for me. Actors do their best work when they are not stressed all the time. After all, it is just acting, not finding a cure for cancer,” she adds.

And she will be doing a lot more of it in the near future, with a glam role in the Netflix movie Monica, O My Darling, a part in Double XL (for which she put on 20 kg and lost it as well), Tarla, playing a homemaker turned chef, and in Dibakar Banerjee’s film set in Kashmir. The Maharani is set to rule the screens.