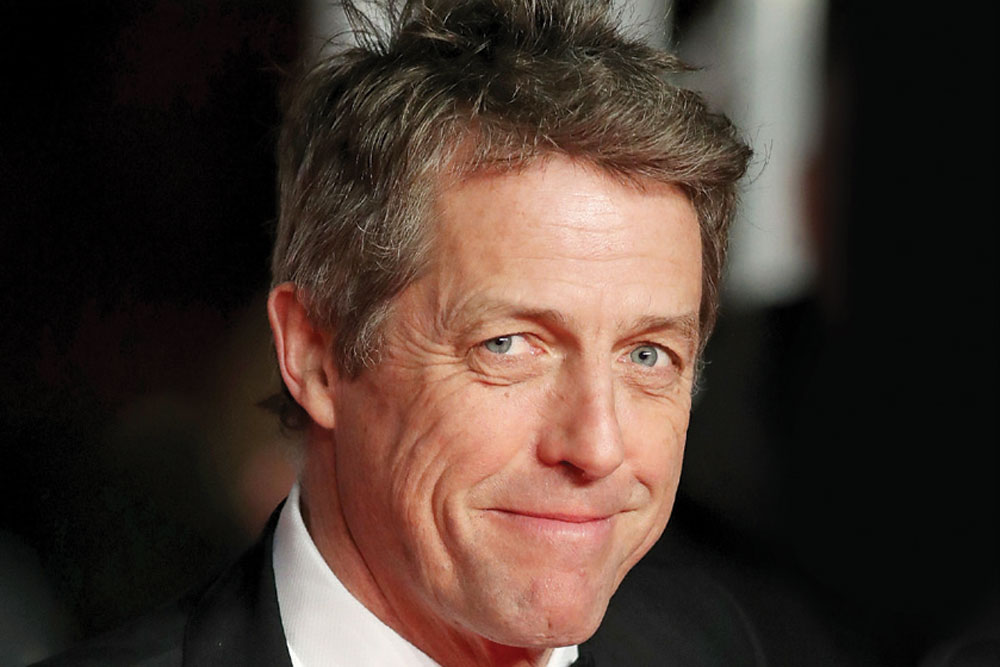 
HUGH GRANT TALKS about one of his latest projects, HBO miniseries The Undoing, a recent psychological thriller based on the 2014 novel You Should Have Known by Jean Hanff Korelitz. Grant plays Jonathan Fraser, an oncologist. Nicole Kidman stars as Grace, his wife and a psychologist.

From Four Weddings and a Funeral to The Undoing, are you consciously trying to move away from romantic comedies?

I didn’t exactly choose it; it chose me because I just got too old and ugly for romantic comedies, thank god. I haven’t done one since The Rewrite [2014]. In the meantime, I’ve almost enjoyed acting. I’ve enjoyed The Man from U.N.C.L.E. and the Pirates cartoon very much. I enjoyed Cloud Atlas, Florence Foster Jenkins and Paddington 2. I feel I’ve been able to spread my wings. I would include this job, although this one doesn’t come into the character acting category exactly. It’s a new challenge and is pretty deep and dark, so it’s fun to have a go at that.

This is the first time you are working with director Susanne Bier. How has that been for you?

Susanne Bier and I have a history because about 10-12 years ago, she was going to direct a film. I can’t remember what it was called, but I watched all her films and I loved her Danish films. This was an English film. I said to her, I like the script, but it’s not quite right yet, as it wasn’t written by her. I said let’s develop it. We developed it and developed it, but in the end, I didn’t think it ever got there. So I walked away having tortured Susanne for a year. Officially she should hate me, so I was surprised when she wanted me to do this. I am very glad I did. She’s a genius, she’s a proper filmmaker. She’s taken a very clever American script and made it into something closer to European cinema. I think that marriage is always interesting. It reminds me of when Roman Polanski took Rosemary’s Baby, which on paper is a classic American genre piece, and gave it a strange Polish twist. She’s taken a piece of American, beautifully written television and turned it into Scandi-noir.

Tell us about working on a Nicole Kidman production and with HBO.

Nicole’s team of producers are lovely people. But I give credit to HBO. I never worked for them before. They were lovely; they spoiled the actors in a way I really appreciate. I love to be spoiled. The hotel rooms and flight were perfect and beautifully taken care of. They were respectful of the filmmakers and the material, letting them get on and not interfering. You don’t have 16 irritating suits sitting around a monitor giving notes. I’m sure that’s why they have ended up with the reputation they have ended up with, the sort of Rolls Royce of television.

What’s next for Hugh Grant?

I don’t know. I’m teetering on the brink of signing up for something now. I don’t know if I’ll do it. I agonise over these things and I like to torture the producers. Eventually I’ll get bored of my dithering and just take a leap.

What is it like to be married and to be a parent?

I think I’m all right. I am married to a brilliant tennis player, who makes me play three times a week. So I’ve got a good strong heartbeat, but I drink like a fish. On the counter side, anyone with children would probably say the same; with young children, it’s simultaneously the worst time in your life and the best. On a day-to-day basis, as you tread on another broken toy with a hangover, it’s just awful. But when you look back at your photographs in your iPhone of the last few years, you realise, oh I have been extremely happy. It’s very odd, that’s what I would say.