Guneet Monga: The Prize of Pursuit

Guneet Monga has produced iconic Hindi films. She is now taking the story of women in an Indian village to the Oscars 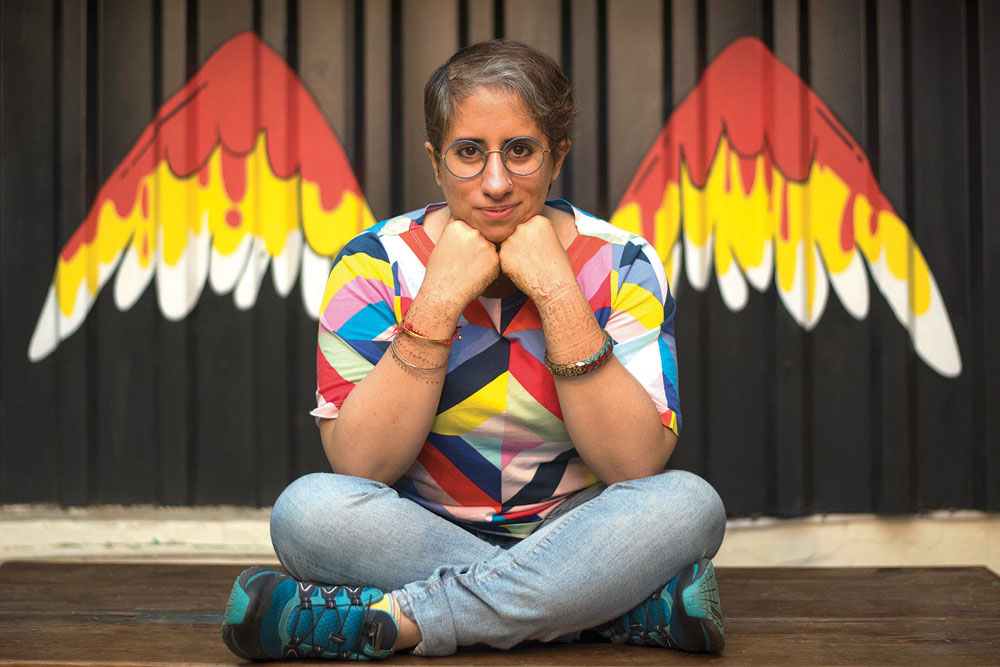 ON FEBRUARY 24TH, 2019, producer Guneet Monga will be on the Oscar red carpet with 10 American school girls, their class teacher and a woman named Sneha from Hapur in Uttar Pradesh. All of them are responsible for creating a 25-minute documentary Period. End of Sentence, directed by Rayka Zehtabchi, which has made it to the 91st Academy Awards shortlist in the Documentary Short Subject category. The film is a brave account of a group of women in UP battling challenges to create low- cost sanitary napkins in their village. It not only encapsulates their work over months, but also highlights the unheeding attitudes of most families around the subject of menstruation. In Hapur, like many other parts of India, even today, women use rags, hay, sawdust and other unhygienic absorbents during their period, because of a lack of better options, awareness and a deep-rooted taboo attached to it. This film tries to start a conversation around a fundamental right to cleanliness and dignity.

“When a group of school girls from [Oakwood School] North Hollywood learnt about how periods are dealt with in villages here, they really wanted to do something to help create awareness. They worked with the Action India NGO that has been running an initiative in UP for years now and decided that they wanted to raise money to donate one low-cost sanitary napkin machine to the village. That’s how the idea of the film came about, and they connected with me, and I assured them that their shoot in India will be taken care of,” says Monga, a BAFTA nominee and the founder of Sikhya Entertainment, a boutique film production house.

The story of Period is told through a group of protagonists who are creating change around them. These are women from the village who face stigma and the pressures of patriarchy daily. The difference is they have chosen to fight it. Among them is Sneha, a volunteer with the project, who dreams of becoming a police offer in Delhi, unlike her peers who are getting married. “If I’m empowered, I will earn the respect I deserve,” she says in the film. “Padman made the conversation wider last year, but it’s a long way to go before the silence and whispers around menstruation end, and it’s normalised. I was surprised to see how even the school girls from America were not too comfortable talking about it on camera. It goes to show that shame around periods is a mindset, irrespective of where you belong, and it’s that mindset that needs change,” she says.

Ten years ago, Monga walked the Oscar path for the first time. Her film Kavi, a short on bonded child labour in India, was nominated among the top five short-fiction films at the awards. “I remember how I’d no money for the campaign or to fly the team down to the Oscars then, and I wrote to everyone from the President to the Prime Minister to every rich businessman in the country asking for help. We even held a screening of Kavi at the Rashtrapati Bhavan.” Eventually their entire stay was taken care of.

Monga is the only Indian producer who has had two Oscar and one BAFTA nomination (in 2015 for The Lunchbox, shared with Anurag Kashyap). She is also the producer of stellar films such as Gangs of Wasseypur (2012), Haraamkhor (2015) and Masaan (2015). Variety magazine recently listed her on its ‘International Women’s Impact Report 2018’ for ‘doing extraordinary things on a worldwide stage’. If there’s one Indian producer every top-notch international film festival is looking at these days, it’s her. And one can argue that if not for the team that Anurag Kashyap and Guneet Monga built, the face of indie cinema today would have been different. Always having put her money and might behind offbeat, hard-hitting and socially relevant films, Monga’s journey from a media student in Delhi to an acclaimed producer in India and abroad is film-worthy in itself.

“When I was 19, one of my neighbours in Delhi came to me saying he had Rs 50 lakh and asked me to run a studio to shoot photos and videos of babies. I convinced him that it was a very bad idea and asked him to give me the money to make a feature film instead. I came to Bombay and I was really naïve and vocal about the fact that I had this money. I met all kinds of shady people, who thought I was a kid and they’d take this money off my hands easily. Then I met Subhash Kapoor with whom I made my first film Say Salaam India: ‘Let’s Bring the Cup Home’ (2007) about the Indian cricket team’s World Cup journey. Unfortunately, it released just a day after India lost the cup and nobody turned up for the film.”

By the end of her first film, she was penniless and in debt. However, she stills calls it her first and biggest milestone. Monga spent the next nine months screening the film at schools and colleges around Delhi. “It was then I realised independent films don’t make money for producers, but I wanted to change that. I went to my college, I told everyone that my film had bombed and I needed help. We went from school to school, convincing principal after principal to get students to come watch the film at the rate of Rs 50 per ticket. It took time, but at one point I had 12-15 screens in Delhi simultaneously running my film and kids in the audience. I made all my money back and returned it to my then neighbour,” she says. Probably why as a 20-year-old woman, in an industry where most producers were 50-year-old men, Monga had little to fear. She had already reversed her first failure and was ready for the future.

Growing up, she was always encouraged by her parents to take risks. They told her she could be anything she wanted to. As a young girl she dabbled in everything from deejaying to car rallying to dancing to drumming, and eventually landed up in film production.

She claims she has learnt everything in cinema from her mentor Anurag Kashyap. “Working with him was like working with a walking-talking school of cinema. My understanding of the medium was restricted to the big Bollywood films I was used to watching. Five years with him, I learnt how one could criticise, and how debate was necessary, even if it was around the best film ever. I figured out what repeat beats were and how same ideas were being sold under the garb of new cinema. I also realised how intuitive this business is, and no matter how much you plan, eventually it is about how strongly you and I feel for the story and what we can do with it,” the 35-year-old producer says.

“Cinema halls will always remain, but we need to expand our minds beyond the box office, because cinema is much bigger than one Friday”

She never wanted to take the heart out of a story, no matter how experimental it seemed. If her films didn’t have a place at the Indian box office, she carried them onto the world stage that included festivals at Toronto, Sundance and Venice. She remembers having to stick posters of the film That Girl in Yellow Boots (2010) on t-shirts of her teammates at Venice, because all other spots were too expensive. “The struggle then was to make people listen to you, because you were a nobody. The struggle today is to be relevant, because you’re somebody,” she says. Bit by bit she learnt the ropes of selling her films to international agents, helping create a niche for Indian cinema. The result was a film like The Lunchbox, which put her on the international map.

“I was proud of Lunchbox, but I was also told that Lunchbox was a fluke, and that I was living in a bubble. Somehow my biggest professional high and my lowest personal low collided. I was thoroughly disillusioned. I had five unreleased films, a house I’d sold off to fund one of them (Monsoon Shootout, 2013), I was holding myself responsible for people’s careers, I was triple my size, all my hair had gone white, diagnosed with diabetes and clinical depression. I had made all these movies, but I lost myself in the process. So much so that I hadn’t even found time to grieve for the loss of my parents,” she says.

After taking a sabbatical for a year and a half, during which she even contemplated quitting, Monga was back. “I had to look inwards and stop looking for validation. I went deeply spiritual and realised this is where I belong. It’s a medium where we feel one Friday decides your life, but it wasn’t so. After doing some self-work, I came back to the business, understanding my own value. Understanding that success also means thriving, being alive, showing up every day, and being inspired to tell a story. I’ve had actors sit across me and say, ‘It’s my face that will sell the film, so I can produce it myself. Why do I need you?’ But no. I found the story. I decided to give it life, and most importantly, I am good at it. It took me some time, but I had to believe I was an invaluable asset to every film I associated with,” she adds.

This year Monga has also been invited as a voting member at the Academy awards. A few cynics told her that she was ‘ticking the right boxes’ as a female producer and a woman of colour. “If somebody told me this a few years ago, I would have been shattered. But today if someone looks up at me and says I’m here because I’m a woman or because of diversity, I can look them in the eye and say, ‘I worked bloody hard for it.’”

With platforms like Netflix and Amazon, she feels more empowered. “Now is the best time to make films. If I’m getting millions of people to watch my film through the web, why not? The language of cinema is changing, and we better recognise it soon. A film like Roma (2018) has been made by Netflix and there’s no bigger proof. Cinema halls will always remain, but we need to expand our minds beyond just the box office, because cinema is much bigger than one Friday.”

She believes that in the film business, success belongs to the director, but if anything goes wrong, that belongs to the producer. She hopes to change this. Her next stop, she says, will be a feature film at the Oscars. “We have to go win it. We just have to.”