With the exception of an amusing song, this ‘Jatland’ comedy has little to offer 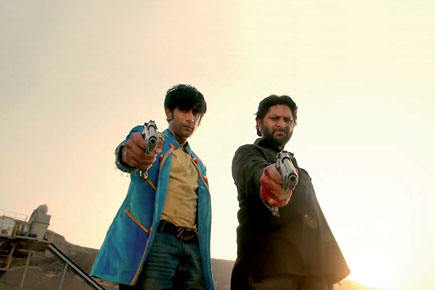 Apparently, after whisky he is risky. Rangeela (Arshad Warsi) has this cautionary note printed on the back of his jacket as he performs at a sponsored entertainment programme to celebrate the receiving of a visa by a feudal type in ‘Jatland’. Rangeela and his cousin Guddu (Amit Sadh) do a little skit for the general amusement of the locals who live tangled in the hideous web of the ‘khap panchayat’.

So far, so good. The movie sets out to be a comic caper set in a social context that is topical, what with all the angry reverberations caused by khaps across the nation. The cousins use their entertainment routine as a cover for the small-time crime that sustains them. But then one day they are asked to kidnap a woman, something completely out of their league.

Things go horribly wrong, and it turns out to be a massive set-up. The action moves back and forth between Haryana and Shimla, where they have taken Baby (Aditi Rao Hydari). It is the abducted lady herself who has arranged the whole drama, it turns out, to escape the clutches of the man who enforces the khap, a menacing character called Billu Pahalwan (Ronit Roy).

This is where it starts unravelling, and in the most clichéd manner of a saga from the era of revenge narratives. The villain is turned into an ogre who can only be destroyed in a climactic bloodbath and we are led by the nose to that eventuality.

One takeaway from this film are the satirical lyrics of the song that introduces us to the protagonists: Mata ka Email. It is sung in the tradition of the devotional bhajan and tells of how the singer got an email from ‘mata’, how he is now going to do ‘chatting shatting’ with ‘mata’ and how she has advised him to procure an anti-virus package to save himself from evil.

And then it ends with giving us her address: Mata dot com.