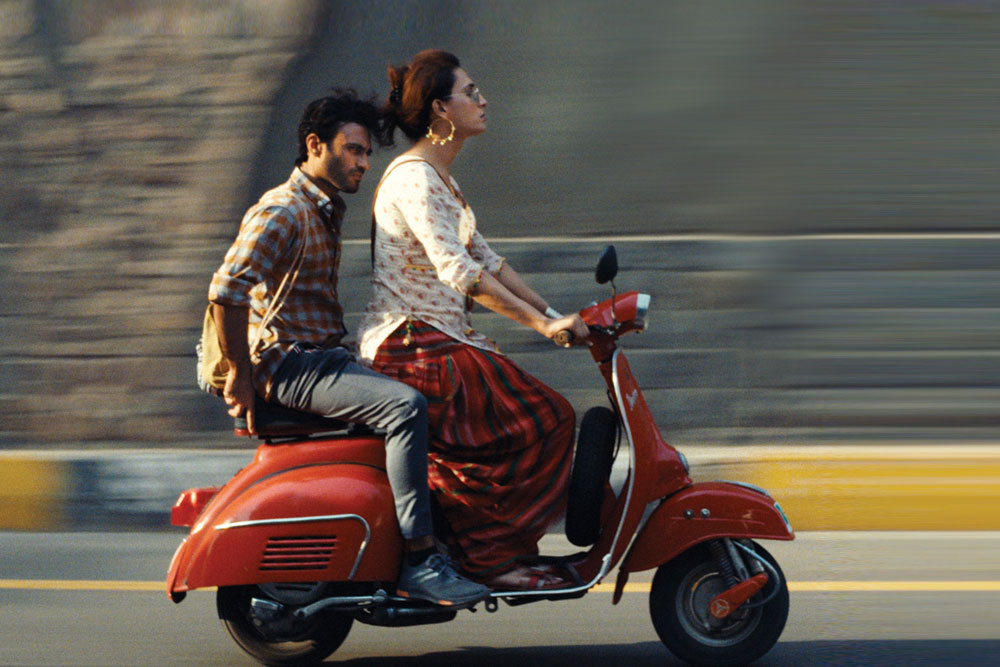 
THERE IS A moment in Joyland, a Pakistani film that has been making news since winning the Un Certain Regard Jury Prize at the Cannes Film Festival last year, when two women, sisters-in-law Mumtaz (Rasti Farooq) and Nucchi (Sarwat Gilani), go to Lahore’s oldest amusement park by the same name. They take the Ferris wheel and scream in sheer joy and pure excitement as the wheel turns them upside down. It is a rare sliver of happiness in a movie where every character is wrestling with their own secret demons. As the ride takes them higher and plunges them lower, the two women, in that brief moment, allow their traumas to fly away. As Nuc­chi screams for god’s forgiveness and clutches Mumtaz, they forget who they are, what they want to be, and where they’re supposed to be. Their cries, for once, are not of anguish, but of borrowed happiness.

Joyland is a place familiar to the Karachi-based director of the film, Saim Sadiq. He has happy childhood memo­ries of spending time in the Lahore park with his cousins. “It just found its way organically into the film,” says Sadiq, “where Mumtaz and Nucchi have their little adventure. It’s a few moments of solace, a scene of female friendship and bonding. And also, eventually the movie is about each character finding their own private joy land, which as we all know is difficult to find.”

Those erotically charged dances find their way into Joyland, with Biba (played by Alina Khan), a transgender woman trying to get a foothold in a theatre where a large, buxom woman is the resident star. Our hero, Haider (Ali Junejo), the younger son of the Rana household, be­comes a dancer there, part of the troupe headlined by Biba. It sets the stage for a series of unfortunate events that haunts viewers long after the movie is over. No wonder the film has been stunning audiences in festivals across the world from Toronto to Busan. Initially banned in Pakistan for being against “Pakistani values,” it is still running in its ninth week in theatres outside Punjab. “The Punjab government banned the film again,” says Sadiq, “and the state controls 60 per cent of the theatre business, but the film is still doing well.”

The film is unusual not merely for the specificity of the story which is resonating globally but also for the collaboration that has made it possible. Sadiq, 31, and his lead producer Apoorva Guru Charan, 30, originally from India, studied film at Columbia University in New York. They were in the same screen­writing class in 2016-2017. “We were not friends, merely classmates,” says Sadiq, but then she offered to produce the mov­ie based on his script. Ramin Bahrani, their professor, and director of acclaimed movies such as 99 Homes and The White Tiger, loved the script and encouraged Sadiq to make the film. 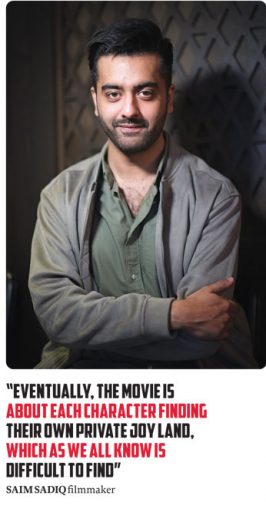 Charan, an LA-based producer who was born in Hyderabad, says it was an evolving script but what drew her to Joyland were the core themes of gender identity and acceptance. “I felt everyone could relate to the characters and the sto­ry and their struggle. I could feel in my blood and bones that this movie needed to be made,” she says. She is currently working on features, some with Sadiq, and some with other first-time directors, so she can continue to showcase “new stories to the world that move me and those around me.”

Maggie Briggs came on board as a writ­er in the last stages of the film and Sadiq says it was her identity as a woman that defined her additions to both Mumtaz and the climax rather than her identity as an American. “I was in pre-production with my production designer, my direc­tor of photography, and she had some ideas and I asked whether she wanted to try them. She did and it worked,” he says. Now, all of them, having been through an intense 40 days of shoot and two months of post-production plus the ups and downs of the restrictions placed by the pandemic, are friends for life. “It didn’t feel like a multicultural set,” he says. “Apoorva is not very proficient in Urdu but it didn’t matter. Joe Saade, the Director of Photography, is from Lebanon. It was a free, open, emotional set. Very professional but with the opportunity for every­one to be vulnerable.”

It’s a uniquely Pakistani story told by a Pakistani-Indian part­nership, supervised by an Iranian filmmaker. The themes are uni­versal. Desire, shame, unrequited love. There is Mumtaz, who has a great friendship with her husband, Haider, but he has no desire for her. There is Nucchi, who has a decent life with her husband, and a healthy sex life, evident in the string of girl babies she pushes out. But, perhaps, the birth of a son would bring that to an end. She is not allowed to work, has to cook and clean for nine family members, but it is a compromise she has accepted in exchange for a harmonious domestic existence. There is the patriarch of the family who rules over his sons and daughters-in-law and there is the widow who stays in the neighborhood Fayyaz Aunty, who comes bearing new dishes every two days. Sadiq says, “It was important for me that Nucchi is a contrast with Mumtaz. Mumtaz wants more. She explores her own sexuality, but she is punished for it, caught out and shamed by her brother-in-law. Then there is the ageing neighbour, Fayyaz Aunty, who lives a solitary life, who has the courage to announce that she wants more. It’s a key moment in the film, everyone is aware of everyone else’s desire and their own secrets. And how uncomfortable everyone is.”

But above all, there are Biba and Haider, two lonely people, who seem to find love in each other, and the intimacy that Haider cannot offer his own wife, who is forced to give up the one joy in her life, her work as a beautician. Like her, Biba too wants love, companion­ship, a career, she even makes a move on Haider. She is the most independent of all the women in the movie, and the one who most resists the idea of being a victim.

In Sadiq’s world, with its striking im­ages and bold colours, Mumtaz’s sex life pales in comparison. The colour seems to leach out of her preternat­urally pale skin. But she, Nucchi and the neighbour, are not the only victims of the patriarchy. The men are too, with notions of what is acceptable under the rubric of traditional masculini­ty. Haider, played with extraordinary delicacy by Ali Junejo, is adept at domestic tasks, whether it is cooking, or taking care of the children, and would have been happy to keep house while his wife worked. But it is not an arrange­ment his father will accept. 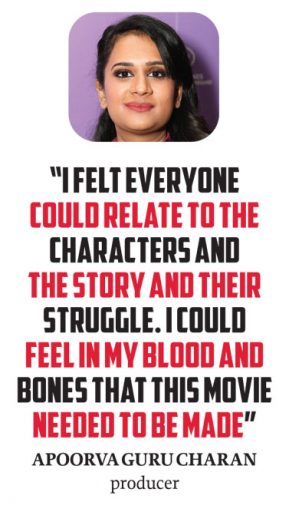 There are moments of extraordi­nary beauty in the film but also of silent heartbreak. There is a scene where Nucchi’s husband looks around furtively before kissing the sweaty forehead of his wife who has just delivered another baby girl—as if it is a crime to display tenderness. There is a shot of a handsome young man bump­ing into Mumtaz at the fairground and turning around to look at her without apologising—the unspoken request in his eyes goes unanswered by her. There is another scene that switches from Mumtaz taking out a bottle she has hidden in the water tank of the commode to Biba removing her nail polish—it says everything about what will happen to Mumtaz without spelling it out.

This is Sadiq’s first feature length film. His short before this, Darling, (2019), which explored the world of erotic theatre, helped him identify Alina Khan, the transgender who plays Biba in Joyland. He and Sana Jafri, the casting director, went to Khawaja Sira, an NGO in Lahore (“a trans-based and trans-led organisation working for the well-being of transgender people of Pakistan”), to scout for his Biba. The work on Darling not only gave Sadiq a working relationship with Alina but also made the theatre alive and real. He rewrote the script of Joyland after the experience of Darling. “Certain things became more illuminated in my head. She was the greatest discovery of Darling. It allowed us to train her, give her the right tools, and involve her in the writing process to make sure it was true to her experience,” says Sadiq. Joyland is one of three Pakistani films, released in 2022, which seem to suggest a resurgence in the country’s long dormant cinema. The Legend of Maula Jatt starring Fawad Khan, was a big box-office hit; Kamli, about three women and their desires, was a critical and commercial success and Joyland was a critical darling. Sadiq says the de­lays induced by the pandemic brought these movies out in succession but there is hope, undeniably.

Joyland was screened at the Dharamshala International Film Festival in November 2022. It is also the first Pakistani film to be shortlisted for the Best International Features Film at the Oscars, bought for exhibition by India-based PVR Pictures. The film may well break the long cultural stand-off between the two countries. With its ten­der yet sharp gaze into the joint family, its graceful unpacking of love and desire told in kaleidoscopic shots, it is a film that ought to cross borders. 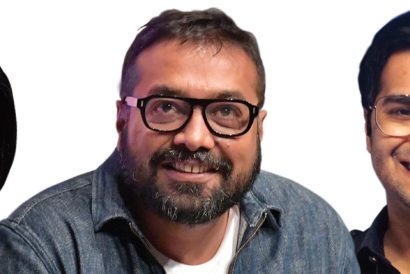 The Dogs of War

Kuttey, a sharply political film, where the state is the eventual scorpion