It’s ironical enough to have Bollywood make a film on plagiarism. This film also betrays its lack of conscience about it. 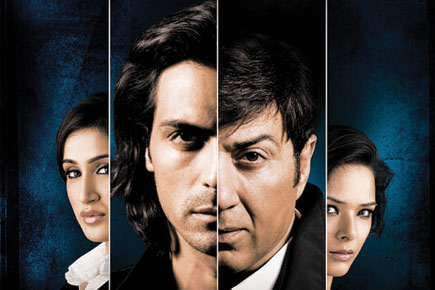 It’s ironical enough to have Bollywood make a film on plagiarism. This film also betrays its lack of conscience about it.


Truth being stranger than fiction, the criminal lawyer, the thriller writer and the publisher often have an incestuous relationship. Writers sit in court and get case files from lawyers. The publisher cross-checks possibilities for defamation and libel.

Hindi film writers could get great tales from the Bombay High Court, but it is evidently too much trouble. In Fox, writer-director Deepak Tijori concocts one entirely from his familiarity with great movie locations in Mumbai and Goa. He takes a celebrity criminal lawyer in the city, enormously wealthy from years of getting crooks off the hook, and retires him, guilt pangs and all, to salubrious Goa.

One day, the lawyer (Arjun Rampal) meets a man called MacNamara who hands him a manuscript to read. It turns out to be a great crime thriller. The next day, Mac is dead. Without any apparent qualms, Arjun takes the book to a publisher and presents it as his own. Yet, plagiarism is not mentioned once.

The book is a set-up and Arjun is framed by someone from his unsavoury past in the courts of Mumbai. His publisher (Udita Goswami) is delighted because life imitates fiction and sales of the book shoot up. His girlfriend (Sagarika Ghatge) thinks he has been suckered by an old client. Just one person in the film, Inspector Deshmukh (Sunny Deol), expresses a vague uneasiness about copyright infringement.

Fox is a leisurely stroll through some of Goa’s heritage homes, a pretty police station and a prison cell that could give competition to a five-star hotel room. And there’s a gorgeous, though not very erudite, publisher with the most beautiful legs in the business.

Sunny Deol is still not a great actor, but has a very firm, straightforward and likeable presence. It is leading man Rampal who is a huge disappointment. After excellent work in The Last Lear and Rock On, he plays the somnambulist to perfection in Fox.