Fahadh Faasil’s new movie is a 90-minute thriller, shot during the lockdown and wrapped up in 18 days. The actor personifies the New Wave of Malayalam cinema 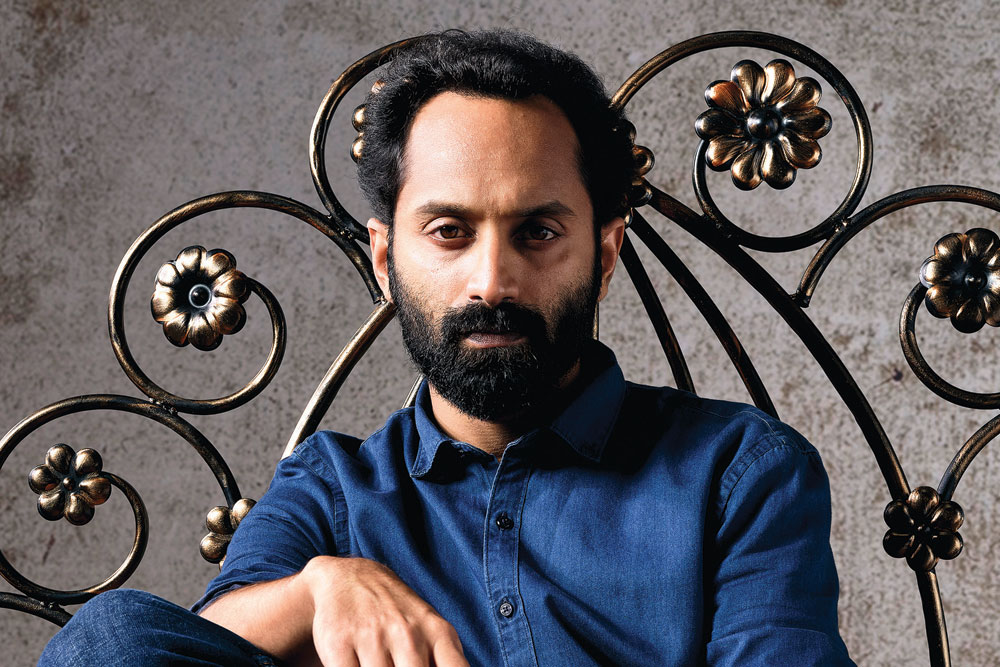 
I JUST HAVE SIX reactions and I play around with these six reactions,” says Malayalam superstar Fahadh Faasil, leaning into the camera, his long fingers up in the air, framing his face, for emphasis. The actor is doing the interview over Zoom from his home in Kochi, less than three weeks since he turned 38 on August 8th. There’s a self-effacing smile when he speaks about his process and he sometimes breaks into a gasping, staccato laughter, embarrassed at being called a great actor.

But his ‘six reactions’ theory is a stretch. There are few actors in India who can slip into a character as seamlessly, as invisibly as Fahadh Faasil.

He is the Everyman in Malayalam cinema—playing a naïve villager who becomes obsessed with avenging his humiliation in Maheshinte Prathikaaram (2016), a wily thief in Thondi Muthalum Driksakshiyum (2017), a cocky, silver-tongued youth leader in Oru Indian Pranayakatha (2013), the software developer with OCD in North 24 Kaatham (2013) and the hyperbolic, sham evangelist pastor in Trance (2020).

Interestingly, except for two Tamil films, his success and his massive fan base has come from sticking firmly to Malayalam cinema—a prolific but small industry. “I talk to my friends about it all the time… the fact that people watch the films in Malayalam and take the effort to understand them. That itself is a big thing for us,” he says, adding, “I’m a big fan of [Hindi films like] Piku and Pink, so films are travelling all across India. It isn’t just happening in a studio or a particular location. Cinema travels everywhere.”

Back in 2002, during the Kerala harvest festival of Onam, Faasil was introduced as an actor through his first film Kaiyethum Doorath, produced and directed by his father Fazil, the respected senior filmmaker who also introduced Malayalam superstar Mohanlal on screen. Eighteen years later, this week during Onam, another of Faasil’s films, C U Soon, dropped on Amazon Prime. But there’s an ocean of a difference between that painfully raw 19-year-old we saw in his first film (a resounding flop as it turns out) and the self-assured, brilliant actor who plays a skilled hacker trying to solve the mystery around the disappearance of his cousin’s girlfriend in the new film. Today, Faasil is a key figure of the New Wave in Malayalam cinema along with other actors like Nivin Pauly, Dulquer Salmaan, Vineeth Sreenivasan, Parvathy Thiruvothu, Jayasurya, Rima Kallingal and Remya Nambeesan.

C U Soon is the fourth film Faasil has produced under his banner Fahadh Faasil And Friends. (Ask him why that name and he says, “I function with all my friends. It’s nice; I’m not alone.”) The film is a 90-minute thriller, directed by Mahesh Narayanan that started as an experiment, was shot under the coronavirus lockdown protocols and wrapped up in 18 days.

But Faasil is no stranger to risk. He produced Kumbalangi Nights last year, a beautiful story of four brothers harbouring emotional hurt, who live in a fishing island in a house with no front door and no women. Faasil chose the role of the egotistic antagonist Shammi, instead of playing one of the protagonists. He says he only discussed the role with his wife Nazriya Nazim before he signed on, warning her that the audience may not accept him as this toxic, creepy character. It didn’t deter him, though. Kumbalangi Nights was a runaway commercial and critical hit, awakening even more audiences to Faasil’s brilliance and uncanny instinct, as an actor and a producer.

2019 turned out to be a winning year. Faasil played a man humiliated by his cheating wife in Thiagarajan Kumararaja’s gamechanging Tamil hit Super Deluxe. He’d been itching to work with the director after his last film Aaranya Kaandam (2010) blew his mind. When it became clear that he wasn’t having any luck convincing Kumar to make a Malayalam film with him, he took the role in Super Deluxe despite being uncomfortable acting in Tamil. Asked how he adapted to the filmmaker’s infamous tendency to shoot literally hundreds of takes for each scene, Faasil laughs. “With Kumar he will tell you why he’s going for retakes. I like to explore and look at the possibilities, even if you’ve got the right take. I don’t think that it’s right for actors to get tired of doing multiple takes. It’s their job,” he says.


It helps that Faasil knows no other way but to be completely immersed in his craft, eager to experiment and exacting as an artist. He has no vanity; metamorphosing into scruffy parts, unconcerned about acquiring a six-pack, nor bothered by his receding hairline. But he does have a unique physical gift—his hazel, light eyes. In Thondimuthalum Driksakshiyum (2017), we are introduced to his character, a small-time thief, through just his eyes, zeroing in like lasers on the gold chain worn by a passenger on the bus.

People watch the films in Malayalam and take the effort to understand them. That itself is a big thing for us, says Fahadh Faasil, actor

Annayum Rasoolum (2013) is arguably the film that has best exploited Faasil’s expressive eyes. When his Rasool falls head over heels in love with Anna, he stalks her as she takes the ferry every day, his eyes following her every move. She catches him staring and turns her back on him. Rasool blinks, his eyes flicker, turning from love-struck to hurt. He flicks his gaze away, looking out at the sea, smarting from the rejection. It’s a master class for young actors.

Excerpts From A Conversation

You have an uncanny instinct for picking interesting material. What is your approach?

I always believe that if I pick the right filmmaker 50 per cent of my job is done. What one hopes for, of course, is to be able to do the right film with the right maker. A person like Mahesh [Narayanan] is capable of doing many kinds of films, but I wanted to do a film like C U Soon with him. I guess that’s the trade secret—if you want to call it that—getting the filmmaker to do a film that he’s also excited about; not one that only excites me.

But a missing-person thriller that unfolds entirely on computer and mobile phone screens has been done by Hollywood already, in the 2018 film Searching.

What was it like to be performing with no co-stars for the entire duration of the film? You’re only performing to a screen.

Honestly, no one knew this would be such a difficult task. We started shooting, and then early on into the shoot we had to stop because we weren’t getting the connection. So then we sat around a table and we started playing the scene like that—we would get the other actors to read their lines and we tried to get their rhythms. The exercise ended up being very interesting and became a real discovery. In fact, we enjoyed the process so much we’re thinking of doing a sequel.

The fact that it is not disorienting to watch a 90-minute film that takes place entirely on screens tells us a lot about how much of our lives we spend in front of screens.

Exactly. You know, I remember an interview [Amitabh] Bachchan did with Steven Spielberg some years ago, in which Spielberg said that what’s lacking in the world today is eye contact. No one has eye contact. Everyone is looking at their phone, or doing something. Even when you’re travelling, you’re not looking out of the window, you’re looking into your phone. The only place where we establish eye contact is on FaceTime or over virtual chats.

When a film of yours releases you like to hear from those who enjoyed it, but you also seek out those that didn’t. What fuel do these critics give you?

For the first three days, anger (laughs). But to be honest my films are like that—not everyone loves everything in them. But most people are very excited about the new things they saw. Every time I decide on a film my biggest concern is, ‘Have I done this before?’ You repeat because you loved what you’re doing. And things that you get excited about, you will definitely repeat. Even without you knowing it, you will repeat it. So for me, when I get excited, the biggest fight is, ‘Am I repeating myself?’