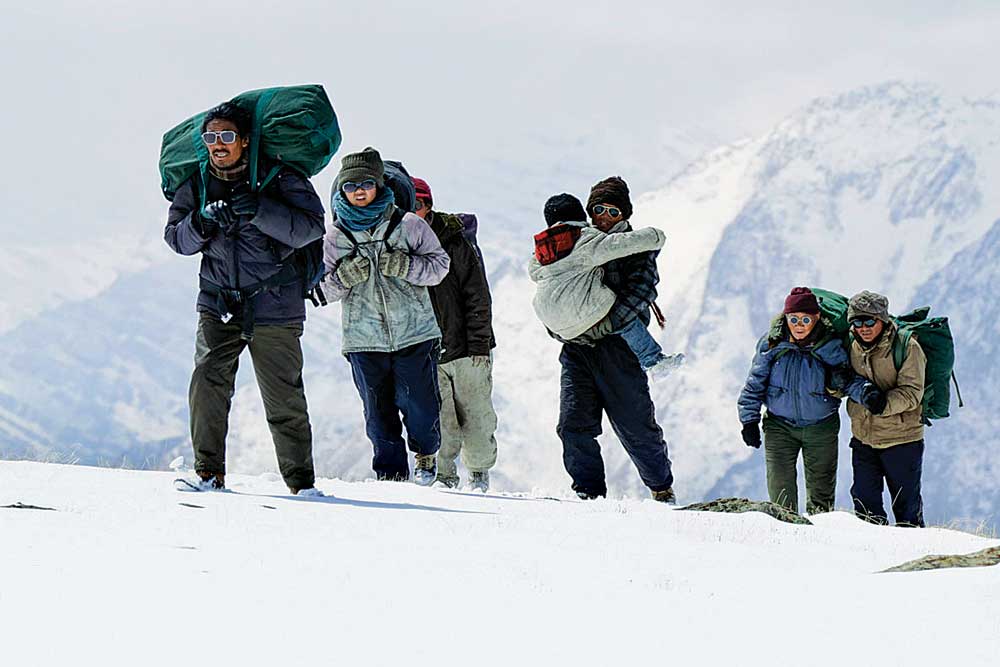 IN SEPTEMBER 2006, a few mountaineers camping at the 5,800-metre high Nangpa La pass along the Nepal-China border saw Chinese border guards chasing a group of Tibetan pilgrims. “At first, we thought they were too far away,” one of the mountaineers recalled later. “Then I [saw] a second group of soldiers closer to the edge of the pass and I knew immediately that somebody was going to die.”

A Romanian video journalist among them recorded what happened next. His footage, shot from nearly a kilometre away, shows the pilgrims heaving through ankle-deep snow in a neat file. Suddenly, one of the soldiers opens fire. A person at the head of the file falls but quickly gathers himself and hobbles away. There’s more gunfire. It claims a Buddhist nun, aged 17, walking at the end of the file. She crumbles on the spot. The pilgrims, battling a torrent of bullets and the looming threat of capture, move on helpless.

The Nangpa la shooting incident caused a global outrage. The US ambassador to China lodged a formal protest against China’s treatment of Tibetan refugees; the United Nations Human Rights Watch demanded an independent inquiry into the attack. In the comment threads of online news articles, most shared the horror of the mountaineers, one of whom is overheard saying, “They’re shooting them like dogs.”

Tenzing Sonam, a Dharamshala-based filmmaker of Tibetan heritage, remembers being stunned when he saw the footage in the news. He and his wife Ritu Sarin, also a filmmaker, had been working for the Tibetan cause for over two decades. They had heard many stories of Chinese soldiers intercepting refugees and pilgrims on their way to India; arresting, detaining, torturing, sometimes killing them. But this was the first time the state-sanctioned brutality was caught on camera. Soon after, he started scripting.

The Sweet Requiem, a 91-minute film based on the incident that Sonam wrote and co-directed with his wife, is only the second Tibetan language film from India. It tells the story of Dolkar, one of the many blue-collar Tibetans living in Delhi, and how a chance encounter with Gompo—a people smuggler who had abandoned her family shortly before Chinese soldiers intercepted them on their way to India—forces her on a journey of reconciliation and closure.

“In a way, it’s almost like a foreign language film,” Sonam says over Skype. “Indians mostly know of Tibetans as those who sell momos and sweaters. But they have no idea what our back stories are.” The so-called mainstream cinema hasn’t done its bit either. Nearly 100,000 Tibetans are estimated to be living in India, mainly in Delhi and Dharamshala. And yet, you’d be hard pressed to find them represented in Indian films. When scriptwriter Akshat Verma wrote the 2011 film Delhi Belly, its protagonist Tashi was meant to be a Tibetan. But the casting team claimed that none of the Tibetan actors they had auditioned fit the bill. Eventually, they cast Imran Khan, the wide- eyed nephew of Aamir Khan, the film’s producer.

To Sonam and Sarin, The Sweet Requiem has a personal connection that goes back decades. Fifty-nine-year-old Sonam was born in Darjeeling to parents who had escaped to India after the Chinese invasion of Tibet in 1950. During his childhood, his father would disappear for months. His mother would say his father was in New Delhi working for the Dalai Lama, who himself had escaped to India in 1959. But it wasn’t until Sonam was 15 and his father was arrested by the Nepal police that he found out the truth. His father was guerrilla fighter working for the Tibet liberation movement. His employers: the CIA.

In the 1980s, Sonam went to the University of Berkeley in California for a degree in journalism. There, he started dating Ritu Sarin who was studying filmmaking at the California College of Arts. The two would attend several pro-Tibet demonstrations and later founded the support-group ‘Bay Area Friends of Tibet’. By now, they were becoming increasingly conscious of the way Tibet was exoticised and misrepresented in the West. Sonam cites a scene of Seven Years in Tibet, a 1997 Hollywood drama starring Brad Pitt, where a Tibetan worker refuses to dig a ditch as he doesn’t want to harm any worms. “As Buddhists, life is precious for us,” he says, “but that doesn’t mean we won’t dig ditches!” And yet, he’d often find people surprised when he’d tell them that not all Tibetans meditate, that not all were vegetarians, that many, in fact, love to drink.

“Western filmmakers would show Tibet as a land of peaceful, compassionate monks. Some also made hard-hitting political documentaries but even they tended to see issues as black and white. Tibetans were being shown as one-dimensional people rather than just like everybody else. That was something Ritu and I felt we must tackle.”

“Indians mostly know of Tibetans as those who sell momos and sweaters. But they have no idea what our back stories are,” says Tenzing Sonam

After graduation, the couple moved to the UK and worked on a few documentaries for the BBC, including some on Tibet. In 1996, they shifted their base to Dharamshala, administrative capital of Tibetan government-in-exile and the current residence of Dalai Lama. Ever since, they’ve made over a dozen films and multimedia installations on Tibetans’ struggle for liberation, exploring how they intend to ensure the survival of their identity in the age of globalisation. In 1998, they documented the CIA’s involvement in the Tibetan liberation struggle in the documentary The Shadow Circus: The CIA in Tibet. Their first fictional feature, Dreaming Lhasa, also the first Tibetan language film from India, was screened at film festivals across the world.

THE SWEET REQUIEM received a standing ovation at its Asian premiere at the Dharamshala International Film Festival in the first week of November (the filmmakers are also organisers of DIFF). It stood out from a number of self-indulgent indie films that were part of the festival line-up this year. For one, it has nearly no major ethnically-Indian characters in spite of being shot in India. This narrative choice, apart from staying faithful to the rather insular lives led by many Tibetans, seems like a much-needed reminder of how Indian cinema generally overlooks the diversity of the country. More significantly, it is a story told without labouring on a ‘message’. The cast, comprising many first-time actors, is sincere and highly effective. With vivid portraits of the grimy ghettos of Delhi and the snow-crusted mountains of Ladakh, The Sweet Requiem is unpretentious, tightly edited and riveting.

As indie film-makers, the couple is long familiar with the difficulties of financing new projects. But it wasn’t the only reason it took them nearly seven years to complete the film. As China’s soft-power across the world increases, it has been increasingly difficult to find sponsors willing to fund subjects considered critical of China. The couple had had a few run-ins in the past already: at the Palm Springs International Film Festival in 2010, the Chinese embassy in the US withdrew two Chinese films scheduled to be screened in protest against the inclusion of Sonam and Sarin’s documentary titled The Sun Behind the Clouds: Tibet’s Struggle for Freedom. In 2016, an art exhibition in Dhaka was forced to cover up the couple’s photo exhibit titled Last Words, featuring five letters written by Tibetans who immolated themselves to protest Chinese rule.

“For example,” says Sonam, “the foreign ministry in Norway has a fund to facilitate independent films from our region. But the country faced a lot of problems after Chinese democracy advocate Liu Xiaobo was awarded the Nobel Peace Prize [in 2010]. The Norwegian government might have nothing to do with it [as the Nobel Foundation is privately funded] but the consequences were strong for them after China put up trade barriers. You could see it when the Dalai Lama went to Norway [in 2014] and no one from the government met him. If they now gave funding to a film like ours, the Chinese government could come down on them again. So they would rather reject the film.”

Eventually, the filmmakers approached a crowdfunding platform. They had aimed for $25,000, but received $33,889. The production, too, went smoothly, except for a few cases of altitude-sickness among the crew while shooting in Ladakh. But what the filmmakers seem most thankful for is that they haven’t had any interference by the Government. “Don’t put the thought in their heads!” quips Sarin, who had let her husband do most of the talking on Skype.

“It all depends on the Indian Government’s political status towards China,” says Sonam. “That usually determines whether those living in exile are useful or a hindrance. But for the most part, I think their policy is mostly to turn a blind eye and pretend it doesn’t know what’s happening.”

The couple is currently touring the festival circuit. In November, the screening at DIFF was followed by three more at Kolkata International Film Festival and then at International Film Festival of India in Goa. They consider these platforms crucial to get the word out. They know that an unconventional film like theirs might not see a theatrical release. There’s also the additional factor of censorship: the 2013 film Rockstar was forced to blur out a ‘Free Tibet’ poster that was part in the song Sadda Haq, although it was visible only for a couple of seconds.

But with the proliferation of online screening platforms like Netflix and Amazon, the filmmakers seem optimistic about the future of their film. And while it might have the typical recipe for commercial success, it certainly seems to have touched a chord with the Tibetan community. During the post-screening interaction at DIFF, a man of Tibetan heritage who’d presumably spent all his life in India told them, “In our school [for Tibetan exiles], we were always asked to write essays about the liberation movement. We wrote it, were aware of it, but never quite felt the extent of it. Until now.”