Here’s Goa gone awry. But it is still a watchable movie 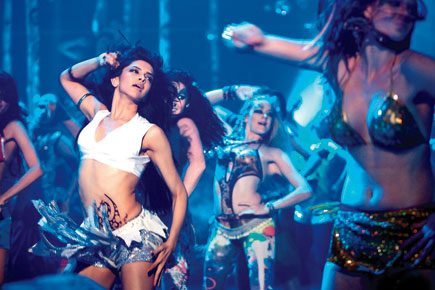 Here’s Goa gone awry. But it is still a watchable movie


Dum Maro Dum portrays ‘paradise lost’, the demise of Goa. In this film, several decades after the transition from Portuguese to Indian rule, Goa is now a neo-colonial destination controlled by a European underclass that has organised itself into a mafia. In a police briefing on the narcotics trade in the movie, we see the division of the state into areas controlled by nationalities that include Russian, Israeli and British.

The film portrays Goa International Airport as the exit hub of the Indian drug trade, and young men with US student visas and compromised airline stewardesses as carriers. The Chief Minister of Goa cracks down and appoints ACP Vishnu Kamath (Abhishek  Bachchan) as his point man. It is an odd choice. We are told that till his family was killed in a car crash, Kamath was corrupt.  Bereaved, he is integrity personified.

This sort of meddling with human nature reduces the impact of a reasonably watchable thriller. Characters float around without anchor, possibly part of the Goan  posture of sosegado (live and let live), but detrimental to believability. Student  Lorry Gomes (Prateik Babbar) is a topper who has got admission to a US university but he agrees to the insanity of carrying a suitcase stuffed with cocaine on his way to America.  How did he top his class?

Paced well and with an innovative narrative that goes back and forth with individual stories, Dum Maro Dum travels four decades from the Kathmandu of Hare Rama Hare Krishna and arrives in sleazy Goa minus the crown jewel, Zeenie Baby. Bipasha Basu and Deepika Padukone are not even close. Nearest  is a Brazilian knock out with an Indian face and a body from the Rio carnival. She plays a seducer called Rosanna (Mariah Pucu) and has attitude. Dum Maro Dum is chipped china, but in the context of recent Hindi movies, at least you are drinking from crockery.